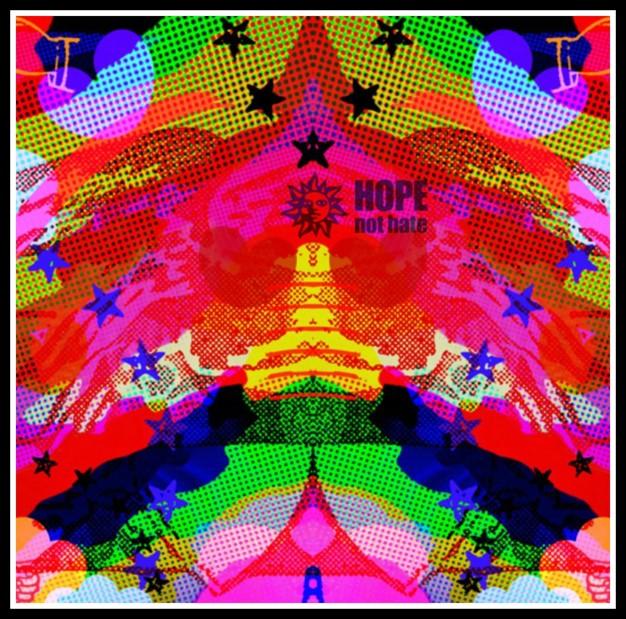 Released as a bargain £5 download this Friday, #MoreInCommon is a compilation album consisting of contributions from 90 artists that aims to support the charity Hope Not Hate.  Founded in 2004, the charity exists to provide an antidote to the politics of hate.  In light of the Brexit vote and the murder of Labour MP Jo Cox ealier this year, they have been hosting regular #MoreInCommon events to promote unity across the country.

Hi, Simon. Where did the idea for the #MoreInCommon charity compilation come from?

“After I started the Carmarthen branch of the Hope Not Hate charity, we were knocking around some ideas, as it didn’t feel like it was enough.  I had a friend called Martin who had done a compilation for the Macmillan Cancer charity, so that gave me the idea.  I put the word out to see if anyone was interested and it went from there.”

What is the #MoreInCommon campaign?

“It’s a campaign started by Hope not Hate after the murder of Jo Cox.  After she died, she donated money from her will to the campaign.  And the phrase comes from a speech she made in Parliament when she said ‘We have more in common than divides us.’  So it was a national campaign of events with the #moreincommon hashtag.  I thought if I tied it in with that and put the hastag in the title, then it would get more attention and interest using Twitter for what its good for.  It’s a really good campaign.”

How many tracks are on the release!? I see you are bidding for it to be the longest compilation ever?

“It’s 90 tracks long now, it features Beak which is the band Geoff Barrow from Portishead is in.  Matt Williams who is now MXLX and was also in Beak, he has also donated a track separately.  Chris and Cosey have donated a track too; they were the founding members of Throbbing Gristle – that’s the pinnacle for me.  Chris started following me on twitter after I reviewed them.  I just tweeted him asking if he would like to donate a track and he said ‘What’s the deal?’ and then he sent me one.  The power of Twitter!”

Who else should listeners look out for on the compilation?

“I have to mention Thought Forms; too, they’re from Bristol, I have seen them live a few times now and they’re the strongest British band out there in that genre, they gig really hard.  Their second album Ghost Mountain is incredible it was my album of the year.  It’s like Sonic Youth; it’s got that doom stuff, and pop stuff – they throw everything in the pot.  They have an album out next month called Songs about Drowning and its sensational.  With that, they’ve finally found their unifying sound and it’s incredible.  They have grafted so hard.  They are playing in Cardiff on the 14th of February. I just watched them at Green Man in the summer,  they’re just one of those bands that click with you. ”

“Outside of the more well-known artists, I was so happy to have lots of unsigned, and up and coming talent.  Every single artist has been incredibly supportive and I wouldn’t want to single anyone out as each of them deserves a tip of the hat.  They’ve nailed their flag to the mast, so to speak, and by being involved have shown exactly what music can do.  I would like to mention Mared Lenny (SWCI Delic) who did the album artwork.  It’s such a positive and bright colour.  She was the first person I thought of when I had the idea for the album so was ecstatic when she said yes.”

How did you gather so many contributions to the compilation?  Did you approach them or did they approach you?

“I just went on a Twitter and email spree, contacting all of my followers.  I had a few people who offered to donate a track, I think I have only had one person who said they couldn’t do it but to be fair they were just releasing an album.  They still gave me a lot of support; their heads were so far into that album, but they’ve all given me help in other ways promoting it online.  There has been so many people who have been really positive and helpful with the release, it’s been great.”

Out of the lesser known acts on the compilation who would you pick out?

“I do love Lippy Kid who is Northern!  He’s really good and I like him quite a lot, he’s a really great guy.  There’s stuff by coming out on a Carmarthen label there’s stuff that’s from around this are who have been helping, too.  Not everyone is going to like everyone who is on it; it’s like a lucky dip, but instead of rotting your teeth you are helping someone.  I just did a pre-release on Bandcamp and pre-orders; we’re up over £200 already!”

So how much is the compilation?

It’s a fiver.  It’s a bargain!  I made it a reasonable price on purpose because times are hard for so many people and I would rather people hear it and support it.  It’s more important that people get involved in the charity.  A lot more people can afford a fiver; if you go above that it may put some people off, it’s all here to serve the charity.

Are you planning anything else in aid of the Hope Not Hate charity?

“I am hoping to plan for a series of releases.  I’d like to do a few hour-long mixes by producers, and do it like a free release on mixcloud or something.  It won’t be genre specific – we have hours of music we can put together and put it out under the Hope Not Hate banner, and maybe do a few vinyl releases in the future.  It’s got to be cost effective as it’s for charity at the end of the day.

I have been talking to Matt, who owns the Parrot, and we are looking to do one in November.  We’re gonna do one show then to see.  After the American election, we’ll get some of the bands on the album to play.  There’s a lot of people giving it good support here. There’s a band down here called Tits Up who are powerful funny women; they dress like the B-52s and draw good crowds. Then maybe we’ll do a show in Cardiff in the new year.  Matt is giving us the venue for free and the bands so its all about raising money and awareness of the charity and the good work they are doing. ”