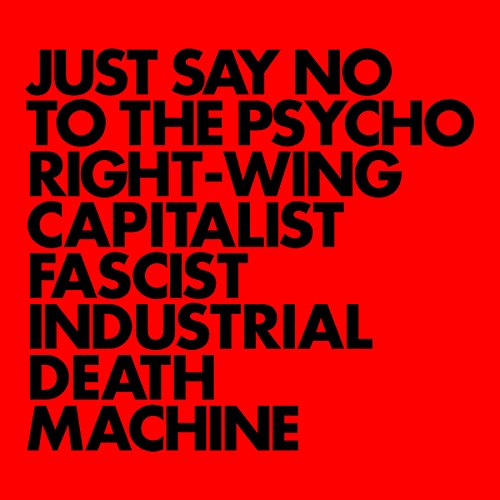 Based in Salford, Greater Manchester, Gnod have established themselves over the last decade as a force to be reckoned with. Incorporating krautrock, noise, punk and other influences, their rotating line-up consistently makes for a breath of fresh air. Brexit, Trump and right-wing populism have ignited something in art. Potent politicised music is alive and well no matter how many miserable ageing punks and hipster think-pieces try to tell you otherwise. How is it possible for artists to be politically apathetic in times like these? The messages behind Just Say No To The Psycho Right-Wing Capitalist Fascist Industrial Death Machine hardly need explaining. It’s all in the title. Five songs spread across a vast, stimulating 40 minutes, this is an unmistakably flawless Gnod record.

Opener ‘Bodies For Money’ adopts a unashamedly simple riff over vocalist Paddy Shines‘s distant cries of “you can keep your fucking money”. This breaks down into guitar feedback lingering over Shine’s taunts of the song’s title before the whole band beautifully ascends into an unrelenting finish, imprisoning the listener to the very last note.

The few lyrics of ‘People’ are largely incomprehensible as sound craftsmanship takes centre stage. It begins with a psych-infused droning noise carried through half of the song. Eventually an ominous bassline joins the unpredictable track with Shine repeatedly shouting the song’s title. The middle part involves a confused cacophony of voices from the airwaves – sounds of media commentators crashing into each other, which are simultaneously stabbed at and held together by driving drums. Out of nowhere the whole structure built up over a good six minutes come crashing down.

Listening to ‘Paper Error’ may take a few moments to recover from. I was so stunned by its impact on first listen I could barely get the words together for this review. Frenetic and punishing, this five minutes of controlled chaos is the shortest song on the album. Penultimate track ‘Real Man’ tears apart masculinity standards on what is arguably the most accessible and most dance-able song on the album.

As profoundly brilliant as those four songs are, nothing quite compares to ‘Stick In The Wheel’. This 12-minute closer finally gets to the crux of the album’s title as Shine bemoans, “how many times will I sell my soul? / I wanna be a stick in the wheel / don’t wanna be a cog in the machine”.  The metallic feel of the first half of the song is maintained by superb drumming decorated by spluttering guitar hooks. There are few people – perhaps just the powerful ‘1%’ – who wouldn’t be able to relate to the lyrics of having one’s labour exploited under capitalism (“pushing paper just to stay alive”). It’s easy to fall into dull clichés using an us-against-them mentality when talking about power structures, but Gnod avoid this with an unusual finesse. The second half of this epic number enters a bare, eerie void sending you into a mild hypnosis before ever so slowly fading out into the unknown. The unsettling ending is surely reflective of the unchartered territory the world is about to embark on.

The songs Gnod create are more or less in a league of their own to the point where flimsy words simply cannot do them justice. This album is both so enticing and so uninviting at once, perhaps intended to be as oppressive as the world we find ourselves in. If only it were as easy as ‘just saying no’ to the capitalist death (etc.) machine. Saying no is just the first step in trying to galvanise people against said machine but at least that’s a lot easier when you have a soundtrack as perfect as this.