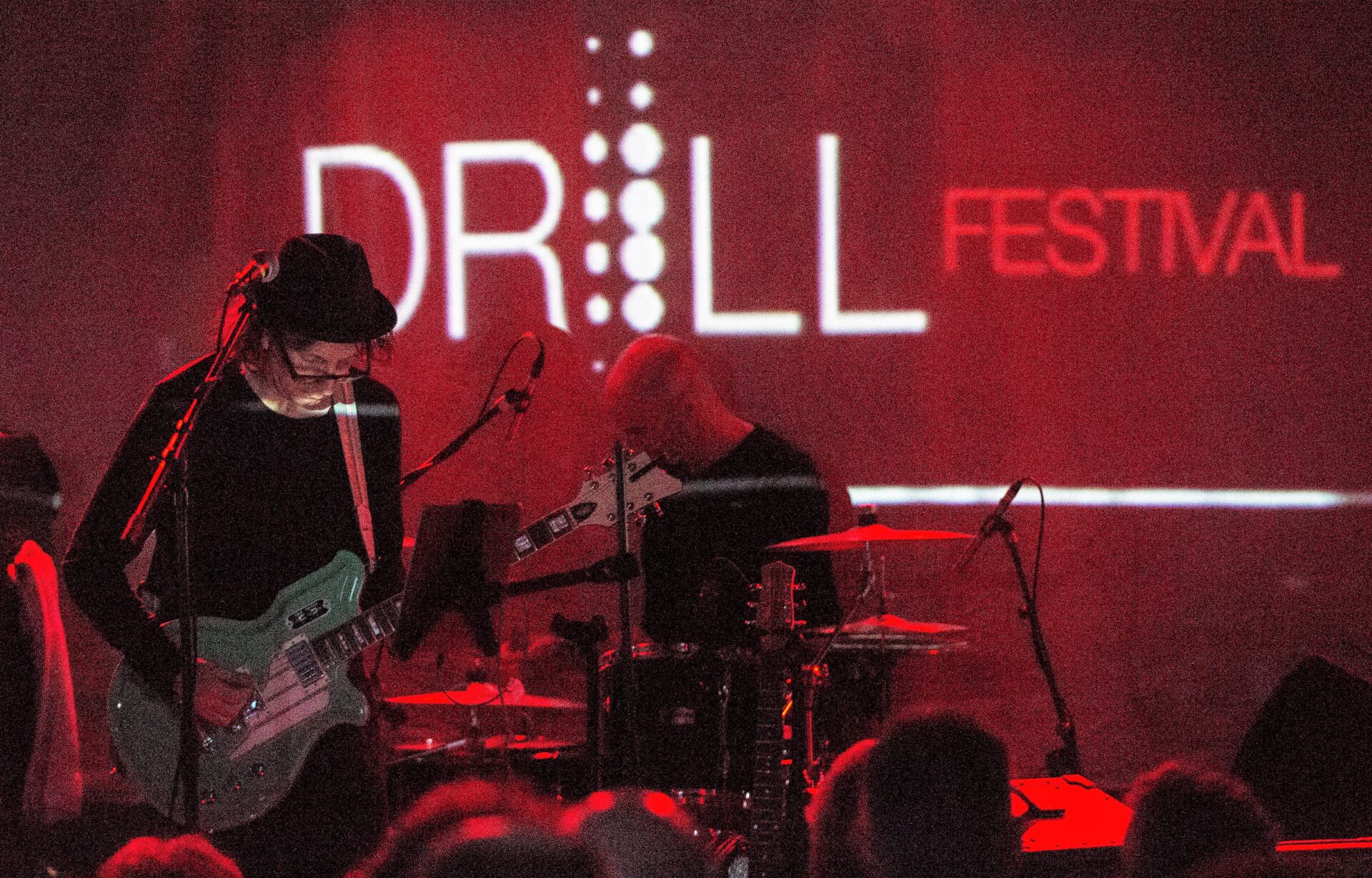 Don’t look back. This is the mission statement for both Wire and DRILL, the specially curated festivals presented by the band for whom the term post-punk pioneers was most surely invented. Wire have just marked the 40th anniversary of their first ever gig at London’s the Roxy; DRILL is now into its fourth year of existence. Regardless of each other’s duration, though, both band and event adhere firmly to the same guiding principles of deconstruction, innovation and evolution.

Starting in London in March 2013, DRILL has since visited Seattle, Brighton, Chicago, Los Angeles, and Tilburg in The Netherlands. It is next destined for Berlin and Brussels and along the way has hosted artists as visionary and disparate as Earth, Swans, St Vincent, Tim Hecker, Bob Mould and Tomaga. This weekend, DRILL lands in Leeds, West Yorkshire. Friday night, a free entry event is headed up by the local post-sonic absurdists Zozo with Michael Rother – the former member of three of the most influential German bands of all time, Kraftwerk, Neu! and Harmonia – closing out this particular DRILL proceeding late on Sunday night. 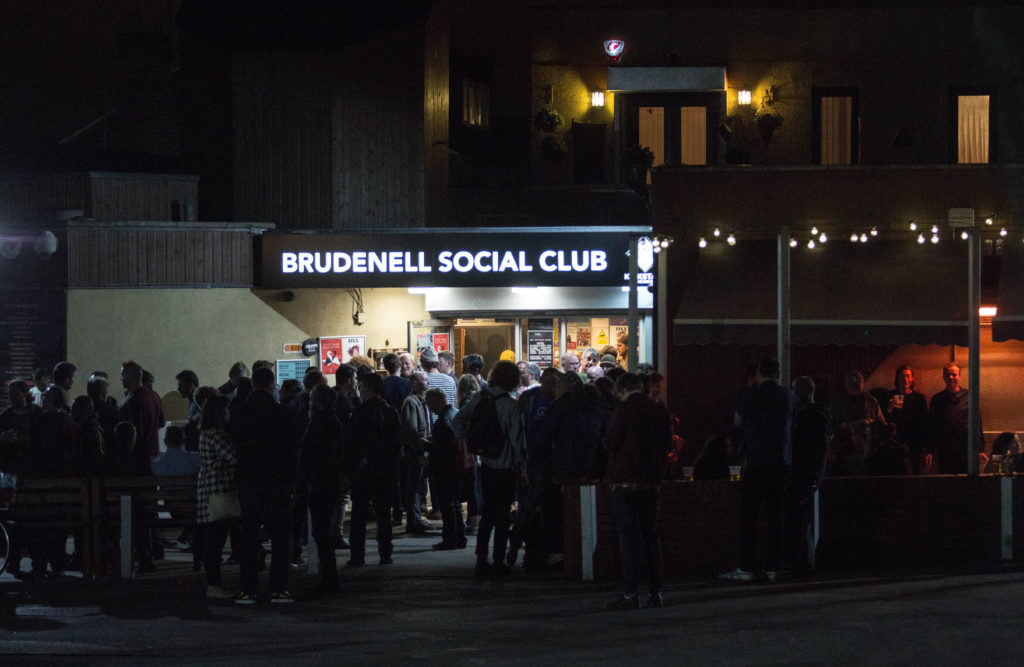 The centrepiece to DRILL: Leeds, though, is on Saturday and in keeping with the entire festival, it is held within the wonderful confines of the famous Brudenell Social Club. Arriving mid-afternoon we readily accept Golden Meat’s warm invitation to gather around his televisions in the Brudenell’s main concert room. The musical creation of James Islip, the drummer from That Fucking Tank, Golden Meat produces a welter of electronic industrialised noise that reflects the flickering static caught on his analogue screens. It may well be bright sunshine outside but this is the perfect introduction to a musical twilight zone.

What then follows is a fairly seamless procession between the Brudenell’s Main Room and the smaller capacity Games Room. Appearing in the latter, another local product, Azores, repay handsomely their debt to their early ’80s Talking Heads influences with an incredibly tight set that connects angular rhythms with Afro-beats and dance-oriented grooves.

Cindy Lee is the experimental pop project of Patrick Fegal, the former singer/guitarist with Canadian cult band Women and Cindy Lee brings with her to Leeds a dark musical dissonance that is both disconcerting and strangely comforting. With elements of the New York No Wave avant-garde and shadowy industrialised disco-pop caught in its cross-hairs, Cindy Lee’s musical vision is both reductive and riveting.

Joeyfat may hail from Tunbridge Wells but there is nothing quite that ordinary about them.  The trip up North has clearly disoriented frontman M Edward Cole with regards to time and place as he has festooned himself in fairy lights and donned a matador’s cape for the occasion. A whirlwind of personality and presence, he stalks the Games Room floor in front of a delightfully abstract, polyrhythmic backdrop of sound whilst all the while speaking in tongues and looking for ministers in his imaginary cabinet.

Clinic have now kept Merseyside’s surgical face mask suppliers in very good business for more than 20 years. Somewhere along the way, they have also found the time to entertain us with music that distills the central components of psychedelia, strangeness and charm. Age has furnished them with greater consistency and in clearly passing the DRILL litmus test for inclusion, a weather eye for quiet evolution.

Another band who have been knocking about for over two decades is Leeds’ Bilge Pump and they close out the day’s Games Room schedule in typically uncompromising fashion. Singer Emlyn Jones once more advises us that the Lord may well giveth, but in Bilge Pump’s case, he clearly does not then take it all away.

With more than five hours having passed by in the blink of an innovative eye, the action then reverts to the main room for the rest of the night. Shobaleader One comprise Squarepusher’s Tom Jenkinson on bass guitar alongside Arg Nuition, Strobe Nazard and Company Laser on their respective guitar, keyboards and drums. These may not be their real names, but there is absolutely nothing disingenuous about the incredible sonic storm that the four men kick up. In an insanely frenetic 60 minutes the quartet rattle through a breathless nine-song set from ‘Iambic 5 Poetry’ to ‘Journey To Needham’. In their dark robes and Star Wars’ helmets, Shobaleader One resemble four regenerative druids transported here from another planet. Their music is similarly intergalactic; a cosmic hurricane of immeasurable force, it manifests itself as some huge neo-progressive jazz rock beast.

In 1986 after a five-year hiatus, Wire reconvened and released the Snakedrill EP. Taken from that record, the song ‘Drill’ not only set Wire out on a journey of never looking back it also provided them with the name for this festival. Further evidence of the band’s resolute refusal to never sacrifice the musical mother of invention on the altar of nostalgia is found tonight as they mostly concentrate on material taken from their 16th album, Silver/Lead, a record that clearly shows Wire still pushing at the parameters of creativity. There is a clarity of new ideas in Wire’s compelling performance which confirms that the only possible direction of travel for both them and this inspired festival is forward.

More photos from DRILL: Leeds can be found HERE