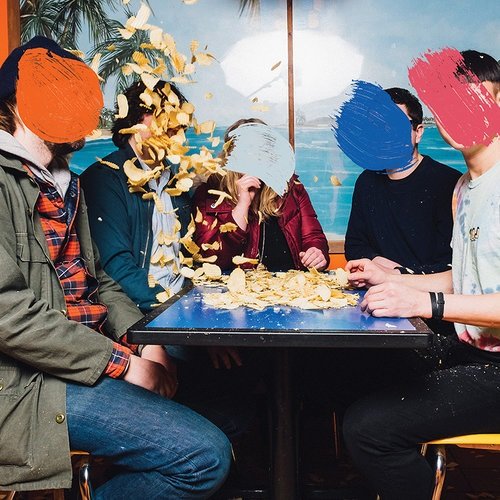 Google Lab Coast and you’ll get Lab Coats. Whilst being far from stark and clinical, they certainly seem to have nailed the scientific plan formula for hook laden guitar pop. They’ve got a pretty hefty back catalogue, having been strumming away since 2008, but new eponymous album Lab Coast will be the Canadian band’s first official UK releases. It contains sixteen tunes from their history, picked by the band themselves and Faux Discx overseer Dan Reeves. Despite being a cornucopia of tunes selected from across their many albums, eps, singles and releases, there’s a perfect pace to the compilation.

It’s both a great celebration and introduction to the band. Most of the songs have been written, recorded and produced in their Calgary basement, and this album of wonky tunes glistens with authenticity.
Led by songwriting duo singer David Laing & multi-instrumentalist Chris Dadge, the five piece (Chad VanGaalen, Bug Incision, Samantha Savage Smith) have been playing with recording techniques, embracing all things analogue, introducing various instruments into the mix, which all adds to the wholesome exuberance. From brisk blast of fizzy pop to more languid and intriguing pieces, the talent is clear, even if a trajectory isn’t.

The album starts off with ‘For Now’, a catchy tune filled with the lightness of spirit and sunny energy they’ve demonstrated on countless EPs, songs, albums and collaborations to date. Clearly enjoying the ride themselves, they manage to bring us along on it. Energetic riffing and lo-fi production combine in fuzzy wonderfulness and askew textures throughout.

Smashing out pop beats and hazy guitar hooks throughout there’s nothing that indicates being ‘Bored Again’, despite the song title. ‘As Usual‘ loops around the repeated refrain, with a horn melody underneath, completely unusual in style and resisting typical pop tropes, whilst next track ‘Away From Here‘ follows in this manner, by apparently beginning with tapping paintbrush on a tin can.
‘Better Than Me’ sees distorted vocals mingle with simmering melodies, whilst ‘Remember the Moon Jnr’, taken from the fourth full-length LP is a deliciously offbeat piece of scuffed, grooving psych-pop that starts of a la Revolver era Beatles.

I have no idea who ‘Helen Bach’ is, but she brings a sense of woe and pulls back the pace a little, monotone vocals and twisting steadiness. ‘I Saw You‘ almost gets hefty chords and riffs, full in sound and potency through its distorted swollen base and compulsive oily ambience. At only 58 seconds long, ‘Winter Balls’ would usually be considered an interlude, but a strong base and fast fiery pace keep it whole. Next track ‘Guessing Again’ is a dreamy piece of humming charm, a little romantic and lighter, whilst final tune ‘I Saw You’ twists with misaligned guitars and relentless rhythms.

Consistently charming and jangly, it’s a varied and engaging collection of tunes.
You can still hear the characteristic sound, whilst they spin and experiment out with vague exploration but stay capricious and off kilter. Their lo-fi slack stirs throughout the album. Like their career, Lab Coast is a patchwork combination of disparate threads that revels in the ordinary and excels in the hazy beauty of life. Fantastic.

Lab Coast is out now on Faux Discx.