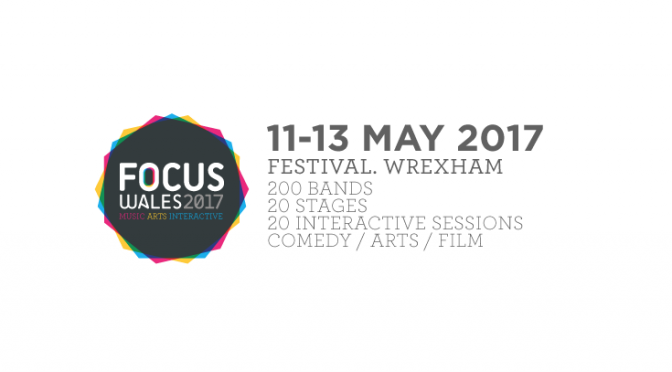 SXSW in Austin; the Great Escape in Brighton; Focus Wales in Wrexham. Don’t laugh; Focus Wales is a showcase festival to rival the best. But unlike the other two events, you won’t spend an entire weekend trekking across town to find yourself at the end of yet another queue. Wrexham might still be feeling the effects of the recession, with several empty shop units, but it also has a burgeoning arts scene that has taken over many of these disused units, turning them into galleries and venues. This year GIITTV even have our own stage.

Un Deg Un, for example, is a former Sports Direct. The current exhibition of various video art installations casts flickering shadows on the main venue, while upstairs the Void is a warehouse space bathed in red light. The rough-and-ready finish can’t match up to Cardiff art rockers Palomino Party‘s glamour, their frontman high-kicking and slut-dropping round the stage in stacked heels to their new wave stylings.

The gothic pillars of St Giles’ church are illuminated pink and little battery-powered tea lights sit on the pews. Golden Fable and the NEW Sinfonia are a match made in heaven. Their melancholic folk is embellished by, but not lost among the strings and woodwind. Singer Rebecca Joy’s angelic voice was made for singing amongst the cherub statues high above her head.

Back at Un Deg Un, Korean noise pop band Say Sue Me’s sunshine melodies and jangly guitars are having quite an effect on one particular man in a psychedelic shirt, as he throws himself around with abandon. The balance between new bands from far-flung corners of the world and established Welsh artists is demonstrated nicely by the fact that upstairs local scene stalwarts Camera show why their Wurlitzer-powered indie rock has kept them gigging for 15 years.

Georgia Ruth demonstrates why she won the Welsh Music Prize with her beautiful indie pop interspersed with “Welsh sea shanties via Norway and Liverpool”. When she’s not singing in her native Welsh, her thick accent lends her voice an uncanny timeless air as if she could sing a song she wrote yesterday and it would sound like a traditional Celtic folk song. Mesmerising.

Friday sees the GIITTV stage blessed by the likes of weirdo folk hero Meursault and brilliant fuzzy indie rockers Lush Purr. Lush Purr in particular create the trickiest kind of festival dilemma, taking the stage at the same time as Wrexham’s very own Baby Brave, showcasing their forthcoming EP, and the wonderful John Bramwell from I Am Kloot. Fortunately for us, one of these clashes is resolved due to some less fortunate technical issues; Love X Stereo are rescheduled to open up Rewind on Saturday. Their widescreen electronica is an exhilarating way to start the day, singer Annie Ko’s powerful vocal performance set to a shoegazey wall of affected guitar combined with a flickering ‘80s synth bass. They leave quite the impression on the small crowd nursing the previous night’s karaoke-fuelled hangovers.

Heal the Last Stand are feeling the effects of last night as well, but they don’t let it affect their close four part harmonies to the delight of an overflowing Oriel gallery. The tiny room means people spill out onto the street outside but the warmth that comes from the band makes it feel like we’re all part of the family.

Over at Central Station Dusky Grey may have recently signed to Warner and boast 400,000 Spotify plays but their looped guitar and soulful vocals is nothing too exciting and they play to just a couple of dozen people. To be followed by Chester’s excellent Peaness who’ve just signed to Alcopop Records proves to be a pronounced contrast. Their brilliant little harmonies and indie pop sees the smaller room full to bursting and their fuzzy, surfy hooks are super infectious.

Eyre Llew play to a sparse crowd at Rock Suite beneath Central but the few here can really appreciate how they’ve grown into their Sigur Ros comparisons. Their sound is fuller bodied, more accomplished. The swells are more epic, the crescendos are more explosive. They’re followed by Crosa Rosa, who are all chunky-as-fuck riffs and hair swinging in their faces. Their grungey noise rock has diversions towards Pavement-style riffing and sludgy metal. There’s a lot going on here, and it’s all very promising.

Seazoo‘s glossy indie pop inspires some furious dancing from the throng awaiting headliners British Sea Power, perhaps because they’ve played Central Station a thousand times, and perhaps because their laser guided melodies are completely joyful and irresistible. When BSP do arrive it’s to a packed-out if slightly muted crowd. With recent single ‘Keep On Trying (Sechs Freunde)’ they have the crowd firmly on-side, though dedicating it to “the Shrewsbury massive” elicits a playful chorus of boos. In a set front-loaded with mid-tempo songs, they improve as the set goes on, closing with a triumphant one-two of ‘Waving Flags’ and instrumental ‘The Great Skua’.

A quick trip back to Un Deg Un sees the biggest queue of the weekend, but then Islet are the only remaining band of the weekend. They begin their set walking through the crowd with bells. Their style of rhythmic, tribal noise involves variously climbing on the barriers chanting and bands members throwing themselves around the crowd. It’s all very chaotic but very, very good. Those who make it to the end are very pleased they do as Focus Wales has saved the best til last.

Focus Wales brings life to Wrexham and shines an important spotlight with their showcase events. The panels in the afternoons, from the DIY PR panel (hosted by GIITTV’s own festival editor) prising tips such as not sending music to people who don’t write about your sort of music and make sure you’re using the right name to the digital innovations panel that looked at everything from creating new kinds of sound with virtual reality and binaural microphones and just making sure the room you’re recording in sounds nice. The small, close venues and welcoming atmosphere make it feel like everyone who attends is part of the local scene for a weekend. That close-knit atmosphere is summed up as we leave Un Deg Un to find half of Heal the Last Stand playing ‘Yesterday’ by the Beatles on the upright piano outside the venue surrounded by a small crowd in the rain. Not many festivals bring people together quite like that.