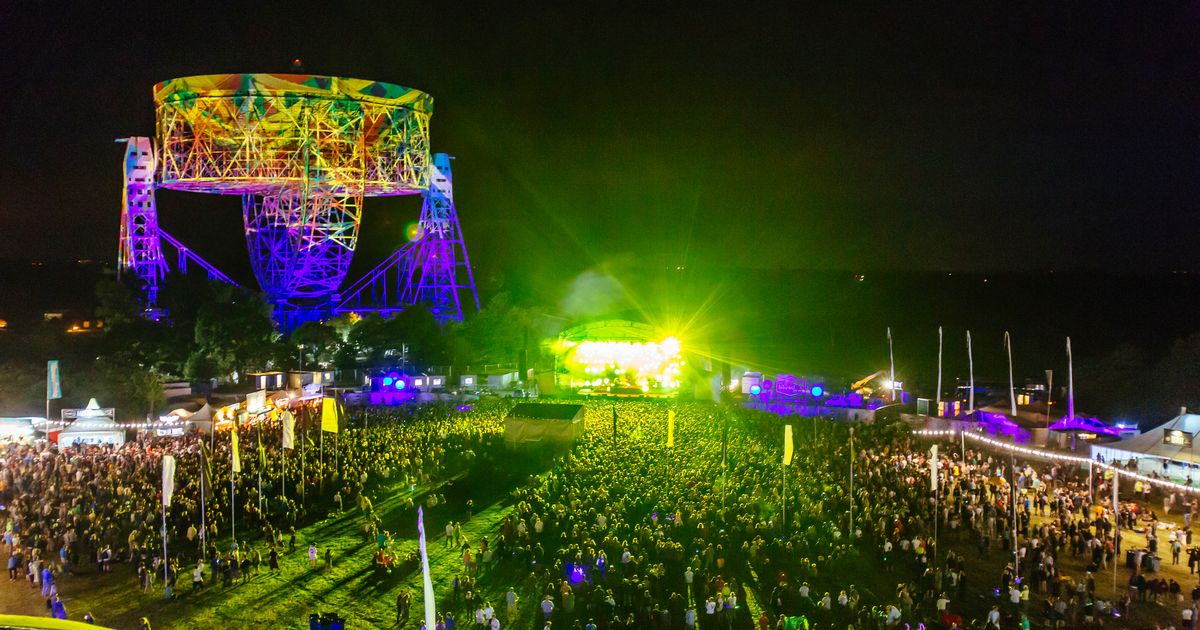 There are well over 1000 established music festivals currently in operation. Over one thousand. How in the world can a newcomer expect to stand out, you might wonder. Bluedot has taken up that challenge and has played a winning hand – pitching up in the shadow of Britain’s leading astronomical site Jodrell Bank, they have curated a festival that brings together the distant cousins of modern culture, music and science. Now in its second year, Bluedot is confident and relaxed, secure in the knowledge that it has found the magic formula.

Upon arrival on Friday morning, the ambience is immediately striking: this is not a festival to scramble around at breakneck speed, nor start the day with a concoction of foreign ingredients to get in the right ‘frame of mind’. No, this is a relatively small-scale site filled by people of all ages, all looking thoroughly delighted to be here, all taking turns to gawp in disbelief at the genuine wonder of the Lovell Telescope, the world’s third largest such structure, as it looms over the main stage, an edifice to human achievement.

Friday’s line-up, as the rest of the weekend, is evenly split between music and science, but the quality of the line-up on the Lovell Stage is far too enticing. Meilyr Jones has the honour of opening proceedings, parading tracks from his vastly underrated album 2013. Betrothed in a flowing robe, he is at ease and humorous, with ‘How to Recognise a Work Of Art’ providing the crowd with its first chance to shake their hips. Jane Weaver’s music screams Bluedot, complete with sci-fi synths and celestial subject matter. The woozy looseness of her band’s playing is spacey enough that I half-expected the telescope to turn towards the stage. New cuts like ‘Slow Motion’ are at least a match to old favourites ‘I Need a Connection’ and ‘Don’t Take My Soul’.

The Moonlandingz ensured their booking here the day they named their band. You don’t know where to look when they take the stage – is it the pork-pie hatted Adrian Flanagan on the keys who surely must have been in a two-tone ska band back in the day, or Mairead O’Connor in her role as the world’s least interested guitarist. Of course, it’s hard to ignore frontman Lias Saoudi, aka Johnny Rocket, whose red wine I can smell from the front row. As a band, they are every mother’s nightmare, a flaming disgrace of a gang, determined to single-handedly lower the tone. ‘Sweet Saturn Mine’ and ‘Black Hanz’ are as committed and delirious as anything all day. Ezra Furman is one of the few with the chops and rock ‘n’ roll spirit to follow them, his set crammed with huge, accessible hooks. ‘Lousy Connection’ remains his standout moment, one that gets even those unfamiliar with it singing along.

For such a relaxed crowd, the prospect of Pixies might seem analogous, and true enough the ease with which one can walk to the front of the crowd at the start is staggering, but they are able to fire themselves up into enough of a frenzy to seize the moment eventually. The litany of classics that spills out of the band is bewildering, with nary a moment’s breath between tracks for the entire duration. Nearly every track feels big, but in a crowd of giants, it’s still the beasts from ‘Surfer Rosa’ and ‘Doolittle’ that command the greatest reactions. Black Francis’ voice is completely unchanged since those records first hit shelves, flitting with ease between a gentle drawl and his trademark serrated screech. ‘Monkey Gone To Heaven’ is an early one out of the blocks, with the immortal “rock me Joe” line reverberating as loud as any other line. Joe(y) Santiago duly obliges, his arched figure in the darkness so familiar, his riffs so completely intact. New bassist Paz Lenchantin ably duplicates the iconic Kim Deal parts, although notably the big Deal lead vocal ‘Gigantic’ is left off the setlist. Tracks from the recent albums are present, but understandably less lovingly received, but between ‘Where Is My Mind’, ‘Hey’, ‘Debaser’ and ‘Velouria’, we are treated to the full dream set.

On Saturday, the focus turns to Bluedot’s non-musical offerings. The array of speakers is immensely impressive, professors, broadcasters and academics at the top of their fields, invited to indulge the audience in their favourite subject. Mike Barrett, the Director of Astrophysics at Jodrell Bank, gives a mind-warping and hopeful insight into the search for extra-terrestrial life; The Sky at Night presenter Chris Lintott proves the true power of a great communicator in his hilarious talk on his crowdsourced Galaxy Zoo project; and local hero and Jodrell Bank Associate Director Tim O’Brien makes several appearances, notably a talk on the legendary ‘Golden Record’ that was launched into space in 1977. It isn’t just astronomy either: writer Frank Cottrell-Boyce is a heartwarming public speaker, easily establishing an admirable rapport with the children in attendance before giving a moving reading from his 2011 book The Unforgotten Coat.

The Lovell Stage climaxes on Saturday with a double bill perfect for the (not insubstantial) forty-somethings at the festival. Goldfrapp bring their gorgeous, slinky, sophisticated synth-glam to the party, and the crowd grows throughout. For the aforementioned demographic, Goldfrapp are perhaps a representation of the somewhat more bourgeois existence that they enjoy these days, kids at their feet. They are encouraged to live their life in reverse tonight, as following on from Alison and band are Orbital, whose music surely soundtracked so many of their coming of age experiences. Arriving on stage to the sound of manipulated pulsars, they obviously understand the Bluedot experience. Elsewhere, however, a younger crowd amasses at the Nebula Stage for indie-punk quartet Dream Wife. Their set is teeming with the suppressed angst of youth, with ‘Hey Heartbreaker’ and ‘FUU’ (three guesses at what those letters stand for) exploding with frenetic energy. Frontwoman Rakel Mjoll wears the smirk of a predator that knows its prey is cornered, her faux naïveté not convincing anybody. They finish with ‘Somebody’ and its winning mantra of “I am not my body, I am somebody” – they are a band determined that you will remember them.

Sunday begins with an antidote to the utopian science discussions happening elsewhere – a talk led by The Observer’s Carole Cadwalladr on the prevalence of ‘fake news’ and what the last few sensible-minded people out there can do about it. The speakers supply a terrifying account of the reality of infosmog and the control that bots currently have over political discourse in 2017, but the numbers present are some solace that all hope is not lost.

Ten Fe arrive on the Lovell Stage looking like Stillwater, the fictional band at the heart of Cameron Crowe’s Almost Famous, and sounding like a remnant of the laddier end of the Britpop spectrum. Their tunes are immediate and catchy, their melodies simple enough to appeal to an afternoon crowd. What brings their set to another level is their excellent cover of ‘Born Slippy’, a straight guitar version of which has been bursting to happen for years. Josefin Ohrn & the Liberation bring an altogether different vibe, a pan-sensory assault from all seven corners of the band. They play as if they are racing each other to the finish line, all members conjuring a heady stream of sonic attack, which taken together is almost impossible to keep up with as a listener. Several members of the band, including Josefin herself, re-emerge later as part of Whyte Horses’ extraordinary communal show, which includes ten commedia dell’arte clowns sat along the front of the stage, and a band of anywhere between 11 and 18 all playing behind them. Badly Drawn Boy makes a surprise appearance too, although I suspect some may not even have noticed, such is the chaos on stage.

Arguably the best set of the weekend comes on the Sonic Stage from Anna Meredith. Her background in classical music runs headlong into her love for experimental and electronic forms, and what results is a cataclysmic collision of sound and style. Familiar tracks from her stellar Varmints album are peppered through the set, but it makes no difference – this music is obliterating and your very presence is enough for you to be unable to avoid its power. The eye contact communication between Meredith and her guitarist, tuba player, cellist and drummer is somehow enough to co-ordinate the madness, with time signatures that we mortals can’t even count to, and by the end, there is a slight tinge of shock on the faces of all in the tent. That was special.

The festival is rounded out by alt-J, the art school scoundrels whose recent third album, Relaxer, has split opinion. The consensus here, amongst what is by far the youngest Lovell Stage crowd of the weekend, is that the new stuff is great, though, and when they start with ‘3WW’ it is treated like an old friend. Frontman Joe Newman’s microphone appears to be disconnected for a moment, but they battle on bravely, and for the rest of their set never look back. The old songs, if a band as young as alt-J can have anything described as old, are the ones that fill the sky: ‘Tessellate’, ‘Matilda’ and ‘Something Great’ all word perfect. The mood drops for the achingly beautiful ‘Pleader’, but it is a rare moment of pause. By the time they finish with ‘Breezeblocks’, they have made this happiest of places a measure happier still.