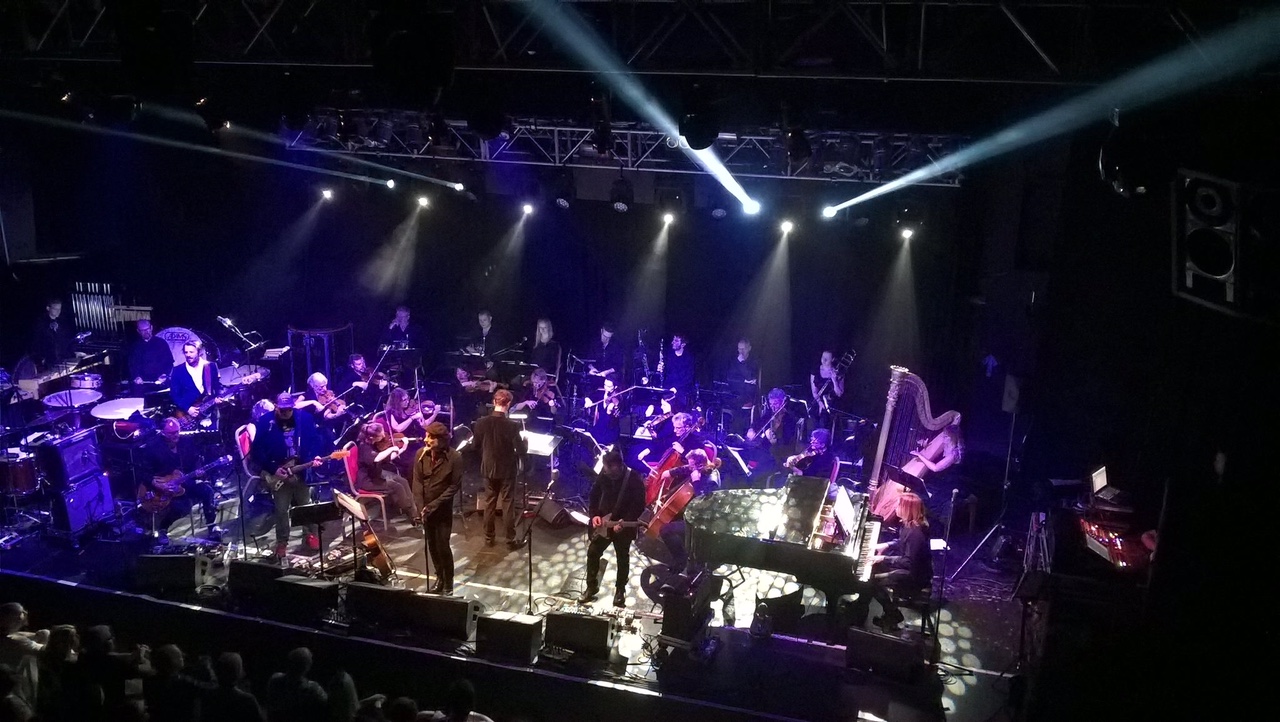 Ah, who better to celebrate Bella Union’s 20th anniversary than everyone’s favourite musical chameleons Mercury Rev? It’s unlikely you will hear many dissenting voices around these parts and the opportunity to take in a rare live performance in conjunction with the ever-splendid Royal Northern Sinfonia was so good we decided to send two writers, Andy Page and Francesca Baker, on consecutive nights, just for the sheer hell of it. Do they agree? Did they take different perspectives from the gig? Or are the band just woefully inconsistent? Read on…

A problem with the iconic Bristol Colston Hall’s ceiling meant that tonight’s Mercury Rev show, part of the 20th birthday celebrations of the excellent Bella Union label, had to be relocated across the road to the Bristol O2 Academy. However, the fact that the band are to be backed by The Royal Northern Sinfonia orchestra means something of a logistical victory for whoever managed to fit 32 musicians plus their considerable array of instruments (including a harp, kettle drums, grand piano, a glockenspiel and a xylophone) onto the Academy’s stage.

If anything, though, this only adds to the “all in this together” excitement of the prospect of seeing a band who have been creating mesmerizing masterpieces for nearly 30 years. A band who can no doubt make maximum use of an orchestra.

After Charlie Coxedge turns in a half-hour set of attractively meandering guitar soundscapes (like The Durutti Column with 2017 technology), it’s time for The Royal Northern Sinfonia to take the stage and play through a taster of Samuel Barber‘s ‘Adagio For Strings’, intertwined beautifully with a teasing section of Rev classic ‘The Dark Is Rising’ as the band, led by founder members Jonathan Donahue and Sean Mackowiak (AKA Grasshopper) and bolstered by former Cocteau Twin (and Bella Union label boss) Simon Raymonde on guitar.

The set proper then begins with the standout track from last years The Light In You, ‘Central Park East’, which allays any residual fears of the suitability of the venue for the show. It is simply spellbinding.

Donahue makes some introductions and thanks Raymonde for his efforts with Bella Union; putting out “bands like us” and having “the lion’s share of great albums for two decades”. It’s a sentiment echoed by the audience. Mercury Rev’s highly regarded Deserter’s Songs (1998) and All Is Dream (2001) are made for such an occasion and provide the backbone of a set that is also big on surprises: take, for instance, the appearance of the wonderful Holly Macve to provide gorgeous vocals for a cover of  Helen Shapiro‘s ‘I Wish I’d Never Loved You’, a 1964 song written by Raymonde’s late father Ivor, and performed after a moving dialogue from Donahue about the respected arranger, songwriter and actor. Or a run through Donahue’s old band The Flaming Lips‘ lesser-heard (and 30-year-old) ‘There You Are’.

Donahue is an animated performer with a real warmth who makes the observation that he is the only person on stage who can’t read or write music, and also that he feels compelled to turn to the orchestra and conduct them. “I didn’t realise that the stuff that the conductor does actually means something musically” he announces, self-deprecatingly.

Local hero Adrian Utley (of Portishead) is introduced to the audience’s delight for the version of Deserter’s Songs‘ astonishing opener ‘Holes’ and stays till the end. ‘Opus 40’ is a delight and when the orchestra appear to play the introduction to ‘When You Wish Upon A Star’…well, it is the introduction to ‘When You Wish Upon A Star’ which is then performed in full. It suits Donahue’s voice to a tee. He explains after the song “Yes, we went there. We always went there. When we were forming the band, we didn’t want a Sid Vicious-type bass player, we wanted an oboe!”

During the climactic closer ‘The Dark Is Rising’, returned to after the initial refrain at the start, Donahue gets his wish and ends the evening conducting The Royal Northern Sinfonia – with a light sabre. It was just that kind of evening. Sublime.

The Barbican Centre is a strange place for a gig. Set up more for concerts – there’s definitely a spectrum on which these two musical events sit; the middle-aged men wriggling in and out with their pints in plastic glasses seem slightly out of place. But the sound never is. Perfect acoustics as expected and technically brilliant, it’s the place for sonic brilliance. And so the perfect place for Bella Union to celebrate their twentieth birthday.

Poor Lowly. Always the backing, never the band, they play the role of support act well. The Danish five piece warm up the audience with their ambient tunes under a devilish glimmer of light. Led by Nanna Schannong and Soffie Viemose, who seems to be dressed in priestly garbs and has a penchant for lunging, their half hour set abruptly comes to an end as they are asked to leave the stage by tech assistants. There’s a fair bit of setting up to do before the main event, you see. “We are Lowly. In case you thought we were Mercury Rev,” Soffie reminds us.

There’s no danger of confusing the two. Mercury Rev have with them an entire orchestra, after all. As the Royal Northern Sinfonia, conducted by Hugh Brunt, raise their instruments Jesse Chandler sneaks on stage, head down, aiming straight for his piano. Sean Mackowiak swaggers onto his position of electric guitar. Bastien Juel (bass) and Jason Miranda (percussion) take their places, whilst singer Jonathan Donahue comes on with an almost perfumed glide. Guest of the night is Simon Raymonde, the man behind the label.

Announcing their arrival with ‘Central Park’, the band work through songs from their early days to their 2015 album The Light In You, their first on Bella Union. Despite joking about their ever-changing line up when introducing ‘Raise The Tide,’ taken from 1995’s See You on the Other Side, their first after David Baker’s departure, there’s a sense of confidence and poise to the guys. There’s a dip into history as Holly Macve sings on ‘I Wish I Never Loved You’, a song that shot to fame when sung by Dusty Springfield and Helen Shapiro, and that was arranged by Simon’s father Ivor Raymonde. ‘Opus 40’ is the only single to be played, its five minutes extended out with a glorious shimmer. ‘There You Are’ sees the orchestra take a rest, and the six members play on. ‘Tonite It Shows’ was recorded with strings on the 1998 breakthrough album Deserter’s Songs, and the Disney style melodies were made for such a gig. The softness and richness of Christmas songs can be felt in its tinkling magic that is never overpowered by the orchestra.

Jonathan Donahue is an intriguing frontman. He balances on one leg and sways with  effeminate arm gestures. Appearing to hold the music in him, he quivers like the strings timbre, caressing the mic stand. Like “Gandalf on acid” he moves his limbs as musical gestures, part of the orchestral flushes.

Described by Donahue as a chance for the band to share “some of the more delicate, fragile, moments” there is a fairytale and wholesome like quality to proceedings. Dreamlike melodies and flickering arpeggios are not swallowed up by the orchestra, but become richer and fuller. New recruits to the Mercury Rev sound would never know that this was not the way it had always been. By the time the metaphorical curtain falls and final tune ‘A Drop In Time’ is played, there’s a cosmic swirl in the air. Sure, it’s not your usual rock’n’roll birthday party, but it feels a fitting and elegant one for Bella Union.