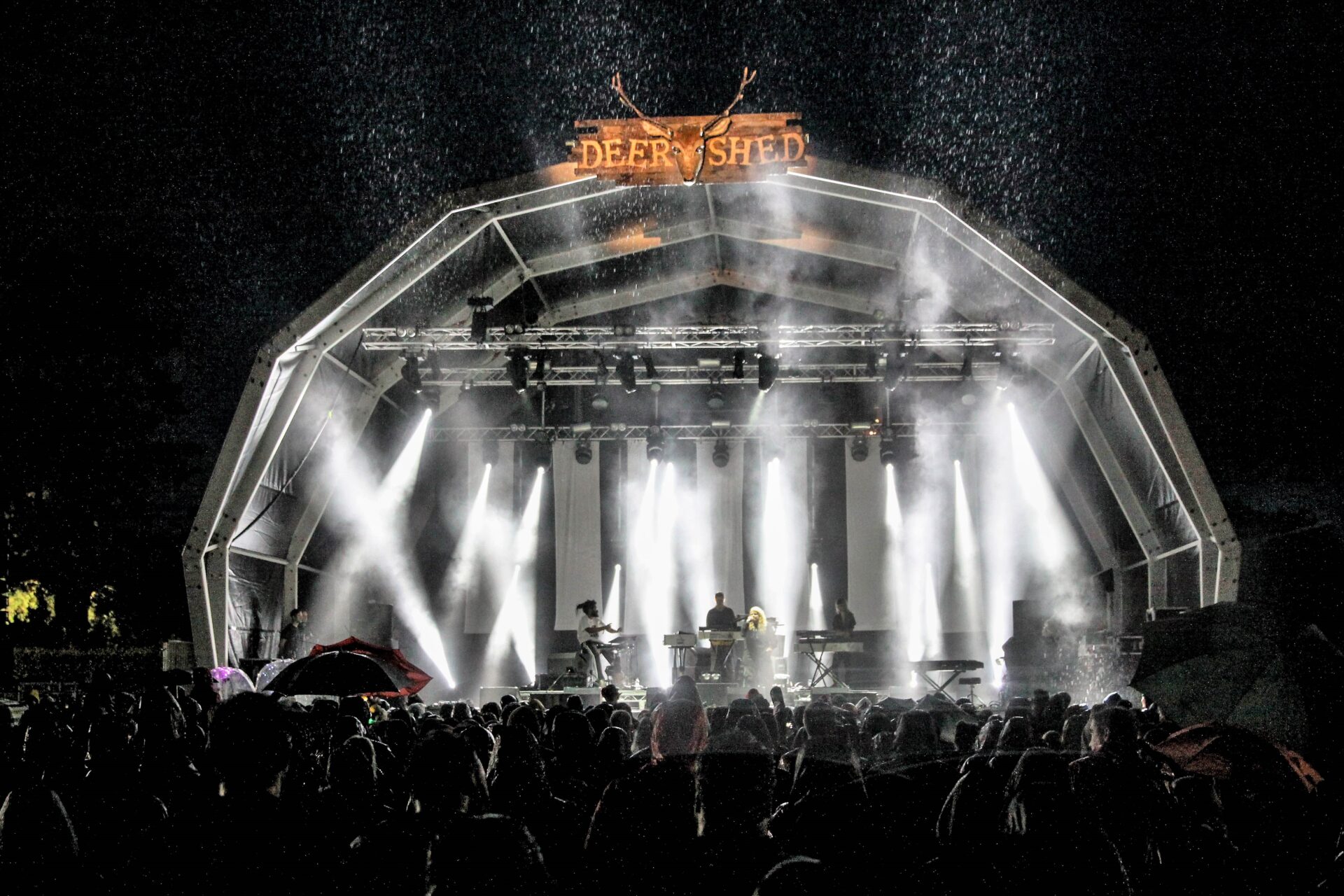 Even when it rains, the sun always shines on Deer Shed. Despite having to face severely inclement weather for the first time in its eight-year history – there are significant downpours on both Friday and Saturday night – the true spirit of Deer Shed Festival remains firmly intact. It is warm, welcoming and continues to dazzle with its bright array of musical talent, arts and science events for the entire family.

Deer Shed has expanded this year, with its now 11,000 capacity having been reached a good few weeks beforehand. The emphasis still remains firmly on children – a staggering 46% of those present over the weekend are aged 16 years or under – and they are very well catered for. There are workshops, many of which are built, quite literally, around this year’s central theme, the Wilderwild. Occupying a previously untouched area on the edge of the traditional festival site, this weekend the Wilderwild is home to a range of captivating pursuits from den building to tree climbing and barefoot walking.

The more familiar arts and crafts workshops all remain though, as does the consistently popular science tent, sports field and, most reassuringly, that perennial family favourite swingball. There are also a staggering variety of shows, performance, and theatrical events crammed into the weekend – including magicians, comedians, storytellers – catering for people of every age and ability. It is impossible to capture everything so God Is In The TV chooses to concentrate on its primary cultural bent, music.

Tom Williams gets Deer Shed’s eighth birthday party off to a rousing start at 4pm on Friday on the dot. At Deer Shed everything runs on time; detailed planning and timely execution being absolutely key to its continuing success. Williams punctures a big hole in the late afternoon gloom with an uplifting set featuring material from his recently released album All Change. One of many artists who is making a welcome return trip to Baldersby Park – he was last here five years ago – he recognises how much the festival has grown in the interim. “It is still very beautiful, though,” he says and he will brook no argument there.

Following him onto the main stage are Happyness. Given they are to also play the next morning In The Dock stage – plugging a gap created by the last minute withdrawal of Goat Girl – they are clearly the hardest working men at Deer Shed this year.  Bags of energy is but one of Happyness’s many attributes. They also possess invention, guile, a Pere Ubu T-shirt (now worn by drummer Ash, it was last seen on guitarist’s Benji’s back at The Fulford Arms earlier on this year) and a stack of top tunes.

In keeping with one of Deer Shed’s grand traditions, Honeybood will be this year’s first of what will turn out to be many Scots acts to make yet another powerful cross-border raid. To announce their arrival, the sun decides to come out. And it fits the mood perfectly as the exciting Glaswegian duo of Stina Tweeddale and Cat Myers continue to go from strength to strength.

H. Hawkline, unfortunately, clash with Cabbage. With charming self-deprecation Huw Evans – the man whose solo project the Welsh collective H. Hawkline is – remarks that if he had been given the choice he would have opted for the Mancunian five-piece anyway. It’s a tough call. Cabbage are a great big ball of untrammelled fire; H Hawkline possess a more reflective, almost child-like allure. Despite such marked differences, it is difficult to put a cigarette paper between them.

In between times York’s The Howl & The Hum make the Obelisk stage their very own and confirm why there is such a loud clamour surrounding them right now. In Sam Griffiths, they have a front man with huge charisma and a voice to die for, the two central characteristics of a lead singer that can often be strangely disconnected. Their signature song ‘Godmanchester Chinese Bridge’ is a suitably powerful statement of artistic intent.

Bellshill’s finest, Teenage Fanclub limber up for their Friday night headlining slot with a bit of John Shuttleworth in the Big Top. Graham Fellows has threatened to ditch his long-running comedic organist for years now, but thankfully the man in the red roll-neck sweater and brown leather jacket is still going strong. Quite what a bunch of nine-year-olds make of his references to Vince Hill, Pam Ayers, Donny McLeod, Justin Hayward and the virtues of a Y-reg Austin Ambassador is anyone’s guess. And then off he goes to grab that burger at Wetherby Services on his way back to Sheffield. It really is comedy gold.

The Fannies are the perfect fit for Deer Shed. They exude sunshine, sweetness, and a warm reassurance in their familiar take on melodic guitar-pop. By the time they get to ‘Can’t Feel My Soul’, they are in cruise control, their beautiful sun-kissed harmonies brightening up even this darkest of nights.

After the torrential rain of the previous night, Taunton’s October Drift are a breath of very fresh air. They enhance what is already a growing live reputation with a blistering set that is as animated as it is brutal. The fact that it is only half eleven in the morning makes you wonder what they must be like after midnight.

The rest of the day – give or take an Ibibio Sound Machine or Kate Tempest or two – belongs to Scotland. Originally hailing from Irvine in North Ayrshire, the Idlewild frontman Roddy Woomble distills an intoxicating essence of ambiguity, surrealism and grace into his songs. The end product – reflected on recent single ‘Like Caruso’ from his forthcoming fourth solo album – is mesmerising.

Fellow countryman Kenny Anderson is here as King Creosote. Backed by a seven-piece band featuring an accordion, fiddle, cello and for the last couple of songs bagpipes, Anderson relocates a national and musical past in his present. It is a modern celebration of all that folk music has to offer, something that a euphoric ‘Surface’ captures to perfection.

After something like a ten-year hiatus, singer Aidan Moffat and guitarist Malcolm Middleton decided to reconvene last year to celebrate Arab Strap’s 20th anniversary. Given the bleak nature of Moffat’s lyrics – often dealing with deeply personal issues of drunkenness, desperation, aborted desire and dysfunctional human relationships – they may seem an unlikely fit for a family-friendly festival like this, but it works. Entering to the swirl of the pipes and leaving an hour later by way of a quite magnificent re-evaluation of ‘The First Big Weekend’, Arab Strap remind us of just exactly why they have achieved cult status.

In between this spectacular Scots’ triumvirate, Ibibio Sound Machine return to Deer Shed for the third time in almost as many years. Their repeat booking makes perfect sense. Led by the infectious energy and vitality of British-Nigerian vocalist Eno Williams, the eight-piece band create an intoxicating internationalist sound that fuses together afrobeat, jazz, techno, funk and dance.

The choice of Kate Tempest to close out Saturday night on the main stage is proof positive of Deer Shed’s desire to expand the limits of its musical and cultural horizons. The erstwhile rapper is constantly evolving, now seizing the mantles of performance poetry, political insight, pop and hip-hop and blurring the boundaries between each of these idioms until any such distinction neither matters nor exists. It is breathless, meaningful, and truly invigorating. It makes no never mind that it is now raining cats and dogs.

Sunday always has been, and despite the more recent addition of an “auxiliary” evening at the festival, you suspect always will be Deer Shed’s long goodbye. It is the perfect opportunity to nestle in the Obelisk tent and avail oneself of a series of literature and spoken word events, the personal highlight of which was to spend 90 minutes in the company of Woody Woodmansey and Ken Scott. As a member of David Bowie’s legendary band The Spiders From Mars, Woodmansey played drums on what surely are four of the greatest albums of all time: The Man Who Sold The World, Hunky Dory, The Rise And Fall Of Ziggy Stardust And The Spiders From Mars and Aladdin Sane. Scott’s career as a recording engineer and producer has seen him work with The Beatles, Elton John, Pink Floyd, and David Bowie (on all of the above albums).

Interviewed by Dave Simpson of The Guardian, the two men take us back to those earlier times in a vastly entertaining and illuminating journey through the past. It is one where we learn about the origin of the telephone ringing on the fade out to ‘Life On Mars’ (it was a wrong number, apparently, received on the public pay phone beside the kitchen at Trident recording studios); how 95% of Bowie’s vocals on those albums were ‘first takes’ and how Woodmansey laid down “a hopeless kind of beat,” on the song ‘Five Years’  because “we’ll all be dead by then.”

It is then left to Neil Hannon and The Divine Comedy to bid us a fond farewell from Deer Shed Festival 2017. Two songs in, ‘Napoleon Complex’ goes some way to explain why Hannon is dressed in the breeches and cocked hat of the military general and first emperor of France.  By the time of ‘The Complete Banker’ he is decked out in a sombre suit, bowler hat and, quite fittingly given the prevailing conditions, brolly. The costume changes are merely part of what is a gloriously theatrical occasion and a most fitting finale to yet another hugely successful Deer Shed Festival.

With its increased capacity some Deer Shed purists may argue that it has just become too big. Longer queues to get in (partially caused by the heightened security checks necessitated by the troubled times in which we now live), as well as further waiting at the food stalls and the toilets, are all an inevitable consequence of the greater footfall across the site. But these increased numbers surely have to be offset against the financial considerations of running an event such as this. Where else would you get a three-day festival that takes place in such a splendid, safe and relaxing environment; one that uniformly caters for people of all ages and continues to expand and develop the quality of acts that it attracts year after year, whilst, come rain hail or shine, still managing to retain its innate sense of warmth, intimacy, and collective responsibility?

Deer Shed Festival 8 was held between the 21st and 23rd of July 2017 at Baldersby Park, Topcliffe, North Yorkshire.

More photos from Deer Shed Festival 8 can be found HERE