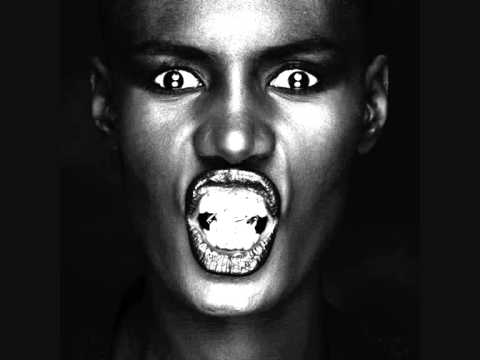 During a Skype call with my parents in 2012, they told me they’d just witnessed Grace Jones on TV performing at the Queen’s Diamond Jubilee. Knowing that I’m a massive Grace Jones fan, they mentioned she was one of the highlights as she’d impressively hula hooped her way through the entire song. Neither of my parents could name the song she did when I asked them which one she’d performed. This came not long after a good friend of mine had seen her receive a lukewarm reaction when she supported Pulp in London.

Jones is arguably one of the most recognisable celebrities there’s ever been. Thanks to her ambiguous look and her huge personality, she’s been a regular on TV for decades. Despite a career in music that started 40 years ago, her musical achievements often come second to Grace Jones the person/celebrity. It wasn’t always this way.

After Jones’ first three disco albums failed to catch on in the late 70s she changed direction and briefly got the critical acclaim she deserved. Her brilliant 1980 album, Warm Leatherette was the first of the three releases recorded at the Compass Point studios in the Bahamas. It caught the attention of the music press with its inspired choice of covers and truly unique sound. She released Nightclubbing the following year as the second in the Compass Point trilogy. It’s quite rightly regarded as her masterpiece. The reggae meets new wave pairing was fresh and thrilling in eclectic time for pop music. The NME crowned it their album of the year ahead of some strong competition (Dare, Computer World and Penthouse & Pavement).

Along with her seductive reading of Private Life by Pretenders and the Trevor Horn-produced masterclass, ‘Slave To The Rhythm’ (the song she had performed whilst hula hooping), ‘Pull Up To The Bumper’ is one of just three times Jones made the UK top 20. It’s the most effective summation of her fierce and playful personality put into song. 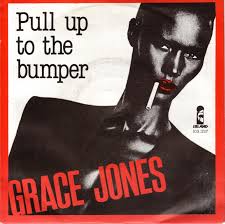 ‘Pull Up To The Bumper’ is driven by a funky bassline and a percussion so tight it would fit on Remain In Light by Talking Heads thanks to the genius rhythm section provided by Sly and Robbie. The infectious guitar lick and vibrant synths make it a perfect soundtrack for the same New York nightclubs where Jones found her calling. The impeccable production and sharp playing give the song a feeling that’s accessible as it is intimidating.

As with most of her material, Jones dominates the show. In the verses she delivers the lyrics in her trademark ice cold monotone voice. A demanding call and response styled chorus appears that’s full of innuendo, “pull up to my bumper babe, in your long black limousine, just pull up to my bumper baby and drive it in between”. Jones has said the song’s subject matter isn’t necessarily sexual, but it’s hard to shake that feeling as she later asks, “back it, up twice, now that fits nice” and “race it straighten it, let me lubricate”. Just like Prince’s ‘Little Red Corvette’ it’s obvious explicit nature somehow passed by the same people at Radio 1 who later banned ‘Relax’.

The effortless fusion of styles, irresistible groove and catchy lyrics made ‘Pull Up To The Bumper’ way ahead of its time (much like Jones herself). Hearing it now, it sounds just as vital as it ever has. It’s one of many triumphs throughout Jones’ underrated and consistent musical career. Jones definitely deserves more credit as singer, performer and songwriter than just being one of those faces who’s guaranteed to give good interview on the Graham Norton show every so often.