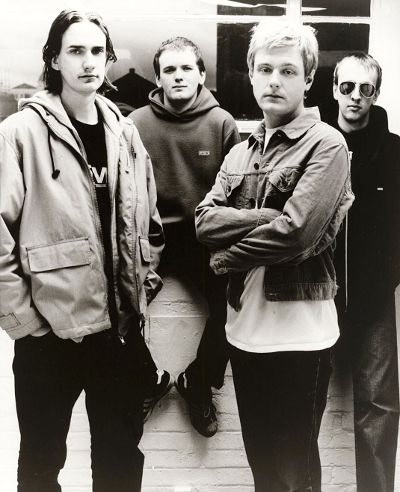 It hurts, you know? It’s been well over a decade since I last saw John, and even though most of us were already aware that he was terminally ill, the truth is, he touched so many of our lives, always for the better, that anybody who ever met the guy would struggle to find a better word to describe him than “unforgettable”. The passing of time since our last contact is irrelevant. It still hurts. This is by far the hardest thing I’ve ever had to write.

The drummer in my own first “proper” band, Life Blood – i.e. one that actually performed on stage a couple of times – it was always painstakingly obvious, even in those high school years, that out of all my friends, John (or Johnny) Machin was destined to be the one most likely to succeed in the music business. And succeed he most certainly did, achieving two Top 40 hits (‘Vision Incision‘ #30, and ‘Battleflag‘ #36) as well as a Top 20 album, How To Operate With A Blown Mind #15, with the formidable Lo Fidelity Allstars.

Every other drummer I knew was in awe of his remarkable skills, and you’d be hard pushed to encounter anybody who wouldn’t have used the words “lovely guy” and “hilarious” with respect to him – we all have a Johnny story to tell somewhere along the way!

I remember, in those formative school years, going round his folks’ house for rehearsals, where, while everybody else was listening to the likes of, say, Duran Duran or The Smiths or whoever, his record collection was always full of jazz albums (I remember George Melly being a particular favourite). This rather typifies John as I remember him, as he was always a leader rather than a follower, only ever going by his own instincts, and as a result he stood out from the crowd like the brightest shinng beacon. Not only this, but he had us all rolling on the floor with his razor sharp wit.

My lifelong friend, the animator/author Jason Guest, perhaps sums up best what John was like growing up, with the following story: “My abiding memory of John is a satirical school assembly in which, dressed in glasses and an ill-fitting Tweed jacket, he took on the role of our dour history teacher Mr Roberts. Roberts was Welsh and his catchphrase, “I’ll come down on you like a tonne of bricks, boyo!”, was commonly heard during his boring lessons. John delivered this line, on stage, in a Welsh accent, from the top of a vaulting horse, before flinging himself bodily into a pile of crash-mats. The entire audience, including the headmaster Mr Armitage, burst into laughter and Mr Roberts stormed out. The next day Armitage took assembly and the theme was the danger of taking a joke too far! No doubt there were a few red faces amongst the teaching staff that morning!”

Even the more ‘wicked’ side of his sense of humour is impossible not to remember fondly. I recall an occasion where we were rehearsing a cover version of The Beatles‘ classic ‘Lady Madonna‘. This was 1986, just after the World Cup, and I decided to sneakily change the lyrics of one verse so it changed from Lady Madonna to a moan about Diego Maradona. John’s reaction to this was to leap from his drum stool and attack me with his sticks while I cowered on the swivel chair nearby. He later admitted to me that he had no idea I’d changed the words and didn’t care; he simply “wanted to surprise me!” – again, that was John all over. He could get away with pretty much anything, and could turn the sourest atmosphere into the greatest of parties with just one quip.

Last time I saw John in the flesh, back in the noughties, he was complaining about the nineteen year old groupies who would hang around backstage “they’re all too young and giggly and I’ve got nothing in common with them. I’d honestly rather just be down the pub with my mates.” And anyone who knew him would know how true that statement was. Unlike many rock stars, he was never going to abuse his band’s success in order to claim anything as crass as ‘notches on bedposts’ or anything like that – he was far too much of a gent to even consider it.

Another friend and former bandmate, David Mounfield (Count Arthur Strong’s Radio Show, This Is Jinsy, The Ornate Johnsons) visited him more recently and said “I am gutted. I saw him in the autumn and he seemed to be doing really well. He was as uncompromising and funny about his illness as he was about everything else.”

As your sister Louise says, you were “one in a million”. So goodnight and sleep well then, Johnny Machin. Even though I know that you would have slaughtered me, no doubt brilliantly, for penning this tribute in the first place…

14 thoughts on “Tribute To A Friend – John Machin, AKA Slammin’ Johnny Animal from Lo Fidelity Allstars”