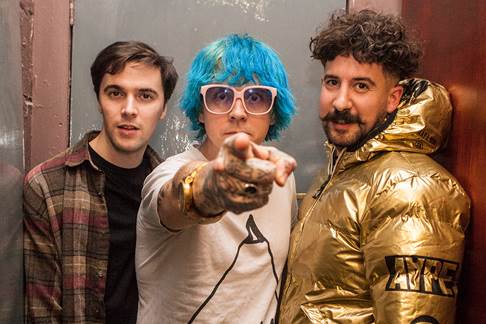 The slick, sharp guitar intro to opening number ‘KO’ gets Dancehall‘s ten track album The Band off to a strong start and things continue to remain positive with the arrival of debut single ‘V’s & G’s, which comes across very much as a sort of tribute to some of their musical influences such as Sonic Youth.

The 90’s punk-style vibe to both ‘Digging’ and ‘Droners’ will impress anyone who is a fan of the genre, although the rather melancholy deliveries – most notably the rather morose and ‘hollow’ vocals from front-man and bass player Timothy V – might make both tracks a little too sombre to play on repeat.

Latest single ‘Virgin’, rather poignantly released at a time when women everywhere are continuing to stand and speak up sexual harassment, is a fantastic anti-bad masculinity number – an anthem of sorts – that holds a deeply important message: “It’s OK to be a virgin, it’s OK to be uncertain.”

The best part of ’96’ is undoubtedly the guitar riff which may yet have musician fans everywhere, regardless of whether they can play the instrument or not, air guitaring along to. ‘Salt’ meanwhile would work well – and should ideally be chosen – as the band’s next single, and the album perhaps would have been better to end there, but instead, it closes out with ‘Vitamins’, another punk-like track which has a toe-tapping foot stamping rhythm; it’s not a bad end by any means, but it could have been stronger.

For a debut album by a group who have only been together two years, The Band is strong introduction to a Dancehall, a trio whose work ethic and passion for what they do is openly displayed through their music and this collection is certainly a great starting point for them as they try to make their way in the ever-competitive music industry.

The Band is out now on Vibe/Anti-Vibe.