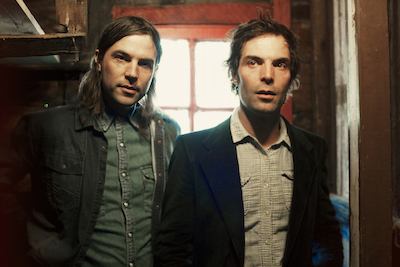 A live video this time from a band that has impressed me though I’ve never got around to seeing them. This performance enhances my desire to do just that.

The Barr Brothers are two American siblings, Andrew and (songwriter) Brad Barr, from Rhode Island, who founded the band in Montréal in 2005. I wonder how many other ‘American’ bands formed in that city, which is to music what Rome is to Christianity?  The third member was harpist and percussionist Sarah Pagé, who just happened to live in the apartment next door. She left the band earlier this year to do her own thing.

Their third album, Queens of the Breakers,  was released in October 2017. This song, ‘Defibrillation’, was the opener on it. QotB has been long-listed for Canada’s Polaris Music Prize.

Perhaps it’s something in the landscape of New England but there are numerous bands from that sophisticated north-eastern corner of the U.S. producing cultured, thoughtful music like this. Arc Iris, from the very same city, Providence, is one that immediately comes to mind, along with Jocie Adams’ previous band, The Low Anthem. Musically, it’s about as far away from Los Angeles and Seattle as you can get (with the notable exception of Fleet Foxes of course).

This video was shot in London’s urbane Union Chapel venue earlier this year when The Barr Brothers were performing a headline show.