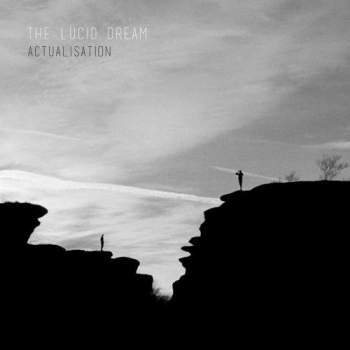 Carlisle quartet, The Lucid Dream, return with their fourth album, released on 19th October 2018. It contains only seven tracks (although that is debatable, more on that to come), but it is just over 44 minutes in length. It varies in style, but not era. This wouldn’t be out of place in the early 1990s, and I’m guessing that’s where the band draw their influences from.

It starts off strongly with the opening track ‘Alone In Fear‘, which is just begging to be played loudly. Think Underworld and Primal Scream  at their best. Complete with a driving and repetitive bassline to it, this track stands out, and at almost 9 ½ minutes, you certainly get your money’s worth out it.

The second and third tracks, ‘Zenith (part 1)‘ and ‘Zenith (part 2)‘, are essentially the same song broken into two parts. First, is an instrumental track, or a long intro in realistic terms, with ‘…Part 2‘ having lyrics. Stylistically, it differs from the opener, being more reminiscent of Happy Mondays, if anything.

‘SX1000‘ sees a return to a more electronic style. Again, this has a repetitive hook to it, and whilst it is good, there isn’t the drive and the feel of the opening track. It feels like there is something missing, but I cannot put my finger on what it is.

The fifth track, ‘Breakdown‘ brings things back up again, certainly musically. It is a darker and edgier track, that is sadly let down a little by Mark Emmerson’s vocals, which don’t seem to fit in. It’s only a slight criticism, and perhaps unjustified, however, it was something I found a bit disappointing, especially when musically, I really loved it.

The penultimate track on the album, ‘Ardency’ could, in all honesty, lose the first 2 ½ minutes or so. The intro doesn’t really fit in with the remaining 6 or 7 minutes, which is very Madchester in terms of how it sounds. The remainder of the track also needs to be played loud, and wouldn’t be amiss when closing a live set, but that slow start does kind of bring it down.

Finally, ‘No Sunlight Dub‘, which is also the new single, completes the album. As the song title suggests, it has a dub beat. It’s not true dub style, and again, takes a while to get going. The track starts slowly, and the harmonica sounds too much like Gorillaz ‘Clint Eastwood‘ for me. It winds up, and improves, but again, another potentially great track is let down by the introduction.

Overall, it is a good album, and one that will be played again. There are some lesser points, as noted above, but the strength is in the music itself. There are a couple of contenders for the album opener, (‘Alone In Fear‘ and ‘Zenith…‘ could easily do the job). It’s a shame that the overall feeling has been let down by some weak intros. The Lucid Dream also have some live dates coming up in November 2018, and February 2019, having recently supported Wooden Shjips.