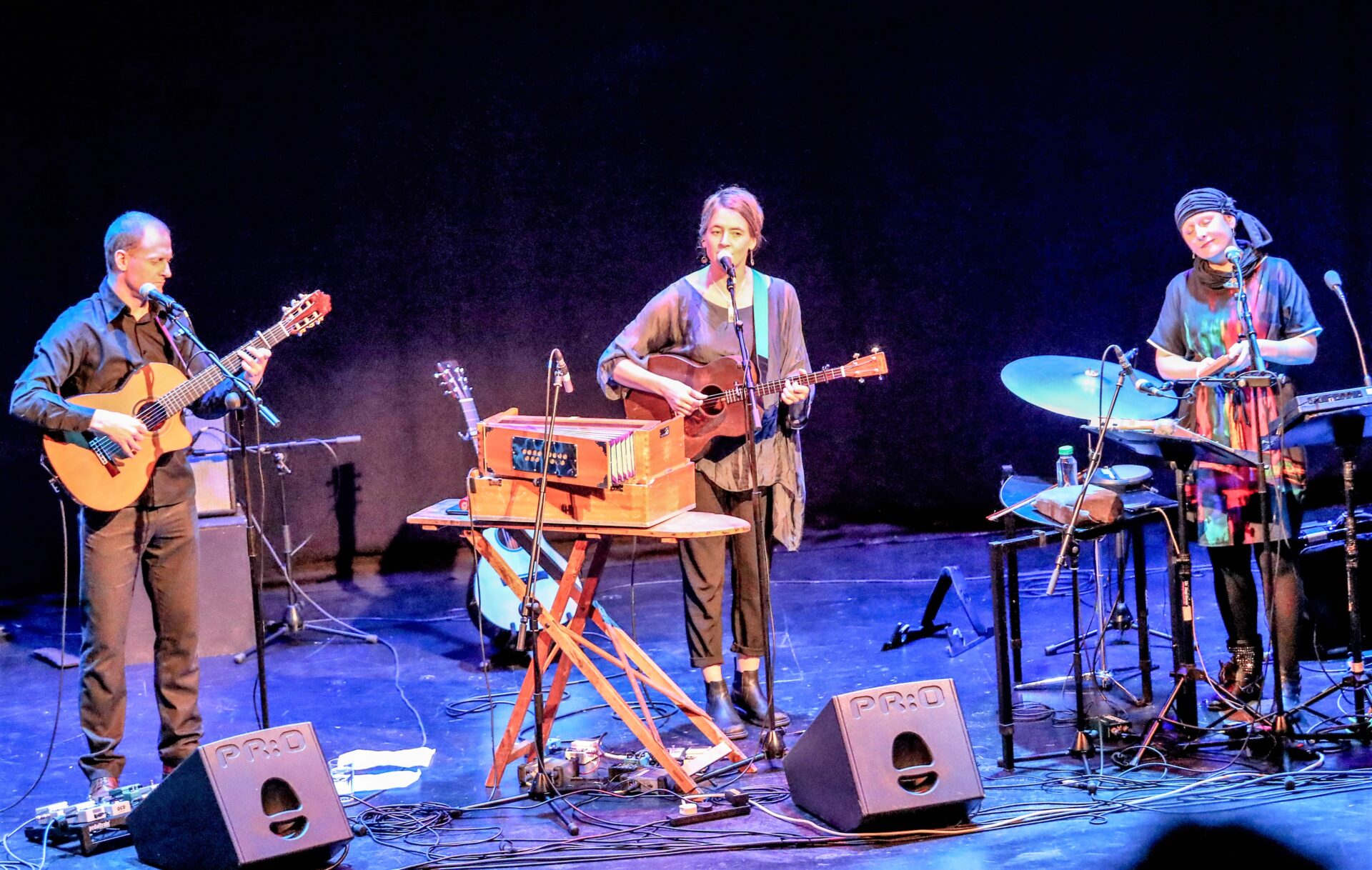 Karine Polwart is a storyteller. Amongst her many other considerable talents as a theatre-maker, essayist and published writer, the multi-award-winning musician and composer from the wee village of Pathhead in Midlothian writes songs. She sings and plays guitar too. And on stage, she also gently squeezes a Shruti box (a bellows-blown instrument which originates from India). In between these songs the current holder of the BBC Radio 2 Folk Singer of The Year Award laughs and jokes a lot, exuding much happiness and well-being along the way. But perhaps above and beyond all of this, Karine Polwart tells stories.

For two enchanting hours this evening, the wonderful tales that Karine Polwart tells arrive carefully weaved into the warm and colourful fabric of her atmospheric music. And this music comes courtesy of her established trio. Playing alongside Karine Polwart is her brother Steven Polwart (guitars) and Pathhead near-neighbour Inge Thomson (accordion, percussion), both of whom are her long-standing collaborators.

Karine Polwart’s observations on human life and behaviour and the natural world that surrounds her are captured in vivid, insightful, dramatic and occasionally dark lyrical imagery. Her narratives do speak of great personal optimism and her firm belief in humanity, but they are equally alive to many of life’s less palatable experiences with which she is faced on a regular basis.

This last point is illustrated perfectly on her opening brace of songs, both of which have America’s 45th and current Commander-In-Chief firmly in her artistic crosshairs. Looking at Donald Trump from the perspective of an ancient piece of Isle of Lewis rock (the Outer Hebridean island from where Trump’s mother first came), Karine Polwart initially takes aim at him on ‘I Burn But I Am Not Consumed’, one of several songs performed here tonight that are drawn from her recently released and critically acclaimed album Laws of Motion. This, in turn, metamorphoses into her earlier song ‘Cover Your Eyes’ where she rightly takes issue with a younger Donald Trump when he opened his controversial golf course on the Menie estate in Aberdeenshire wreaking havoc amongst local families and the area’s specially protected nature site in the process. 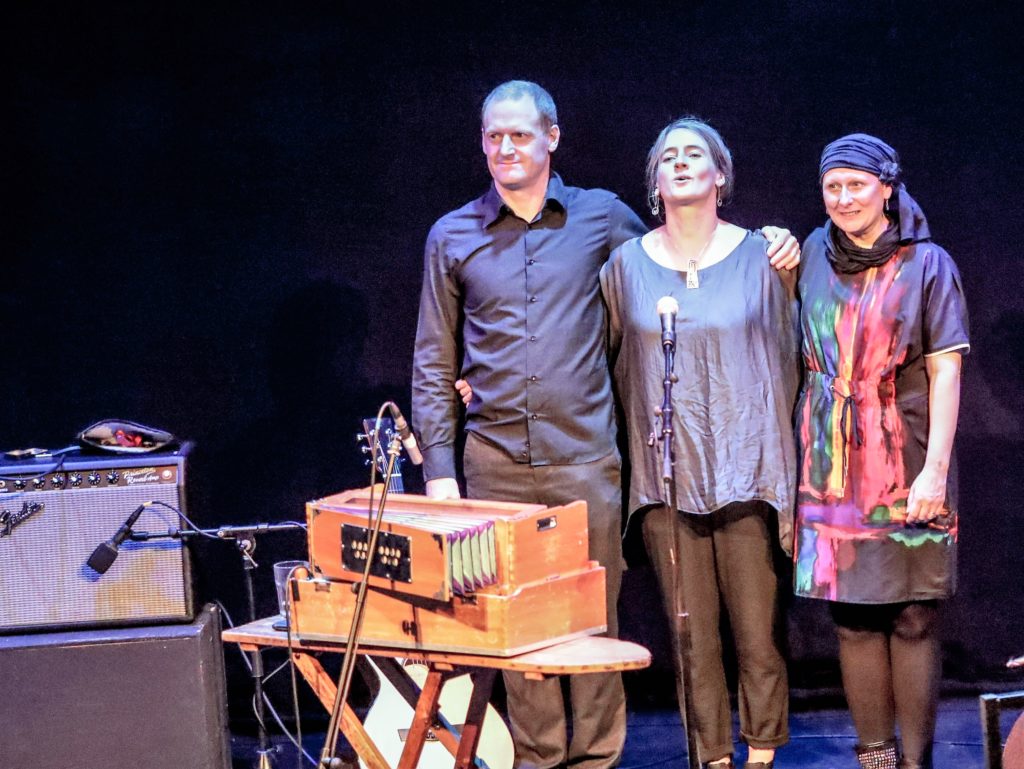 Family is clearly a very strong and significant part of Karine Polwart’s life. ‘Rivers Run’ about her son Arlo and the ensuing ‘Young Man on a Mountain’ in memory of her grandfather, a taciturn man who had been stationed in Northern Italy during the Second World War, confirm her deep love for her family. Something else that is very close to Karine Polwart’s heart is nature. On ‘Cornerstone’, a song about the Isle of May in the outer Firth of Forth, you can almost taste the sea air and hear the cries of the nesting guillemots such is the deep sensory impact of her words.

Demonstrating both her widescreen vision and acute sense of humour, on ‘Wind Resistance’ – a theatrical show first produced by Karine Polwart for the Edinburgh International Festival more than two years ago – she reflects upon various subjects including the history of maternity care, Scottish football and pink-footed geese. And then in the second half of the show with ‘Tinsel Show’, she sees Grangemouth through the eyes of a child, imagining this grim industrial landscape as some twinkling magical kingdom. Having had first-hand experience of the town’s petrochemical complex belching its fire, smoke and detritus into the night-time sky   – in 1972 at the Grangemouth Festival, an event somewhat improbably produced by the English film actor Stanley Baker and where Polwart’s fellow Scot and kindred storyteller Billy Connolly propped up the bill and Beck, Bogert and Appice headlined – her ability to creatively suspend such disbelief is really quite astonishing.

The last song of the set is ‘King of Birds’ in which Karine Polwart returns to one of her more familiar themes, that of the “power of small things”. She had earlier touched upon this concept on ‘Cornerstone’, where she explored the idea of the Isle of May’s former lighthouse keepers and contemporary scientists looking after something much bigger than themselves. On ‘King of Birds’ the wren assumes this position within the wider context of The Great Fire of London, yet this tiny bird and its fierce symbolism of hope equally reflects the positivity and desire that courses right through Karine Polwart and her inspirational words and music.