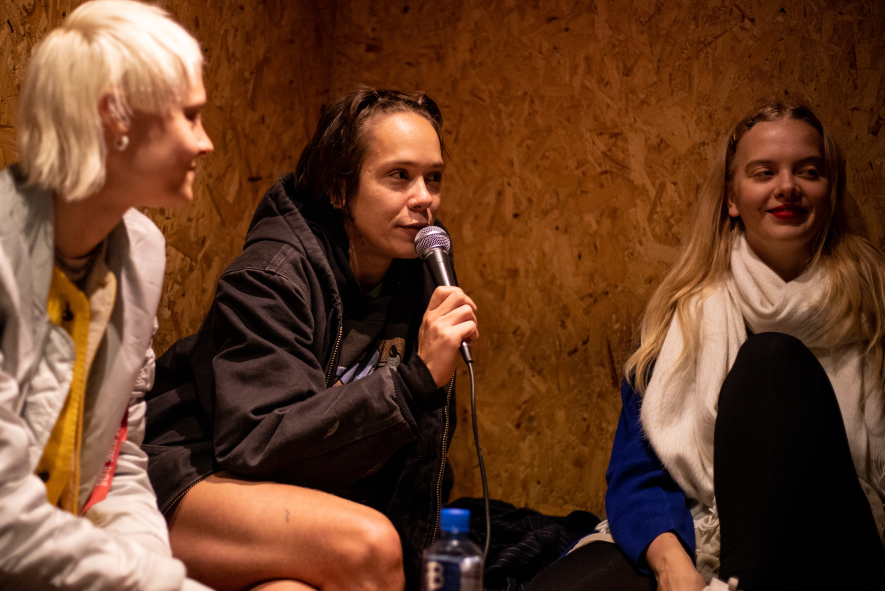 Prior to playing an incendiary and raucous set at Cardiff’s Swn Festival in Cardiff a few weeks ago, Alisha Gough caught up with the trio Dream Wife who are our Neutron album of the year prize winners for their self titled long player released at the start of the year.

Since forming in 2015 as a college art school project, Dream Wife – a name chosen as commentary on society’s objectification of women – have made the fictional a reality. Rakel Mjöll (lead vocals), Alice Go (guitar and vocals) and Bella Podpadec (bass and vocals) came together while they were studying at Brighton University, initially intended as a performance art piece and a way for the trio to obtain a dream trip to Canada. They quickly realized that their chemistry was too powerful for them just to be a one-time thing, so they took themselves out on the road under their own steam, and started touring with only four songs and without a booking agent, promoter or a tour manager. Fast forward to 2018, Dream Wife have released their debut album crammed with infectious guitar hooks, pretty melodies are smeared with deceptively sweet melodies that are twisted with punky attutude, frenetic energy and self empowering messages, Dream Wife are the vital guitar band of 2018.

The first question that came to me, a lot of my old friends in the music industry have been following you quite closely and what you’ve been doing, so my question is: does Dream Wife now match the idea you first had for the band when you started?

Alice:I feel like we’re getting to live out a lot of dreams that we didn’t really understand were part of it before but feel intrinsically linked somehow.

Alice: We played summer sonic festival in Japan and that was a dream come true for all of us, none of us had been before and I think we’d all been waiting a really long time to go and it felt really special that we got to go together.

How are the fans there? What was it like to interact with the people?

Alice: I think people there watch and listen to you in a really different way that I don’t think we’ve seen before, it was like kind of much more respectful, the way they listened to you. In Tokyo it felt very still but very present in terms of how the crowd were, but in Osaka there was this vibe where people were moving and engaging in a much more physical way and singing along a lot more but yeah Tokyo, we’ve never seen a crowd act that way so it was really special.

So that was the festival, when you go on tour though I heard you put out an open call for either all female or non-binary support bands: how did this idea come about and what was the message you put out to bands?

Bella: We talk a lot about supporting women and non-binary people in music, it felt like with this tour we wanted to use it as an opportunity to actually put these kind of verbal messages we’ve been putting out into actually practical actions, and to really connect with the people that actually want to play with us. So it was just an open call through social media, promoters and Girl’s Rock; we worked a lot in alliance with them, and in the first week we got 430 submissions from incredible bands which was obviously a very tall task to work our way through them but there was so much amazing talent and so far in America and the shows in Ireland it’s been a real highlight of this tour getting to meet these bands and have conversations with them about their local music scene and yeah. 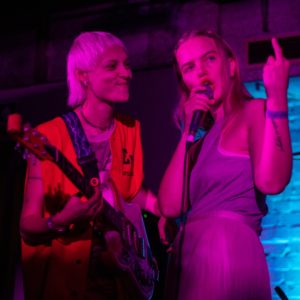 That is an amazing idea! Going along that train of thought I was thinking about the song ‘Somebody‘ and wondering if that was somewhat inspired or driven by the #METOO movement?

Rakel: I guess in a way, but we wrote that song a few months prior, there was another movement going along for a while that was similar called the slut walk, I’m from Reykjavik and these two [Alice and Bella] have often visited and we all have a lot of friends there and they were, before the slut walk happened. The slut walk is a public march that started in Toronto and it was created because of an outroar of a court ruling where an official said that if a woman, the victim, hadn’t been dressed the way she had been dressed that she wouldn’t have gotten raped. This idea of getting raped as if you’re getting the flu and putting the blame on the victim, and how also the justice system treats these cases of assault and rape, it just created this huge furore, so every year in different cities around the world, they march, and our friends in Reykjavik started posting stories of their assaults and rape cases. But also what happened afterwards in the justice system and how community had failed them and that’s really important. So we were reading these stories online that were posted prior to that walk, and we went into our rehearsal space and we were talking about it, how incredible it was, but also heartbreaking. But also this kind of idea of unity being formed online and in community, so yeah that’s when we wrote ‘Somebody‘. And it was written in one go.


That makes a lot of sense yeah, hopefully not to make light of those issues but in the same lines of ‘female identity’, Who is Dream Wife’s Dream Wife?

Bella: The Dream Wife does not exist!

And that’s the thought behind the name?

Alice: Yes definitely, it’s about flipping the script because a woman is not a commodity to be sought after and shouldn’t be put on a pedestal. Especially in music, it’s important to be seen on an equal playing field in terms of gender equality. It’s about flipping the script on the idea of the ideal woman that’s something to be possessed somehow, but at the same time we are each others dream wives because we’ve done this ourselves and supported each other through it. I’d say that’s the real answer, these two are my dream wives but definitely challenging what that means for us.

One thing I’ve noticed in your songs is that, to anyone’s ear, they are layered, they are very catchy to listen to but then when you look at the lyrics there’s a literal message as well as a metaphorical one. In that context it made me think of a quote by Oscar Wilde, “Give a man a mask and he will tell you the truth” Do you find it easier to tell the truth to your family and friends or are your true feelings hidden within your music?

ALice:I think ultimately music is a language that everyone can understand and when everyone stood together in a show, like in our song “somebody” it’s about everyone being there together and standing in solidarity; I think that transcends the music because then it becomes an event that’s happening for everyone.

Bella: Plus I think once you’ve released a song it’s like you’ve given it to the people in a way – it’s like everyone can take their own representations and their own meanings from it you know, the songs mean whatever they mean to us, to them, there’s the collective meaning, the individual meaning. I have very strong interpretations of a lot of the lyrics that are incredibly personal and aren’t what {Rakel} intended them to be, people just take what they need from it and all exist at the same time.

Rakel: That’s the exciting thing about it, people interpret it and you realise that some simple words and how they are phrased with the melodies in music can bring so much meaning to other people. The song isn’t how I see it – the song is how everyone individually sees it. Like for example ‘Somebody‘ which is maybe originally written about not wanting to be judged for your body, and not wanting to have a court of law judge you because of your body and whatever happens to it, but also a lot of people with disabilities that we met this summer coming to our shows said that the song spoke to them so much because people judge them for “being blind or being in a wheelchair rather than actually getting to know me and realising that I’m a real person“. And so I thought that was a really great layer that was added to it by someone else because it’s such a simple phrase, “I am not my body/ I am Somebody”, people make it their own and that becomes the song!