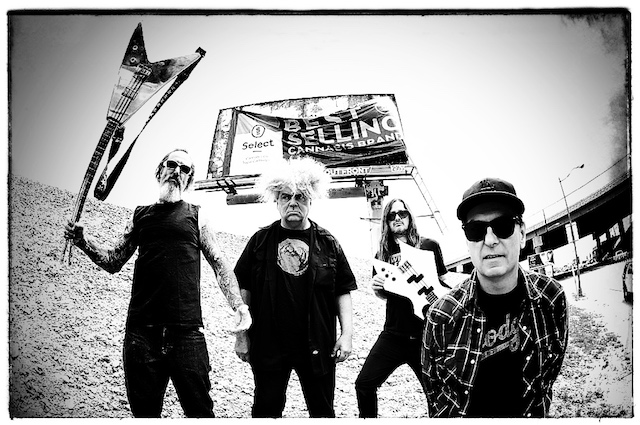 When two bands include members of Redd Kross, Butthole Surfers, Sonic Youth, Heatmiser, OFF and Pussy Galore and that is BEFORE you mention Melvins and Jon Spencer you know you are in the presence of alternative rock royalty.

Jon Spencer, although playing essentially solo has a touring band he dubs ‘The Hitmakers’ so he is augmented tonight by Sam Coombes (Heatmiser, Elliott Smith) on keys, M Sord on drums and his old Pussy Galore colleague and former Sonic Youth drummer Bob Bert pounding the sheet metal trash with hammers! Playing heavily from his, not quite out yet, new record ‘Spencer Sings The Hits’ he suffers two minor equipment failure false starts but launches headlong into ‘Do The Trashcan’, the first single from the album. It’s a raw Cramps/Elvis style punk rock cacophony and Spencer is on fabulous form; but not sure if it’s me but the static audience appear to be pretty stoic in their lack of response to some serious rocking. Blame social media for dulling people’s senses and the irony of ‘Fake’ is lost on this crowd, but armed with a career highlight of an album things start to hot up towards the end and by the time a cover of The Modern Lovers, ‘Roadrunner’ things start cooking and the set is over all too soon. DANG!

Which brings us to the latest incarnation of Melvins with Butthole Surfer Jeff Pinkus (Flying V bass) and Redd Kross man Steven McDonald (Warlock bass) adding more bass attack. Swathed in red light the crowd immediately wake up and actual moshing occurs knocking the glass of red wine clean out of the hand of the fellow in front of me. This is how it should be. In an over 30 year extremely prolific career Melvins have never been a band to rest on their laurels and a wonderful selection of not necessarily obvious songs from past and present with the emphasis on the sludgier numbers rules tonight. To keep things relevant Melvins have not fallen into the trap of playing ‘The Hits’ (not that there have been any! Ha!). Just like The Fall they will not be cowed by their back catalogue. ‘Sesame Street Meat’ opens the set and bleeds into ‘At A Crawl’ from Ozma. Buzz Osbourne weaves a texture of feedback and riffs from his aluminium guitar and Dale Crover is still one of the most unique drummers in alternative metal; his unique flat cymbal approach is relentless tonight and there are no real breaks in the sound. Jeff Pinkus takes the microphone for the first part of James Gang/Butthole Surfers hybrid ‘Stop Moving To Florida’ a highlight from the latest album ‘Pinkus Abortion Technician’ whilst Buzz takes the Butthole part of the song. For all Melvins oddity, they have always acknowledged rock’s back pages and it’s really great to hear a straight cover of The Rolling Stones’ ‘Sway’ flippantly thrown into the set.

Things take a crowd-pleasing turn when ‘Let It All Be’, ‘Honey Bucket’ and ‘The Bit’ are played in succession. Steven McDonald really rocked his inner Derek Smalls with his flowing locks and extrovert stage demeanour; allowing Buzz to rock back and forward and drown in THE RIFF. On tonight’s reckoning, this line-up could well be capable of challenging the two drummers Big Business incorporating version of the band as Pinkus and McDonald appear so comfortable in driving the band forward. By the time, Gluey Porch Treatments noisy classic ‘Eye Flys’ plays us out it feels like the evening is over all too soon. Another job is well done.