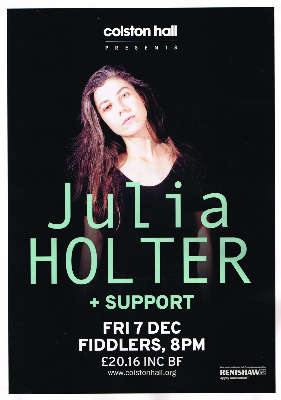 It’s hard to find the way into Julia Holter’s new album, Aviary.  While clearly one of the best records of 2018, it would also be difficult to think of another album this year that showed such complete disregard for its audience’s expectations.  I could tell you the two or three things that crop up everywhere else – that one starting point might be the line ‘I found myself in an aviary full of shrieking birds’ found in an Etel Adnan short story, and which Holter takes as a metaphor for memory and thought in our distracted and impulsive age, or that her other literary sources include Sappho and Thomas Aquinas.  There’s the LP’s audacious ninety minutes long running time, how its genesis was in improvisation, and how medieval music, Occitan poetry and Alice Coltrane’s Universal Consciousness are its touchstones.  I could even start going on about hocketing, but frankly, I’m starting to think that a lot of this stuff actually gets in the way.  Since I first heard it a few months ago this jewel of an album has had me a bit flummoxed and I’ve been eager to get down to Bristol’s Fiddlers tonight to experience it live.

She begins alone onstage, just her voice and the keyboard, and in the hush of ‘In Gardens’ Muteness’ I can actually hear my pencil scraping in my notebook.  Here, and throughout the set, there is a sense that this work is daring, or somehow exposed.  There’s an iciness and ethereality that recalls Vangelis’ Blade Runner, and that same sense of substance.  This is a sellout show in a small club, and she’s performing just a few metres from the bar, and there’s nothing but rapt, earnest silence in here.  It’s hardly fragile.  It’s more like the courageous sense of exposure that comes from being in love again, of daring yourself to push past the last time.

Joined by her band for the fanfare of ‘I Shall Love 1’, the devotional qualities of Holter’s words ring out.  Not I Will Love, or I Ought to Love, or I Must Love, but a very definite and chosen Shall.  Recently she’s spoken of her belief that ‘empathy is an obstacle to people in power who know they can’t stay there if people start working together and listening to each other’ so this could be taken in an impersonal political sense.  It certainly makes love sound like the heroic option: a powerful fusillade of bagpipes and trumpets, warlike bass notes, rolling drums and defiant voices cutting a swathe through a cold, unfortunate CGI army.

She’s touring with some of the artists who worked with her on the album and playing a set almost entirely composed of music from Aviary, and is clearly relishing the chance to present these songs in this form.  It sounds as if there are many more people on stage than in fact there are, in the way that classical instruments can sometimes sound more full-bodied than you expect.  ‘Whether’ and ‘Underneath the Moon’ take on rowdy lives of their own tonight, and by digging into formlessness Holter reveals something of the world that otherwise might be hidden, that the pat truths and structures on which we rely no longer yield the good things they used to.  The Occitan poetry of ‘Chaitius’ builds into something that sounds inhuman, then falls away into itself, and the handful of songs drawn from 2015’s ‘Have You in My Wilderness’ also teeter gleefully on the edge of disintegration.

It speaks of survival when, as in the album, Holter returns with the reprise of ‘I Shall Love 2’, and capturing the prevailing mood of pessimism she never gives in to it.  It’s almost as if she’s one of the few artists around who has grasped the implications of themselves, and of what the world is now, and of what it is to make music in it.  You’d have to actually be listening to jazz to find something else as bold and impulsive as tonight’s show.  It’s not jazz, of course, in spite of the enormous debt to artists like Coltrane, it’s too medieval for that.  But she’s definitely closer in ambition to Kamasi Washington than Kate Bush, who she is often compared with. Often I find myself encountering the latest thing and feeling that, well, it’s very nice, but it really could go a lot further.  We have all of music, all it’s wildness and weirdness and history at our fingertips, and audiences apparently hungry for atonal Occitan troubadour synth-hocketing.  As Holter affirms, “in all the human errors / there is something true”, I’m pushed to think of a better show I’ve seen this year and in the face of an experience like tonight’s concert, can’t escape the feeling that albums are really only works of reference.  I’ll take one gig like this over a hundred great LPs, please.