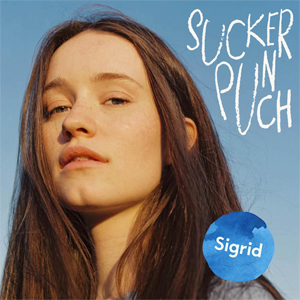 Sigrid’s debut album is with us at last. You’d be forgiven for thinking she’s a veteran of the business given the vast amount of exposure she’s had on British radio and television during the last year or so instead of a T-shirt and jeans clad 22-year old from a remote part of West Norway.

I’m not the only one to have wondered out loud whether this level of hype would turn out to be justified. And especially so in her case because as with Norwegian compatriots Pom Poko, whose debut album was reviewed a week ago, in the absence of a catalogue she’s been making a name for herself predominately as an all-singing, all-dancing live performer. Sometimes such folk can’t hack it in the studio, or vice versa.

The album opens with the title track ‘Sucker Punch’. Immediately you grasp what Sigrid is all about. She’s big, bold and sometimes a little brassy. Her snappy songs tend to come in snatches or chunks, the verse often ending on the punch line. Here it is “Sucker Punch” if you pardon the pun(ch). Visually, she’s all action, here in the video never still for a moment and wielding her gloved fists around. She’s the girl you might pass on the streets of Bergen with half a glance, just like early Madonna Ciccone in Chicago or  Stefanie Germanotta in New York, but, like them, she doesn’t care.

She’s Sheena Easton’s ‘Modern Girl’ living her life to the full, “building her world round no single man”, dropping out of relationships confidently because she knows the next one is just around the corner and that it will hit her again with that unexpected punch. “An independent lady taking care of herself”, as Sheena envisaged almost 40 years ago. She’s a poster girl for an entire 18-30 generation of pale Nordics and North Europeans who see her when they look in the mirror in the way the Floridian Ariana Grande became one in North America to the tan-lined teens there.

Her musical backing is big and bold, too, with a couple of synthesisers in full-on mode and rapid-fire booming percussion in many of her songs. But whatever the backing, it helps if you have a highly distinctive and clear singing voice, and she does. That’s the package.

All this is perfectly captured too in the pure pop ‘Don’t feel like crying’ in which she presents her issues, which no doubt many of her young female fans have as well, in a fearless, almost triumphalist manner, like there’s nothing that can deflect her from her chosen path, in affairs of the heart, or whatever else.

She states almost from the off that “wallowing in it would be such a waste…that isn’t gonna fix it anyway”. Then the hook, “I dry my eyes ‘coz I don’t feel like crying”. Here, she’s quite the opposite of artists like Adele or Fiona Apple, who wallow in self pity or indulge in verbal voodoo doll revenge. It’s like she’s found the secret formula that had evaded science, and parents, for centuries. Take it on the chin, dust yourself down and get on with your life.

‘Strangers,’ probably her best-known song, brings more to the table intellectually as she references her romantic encounters to the fictional ones of the film industry and her own youthful experiences learning song and dance. Written jointly with her producer Martin Sjølie, who co-writes much of her material (and he also writes with Aurora), it covers a lot of ground. You can imagine it being planned out in the same way as a movie’s storyboards. And of course it has that quivering chorus line which so enthralled Dame Helen Mirren on the Graham Norton TV show.

‘Mine Right Now’ is a strange sort of song. She’s back in ‘ships that pass in the night’ territory. “Hey, it’s alright if we don’t end up together/’Cause you’re mine right now”! It’s almost as if the lyrics to the verses don’t quite scan, they sound slightly awkward. But the song’s not about the verses; again it’s about a huge, booming chorus, played with what sounds like a bass guitar that’s been plugged directly into a National Grid power surge and an all-stops-pulled-out organ. In total it’s like one of those 1980’s epics that came out of the U.S., such as Foreigner’s “I want to know what love is’ or Toto’s ‘Africa’. Then it ends on a delightfully melodic little outro which could form the basis for another song entirely.

The premise of ‘Basic’ isn’t immediately clear. It seems they are in different cities, separated by many kilometres, but she doesn’t want to get too close either. This causes complications when all she wants to do is to be “basic”. To make the ‘separation’ point, for part of one of the choruses it sounds as if she’s been locked out of the studio and has to sing through a wall. ‘Basic’ isn’t as tuneful, the chorus is weaker and the intro, in which I thought at first Sigrid was singing “Iwannabanana” is a little bizarre. For all that it’s still a song a thousand wannabes would love to own.

The big production takes a back seat in ‘Level Up’, a sedate verse-chorus-verse-chorus ballad which she delivers in a manner not a million miles from that of Regina Spektor. The air miles have been used up and now she’s in his house but she’s already packed her suitcase ready to go. For once the lyrics don’t figure. “Our time is short so we don’t take our chances”. I would have thought that’s exactly what you do. This soap opera runs and runs.

And indeed it appears to continue in ‘Sight of you’. In the first line she sings, “It’s a lonely feeling, waving you goodbye”. What, she’s gone and done it, walked out on him? It turns out the song is about the difficulties of touring; early morning flights and all, versus the joys of being on stage with her band and the sight of her fans in the audience. At least she doesn’t call them ‘warriors’ like Aurora, ‘weirdoes’ like St Vincent or Gaga’s patronising ‘little monsters’.

The intro has Eurovision Song Contest written through it like Blackpool through a stick of rock. And then it gets even more Eurovision: the big orchestral production, the memorable hook, the cutesy little ending. Curiously, she has joked that she’d like to write a song for the infamous contest but couldn’t see herself actually performing it. Well I’ve got news for Sigrid – this is it.

Coronation Street returns in ‘In Vain’ in which the relationship seems to have developed, “I don’t know, seems crazy how we got this far”, but it’s in trouble, “There’s something ’bout you that felt pretty good/ that I can’t see anymore”. This track is quite different. Supported in the main only by acoustic guitar its cadence is what I’d expect from Adele, and as it progresses Sigrid develops a venomous timbre I had no idea she possessed. It concludes with the trademark big chorus but not before an irritating bridge that doesn’t fit the song and which might have better been omitted.

Intriguingly, she slips in an expletive several times, “fuck me up”, almost as a dare. It’s exactly the same one that did for her compatriot Sol Heilo on the opening track of her debut album. A tad risky for a performer whose persona is based on wholesomeness. You won’t be hearing what is otherwise an excellent track on Radio 2 any time soon.

‘Don’t kill my vibe’ was Sigrid’s signature song before ‘Strangers’, the one that brought her to the attention of opinion formers in small venues and later at festivals. In a way it is surprising it made it onto the album but then again, can you really just ignore your anthem, and one that chronicles your own struggles to convince your peers of your writing ability?

‘Business Dinners’ is a lighter song than any other with multiple voice-overs, rapid-fire lyrics and a lot of la la – ing.  It seems to be about artistic integrity and having to fight for it. That’s about it, really. A serious subject in a lighter vein.

If he was ‘mine right now’ in the second track, he’s ‘Never mine’ in the penultimate one and you do start to wonder if this is some sort of bad romance concept album. To make the point, “never” is repeated 17 times in the chorus. But there’s a caveat in the bridge. “Between you and me, I want you back”. I feel a sequel coming on.

Because it’s Sigrid you might expect a spectacular finish but despite its title ‘Dynamite’, co-written by Askjell Solstrans, is the gentlest song on the album as she again ventures into Adele territory and, one might argue, beyond. The final word on her beau is “Don’t know where I am with you”, the opening line, but more notably there is a great deal of clever word play throughout the song, for example, ‘Oh, I wish we had a common view/you see my red as blue’.

This juxtaposition of colours, red and blue, and their meanings, was represented perfectly by the majestic Fiona Apple on her ‘Red, Red, Red’, except that Apple also threw in yellow, for cowardice. And “you’re as safe as a mountain/but know that I’m dynamite” correlates with Apple’s “What’s so impressive about a diamond/Except the mining/But it’s dangerous work/Trying to get to you too”.

This is top class writing and delivery from the piano intro to the final lingering note and, hand on heart, not a stylisation I was expecting to hear. With this song alone, which I assume will be a single before long, Sigrid will win many new friends.

In titling the album ‘Sucker Punch’ Sigrid hit the nail on the head. You might think you know her from the singles and their style is evident throughout. But she packs a surprising, unexpected uppercut of her own in the form of compositions that you couldn’t see coming.

‘Sucker Punch’ will be released on 8th March on Island Records.