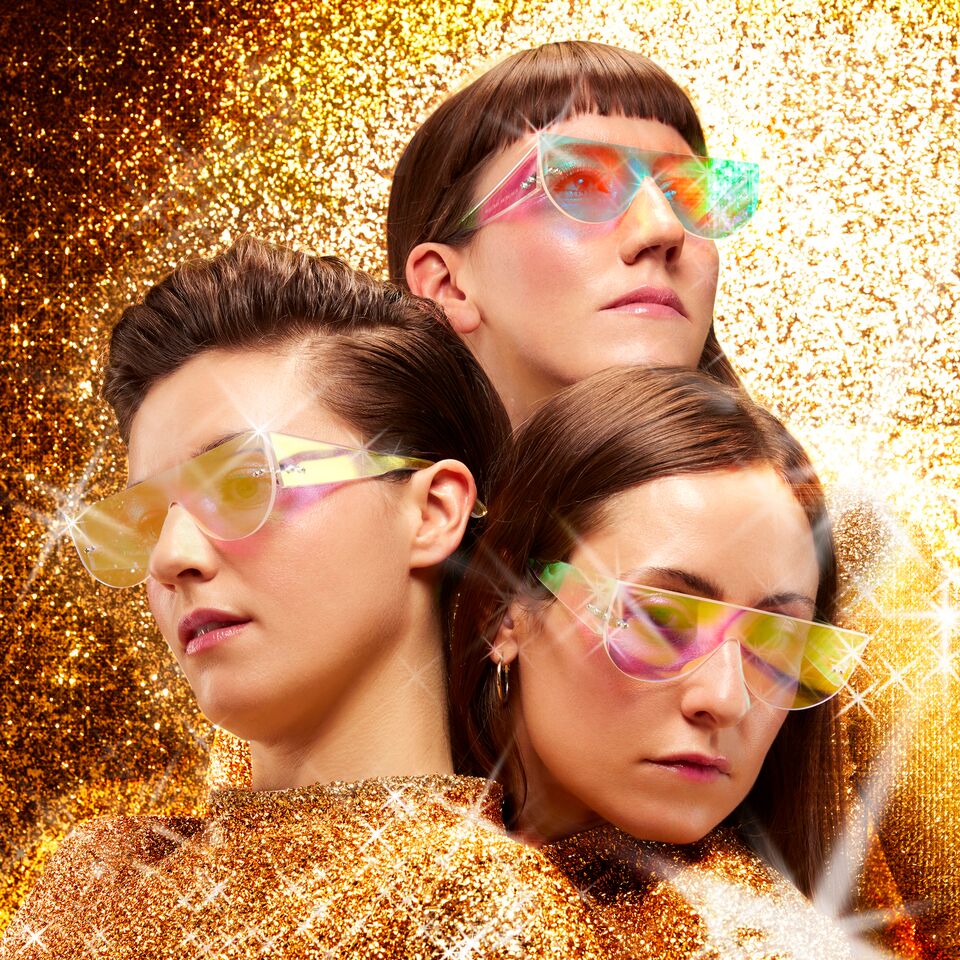 Stealing Sheep‘s first album Into the Diamond Sun was an exercise in weird, spacey folk with an electronic sheen. Its follow up, Not Real took those electronic sounds further. It was an occasionally awkward patchwork of those early influences with their newfound experimental urges, at times threatening to go full electro pop but never committing to it. It was a brilliant album but by no means an immediate one. Four years later, No Wows is not the same band. All of those suggestions that there was an album of pop smashers fighting to get out have come true. No Wows bangs.

From the off, ‘Show Love’ opens with bright, glossy synth arpeggios and snappy drum machines. The vocal interplay between the three of them has never been better than the closing minute of harmonies and intertwining vocal lines before an unexpected key change. It’s quickly followed by the fizzing synths and popping drums of ‘Back in Time’. Where the last album was concerned with what wasn’t real, here the focus is on the opposite, singing that “It’s hard to find love in this town/Something real that can’t be found… This is love/This is reality”. It’s a pointed step from their previous work, a fresher, more polished vibe that comes from embracing pure pop. But there’s something charming about the way it’s still sung in their regional Scouse accents, exemplified on single ‘Joking Me’ with its suggestions that “Let’s meet up and let’s go out dancing” met with a cry of “What? You’ve gotta be joking me”. It continues: “Now it’s the right place at the wrong time/All this time that I’ve just been waiting”. It’s framed as a kiss-off to a clingy ex but could just as easily be a reference to how they’ve moved on but they’ve not forgotten the hard work they’ve put in to get here.

Synth player Rebecca Hawley talks about a Grayson Perry quote about figuring out what you like and what you don’t as an artist, and how as a band they’ve had to try new things to “get confident about what we like”. But they’ve never been afraid to try new things. They’ve collaborated with various dance artists, from contemporary ballet to Morris dancers and led tributes to the suffragette movement and Delia Derbyshire. All of these things feed back into their music, and if that means that the likes of ‘Girl’ and ‘Big Wows’ wouldn’t be out of place alongside pop pioneers like the Knife and Robyn then so much the better. Like those acts, Stealing Sheep are making music and art that’s for the heart and the head. It’s impossible to predict where they will go from here, other than to say it’ll be in an interesting direction. The fact that they aren’t better known is a crime because they’re the most exciting band around.

Big Wows is released on Heavenly on 19 April.