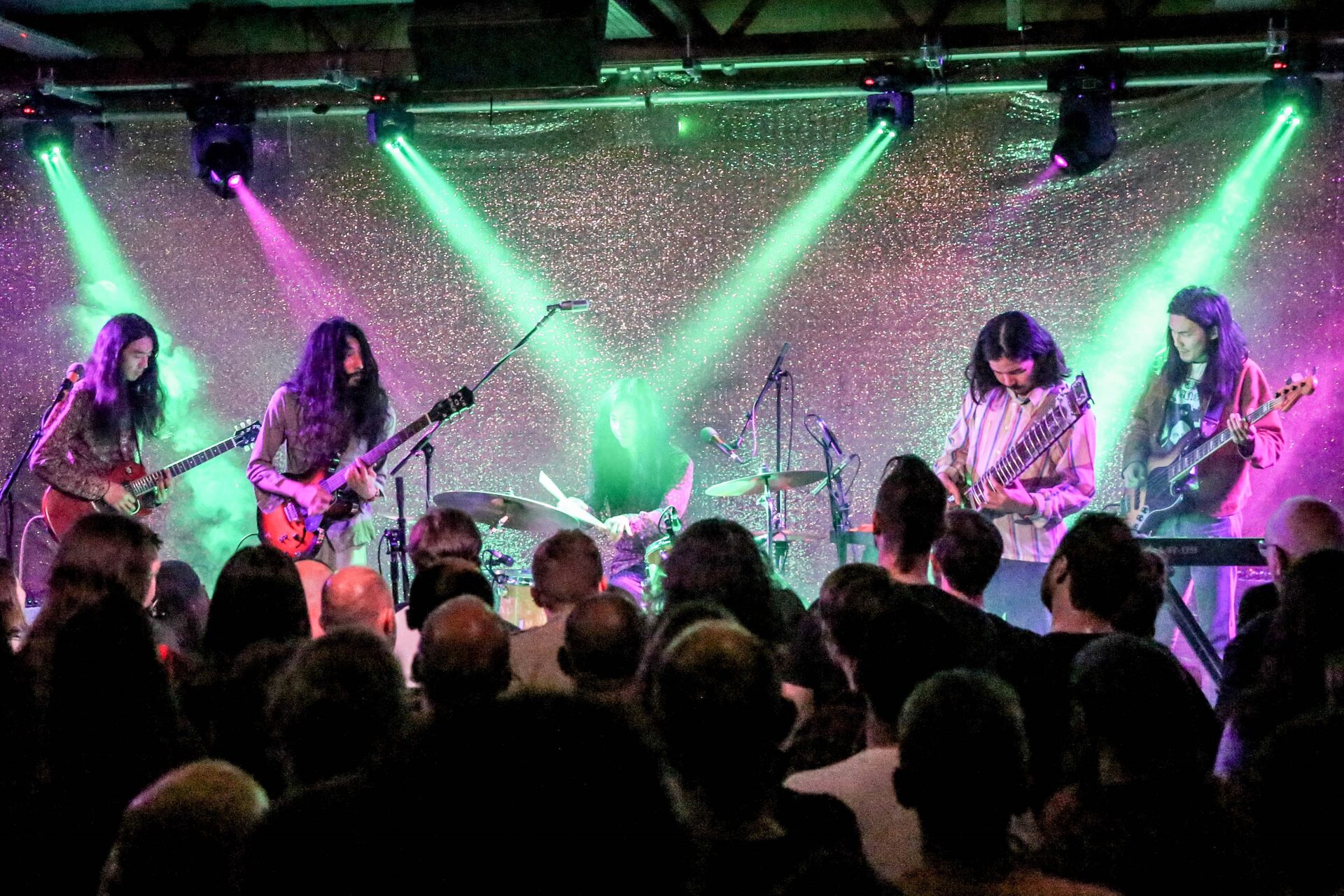 Here they come: five cats from Japan, who go by the collective name of Kikaguku Moyo. They sail the high seas under the freak flag of psychedelia but just like any other emblem of convenience this broad definition of the band’s music is rather misleading. Psychedelic rock undoubtedly provides a core element of their sound but as tonight’s performance will go on to firmly evidence everything from Indian Folk music to jazz, trance, and prog plus various mystical points beyond all come together to power the good ship Kikaguku Moyo’s cosmic engines.

Kikaguku Moyo first came into being in Tokyo in 2012 and quickly developed into the quintet it is today – founding members Go Kurosawa (drums/vocals) and Tomo Katsurada (guitar/vocals) having been joined subsequently by Daoud Popal (guitar), Kotsu Guy (bass) and Go’s brother Ryu Kurosawa (sitar). Since then they have been very busy. Four albums – the most recent of which Masana Temples was released last October and features heavily tonight – a couple of EPs; a brace of singles; and fairly constant live action in both Europe and the US which would give even Bob Dylan some very serious competition in the Never Ending Tour stakes. 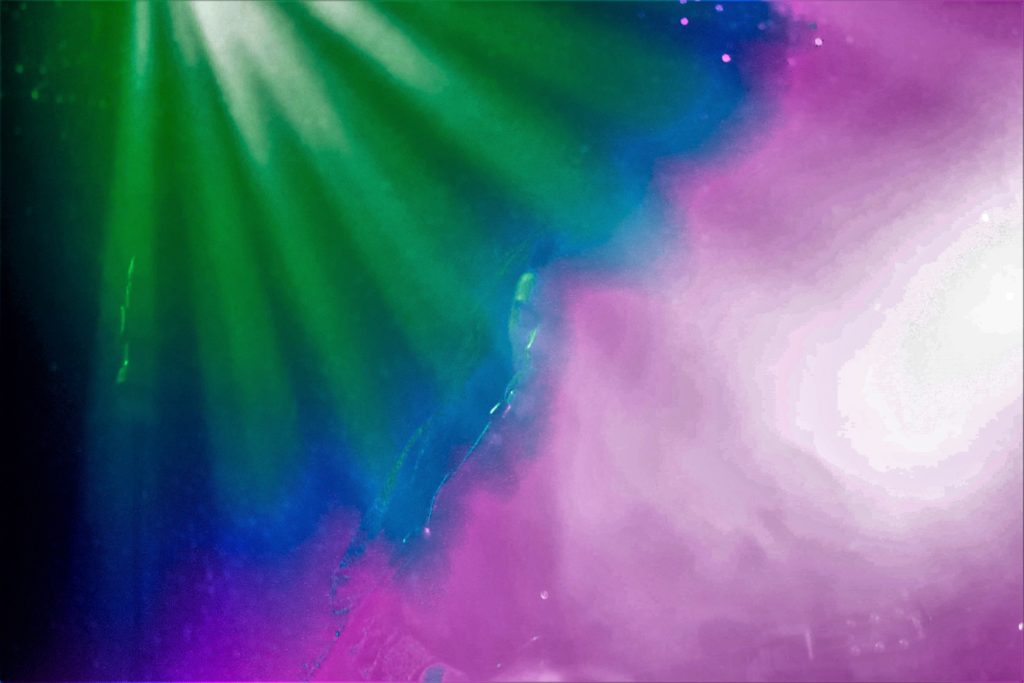 Bathed in a diffused sea of green, blue and pink light, the Brudenell’s Community Room takes on a strange dilatory vibe that lends itself perfectly to the more hypnotic elements of the Kikaguku Moyo sound. Their set – a heavily elongated, improvised encore work-out aside – is perfectly weighted, split almost equally into three distinct parts.

The middle section of the three takes me back to Earls Court in London in 1975 when Led Zeppelin were at the absolute peak of their powers and bisected their marathon set with a “wooden” interlude when each band member came to the front of the stage and together performed an acoustic interlude that included ‘Tangerine’, ‘Going To California’ and ‘That’s The Way’. Kikaguku Moyo do something very similar here with Go Kurosawa emerging from behind his drum kit to pick up an acoustic guitar whilst Tomo Katsurada plays cello on a couple of numbers whose delicate, pastoral qualities are eerily redolent of those quieter passages from Led Zeppelin III and IV.

Either side of this period of relative tranquillity, Kikaguku Moyo take us on an epic sonic journey that ebbs and flows, shifting mercurial shape as it goes on its seismic way. The opening song stretches out way beyond the 15 minute mark as the motorik incessancy of Can’s ‘Yoo Doo Right’ merges into some early Peter Green-era Fleetwood Mac blues rock. As this celestial trip continues past various other staging posts you can detect other more subliminal influences percolating through their music. There are shades of both Brazilian and Indian music (the latter evolving from Ryu Kurosawa’s expressive use of the sitar). And there is the lingering spirit of those powerful soundtracks from low-budget yakuza movies of the 1960s. It all leads us to develop a far greater global understanding of Kikaguku Moyo than that of just five cats from Japan who happen to play psych rock. 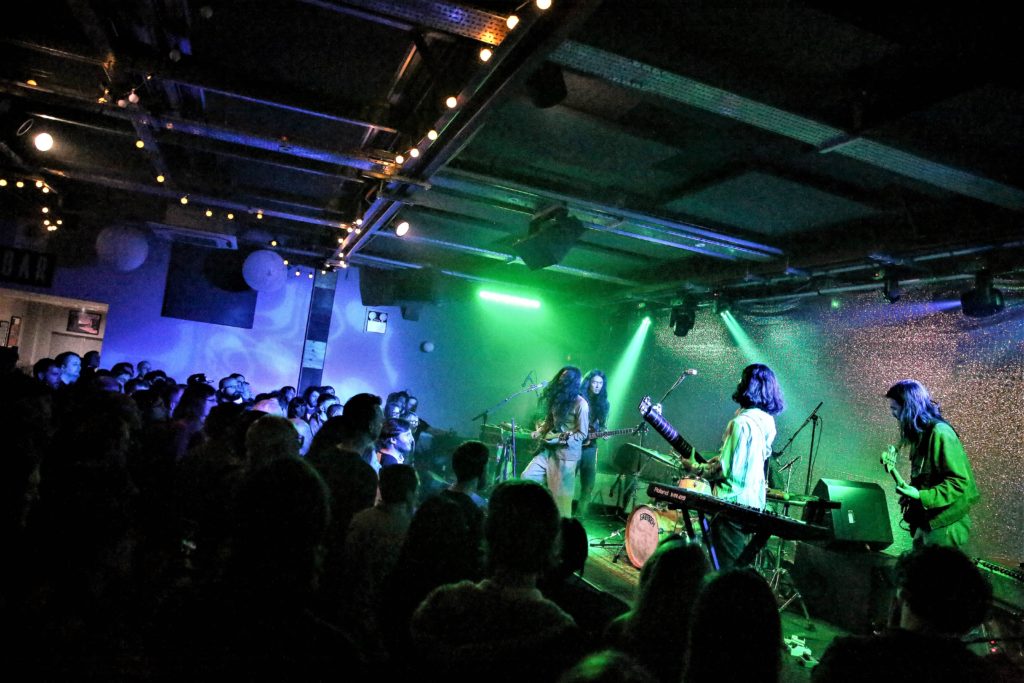