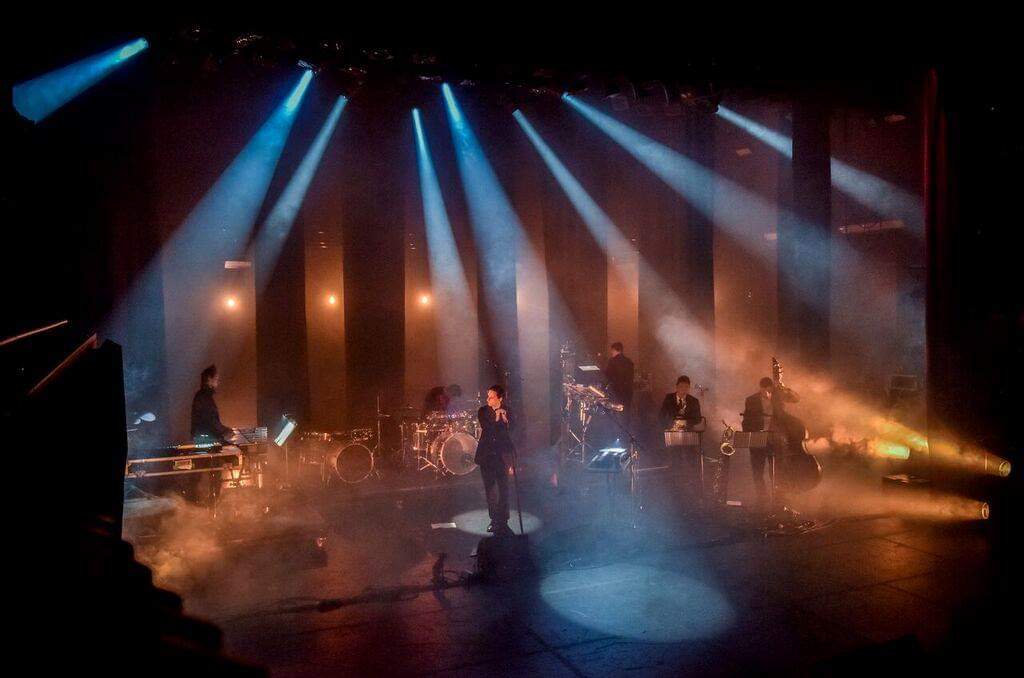 The second of three nights at the Manchester International Festival curated by David Lynch saw the return of the Texan Chrysta Bell (who is active over all three nights as performer and compare), and performances by local pysch-rockers Whyte Horses and Southend’s uncategorisable, inspirational These New Puritans.

As with the previous night’s performances (Bell, Douglas Dare and Anna Calvi) all of them benefitted from the choice of venue, the very intimate though highly professionally equipped Theatre 1 at Home, and the staging, which was at times every bit as surreal as anything you might find in an episode of ‘Twin Peaks.’ I half-expected dwarves, giants and Killer Bob to be roaming the stage and in the case of Whyte Horses I wasn’t far wrong. 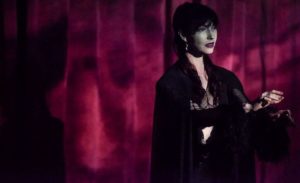 Chrysta Bell again opened proceedings with another suitably eccentric introduction which rambled incoherently over everything being nothing, the converse, and an adaptation of Donald Rumsfeld’s monologue on unknown unknowns. Though the bright spark that she is, I doubt she wrote it; it had Lynch stamped all over it.

And it set the scene perfectly for Whyte Horses, Dom Thomas’ ever-changing line-up that tonight totalled nine (there can be more) including three singers who conjured up gorgeous harmonies right through the show. Their brief was inspiration from the mythical Roadhouse in Twin Peaks.

The Bang Bang Bar, to give the Roadhouse its proper name, was favoured by lovers of good music in that blighted community and that’s what Whyte Horses served up, in a manner suggestive of something between Polyphonic Spree and The  Limiñanas. And one of the four guitarists looked just like one of the Hanson kids. In fact, you can’t easily dismiss the notion that they are all younger than they probably are.

They employ the 1960’s French Yé-yé sound quite extensively. Perhaps they could spark a revival, like Reggae’s. Vive l’entente cordiale and all that. They are a static band though, and peering through the dry ice mist that enveloped them for 45 minutes could have been taxing. So the addition of a couple of medieval jesters who clambered around the stage on all fours was justified at least visually. What it all meant though was beyond me. But then so was Twin Peaks.

Out of the blue, Chrysta Bell joined them for a couple of songs, including, both bizarrely and wholly appropriately, Sonny & Cher’s ‘Bang Bang (My Baby Shot Me Down).’ You can’t get more Lynchian than that.

When she was back there 20 minutes later Chrysta Bell’s dark contralto voice, supported as it was during the previous evening by the excellent reverb-ridden slide guitar of Jon Sanchez (pictured in the video, below), once again came as a pleasant diversion from the battalion of sopranos out there. We need more of them.

This lady generates mood like few others, whether she’s singing, or dispensing what she herself likened to gibberish in her opening remarks, or just standing there surveying what she can see of the audience. She could have stepped straight out of a Star Trek teleporter and is quite spellbinding.

Her set was again preciously short, comprising, inter alia, ‘The Devil inside me’ from her association with John Parish, and Lynch collaborations such as ‘Real Love’, the dark cabaret ‘Time Never Dies’ and the dive-bar influenced ‘Swing with me’  reprised from the previous night. Simply awesome.

For me, they fall somewhere between fellow Essers Depeche Mode, and Robert Wyatt but that can be no more than an indicative approximation, their ambient electronica punctuated by everything from punk, and prog rock, to free form jazz.

While they’ve recently released an album (‘Inside the Rose’) they stuck at least partly with the spirit of the MIF by putting together a specially devised set of re-imagined work from David Lynch films such as ‘Eraserhead’, ‘Lost Highway’, ‘Blue Velvet’ and ‘Fire Walk with Me’ as well as the Twin Peaks soundtrack, and  including music by David Bowie and Angelo Badalamenti who was jointly responsible with Lynch for the Twin Peaks score although tracks from ‘Inside the Rose’ and second album ‘Hidden’ were included. The encore was the powerful but indecipherable ‘We want war’ from ‘Hidden’, a song dating from 3000 BC according to Jack Barnett, which hardly demystifies it.

The staging for this set was spectacular. As the curtain opened it could have been the interior of the Nostromo, the spaceship from the original ‘Alien’, with its winking lights scattered across numerous synthesisers, enveloped by a dry ice mist in a hue of blue steel. As it progressed the evolution of the lighting suggested other settings, such as a Greek temple.

You can always judge a top band by the inter-changeability of its musicians and while Barnett’s brother George is concerned only with drums and percussion (and he’s exceptionally tight) other musicians, including a couple of guests mainly on (occasionally bowed) double bass and sax, moved easily between instruments.

The ‘spine’ of the band though is the two Barnetts, the only full-time members, like a top class goalkeeper and centre forward, Jack moving back on to a second drum kit for an instrumental session towards the end.

The best compliment I can offer them is that while Whyte Horses’ set was inspired by the Roadhouse, These New Puritans played exactly what you’d expect to find in it.

Three hours spent in a parallel universe was over in a flash and as I left the auditorium I had to wonder if Chrysta Bell’s self-proclaimed gibberish about everything being nothing and nothing being everything might just make sense after all.