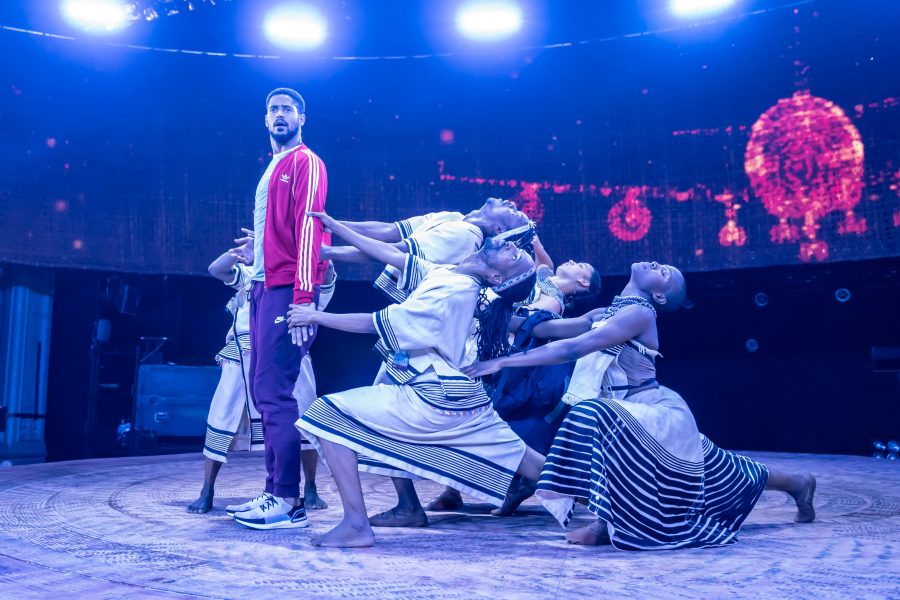 An instant ‘good’ atmosphere – full of music and life – is always suspicious.  There’s no build-up or warm-up, just right into loud and fast; coloured lights flash and pulse.  There are people dotted all around the room and more trickle in behind.  A ring of wooden steps runs around one side in a vague half-circle in front of a raised platform also ringed with steps.

MIF19 presents the world premiere of Tree.  Idris Elba – inspired by his time in South Africa whilst filming Mandela: Long Walk to Freedom, and music from his album Mi Mandela, Idris Elba created a new piece of music theatre, and brought Tree to life with director and co-creator Kwame Kwei-Armah, with the help of MIF.

The music stops and the stage empties.  An actor appears and asks “Are you alive?” and explains that “sometimes, the dead want you to find them.  Need you to find them.”  A bed is brought onto the stage.  Kaelo (Alfred Enoch) is late for a flight and a journey he doesn’t want to make.  His life, it seems, is in utter turmoil.  His mother Cezanne – played in later flashback scenes by Lucy Briggs-Owen – has died (which is the reason for the journey), his on-off girlfriend has moved on, and by the looks of things, there’s more to come at the other end of the world.  Kaelo is an angry young man tasked with returning his mother’s ashes to her home country.

The ‘flight’ is a dance, and most of the set and props are held by ensemble cast members, while lights and imagery flashed across the walls tells the passage of time  At his arrival he receives a less than warm welcome from his grandmother Elzebe (Sinead Cusack).  He comments that Africa is cold.  And then things get confusing as a nightmare dream sequences seems to play out, but it’s unclear what’s going on, aided and abetted by the centre of the stage spinning in a circle.

Breakfast is tense.  His grandmother explains, reluctantly, that Kaelo is the ‘first coloured man to sleep in this house.’  The journey was made out of obligation – but is it a necessary journey for Kaelo of self-discovery and Family?  The audience become part of the set with props and dressings as the whole space is used.

Kaelo’s world and its view have expanded.  He didn’t ‘think’ about the vastness of the property and its grounds – likely, I think, due to his view of The World being centred entirely on London.  London is in many ways a global city, but it is also lonely although crowded with people.  It’s a comfortable bubble, and Kaelo’s bubble is about to be burst.  The internet and the news media makes us feel part of something bigger, but there’s no real connection.  Real connections are heard, touched, seen, smelled, and tasted.

The land ‘speaks’ – “plant me a tree.”  Trees are fascinating, really, and it’s a fitting symbol: a tree has strong roots, and an old tree has stronger, deeper roots.  But a parched tree has deeper roots still as they fight for a supply of water during a dry season or drought.

Eventually, Kaelo admits to Elzebe that his mother – her daughter – passed away and had been cremated, which starts a whole other storm of tradition and ritual.  Damaged and broken relationships, past and present, are brought to the fore.  Kaelo was conceived in secret from a forbidden relationship, and secrets seem to be something of what holds most, if not all, families together while simultaneously tearing them apart.  For Kaelo, everything is turned on its head.  And there are more secrets to be learned – he has a half-sister.

Hoping for another familial connection, Kaelo goes looking for her, only to discover that her world and her view of that world is a very different place.  It’s a visceral and often violent place, most potently shown in a protest with a strong anti-Nelson Mandela element.  They both struggle with the fact that neither of them made any attempt at contact previously, even though their lives crossed previously in London.  In his quest to find his father – Lundi (Kurt Egyiawan) – he learns, in the most brutal way, that his father was murdered.  It’s from here on in that Kaelo’s threads of connection, history, and familial loyalty are thrown into disarray.  He is guided by one of the groundskeepers on his grandmother’s land.  It is he who shows Kaelo who he is, where came from, and where he goes next, albeit in an understated way.

Wires host Kaelo above the stage and the past comes to life.  His parents meet in a dance beneath his feet; a fight breaks out between the people and the police; his father’s warning to his mother’s family that their home is about to be attacked; Lundi’s murder; Cezanne leaving South Africa, and pregnant with Kaelo.  And the tree.  The tree, we’re told, is where his father went when he felt lonely.  This tree, that offers comfort, shelter, a listening ear.  And it’s a tree that marks his father’s grave.  The tree itself is a giant mass of ropes and pulleys and netting, and it fills most of the room.

In a jarring twist of bathos, a nice and rather touching moment, finally, between brother and sister, the moment is broken by the words.  “I just want to dance… Let’s have a big fuck-off rave!”  Loud music is played and another dance party begins, this time around the tree.  The cast take their final bow and the audience is one again invited – and encouraged – to join in the dance.

Tree is a wonderful production, with a touching story about family, and belonging, not just to people, but to places – threads of real connection – and explores the history of South Africa at the same time.