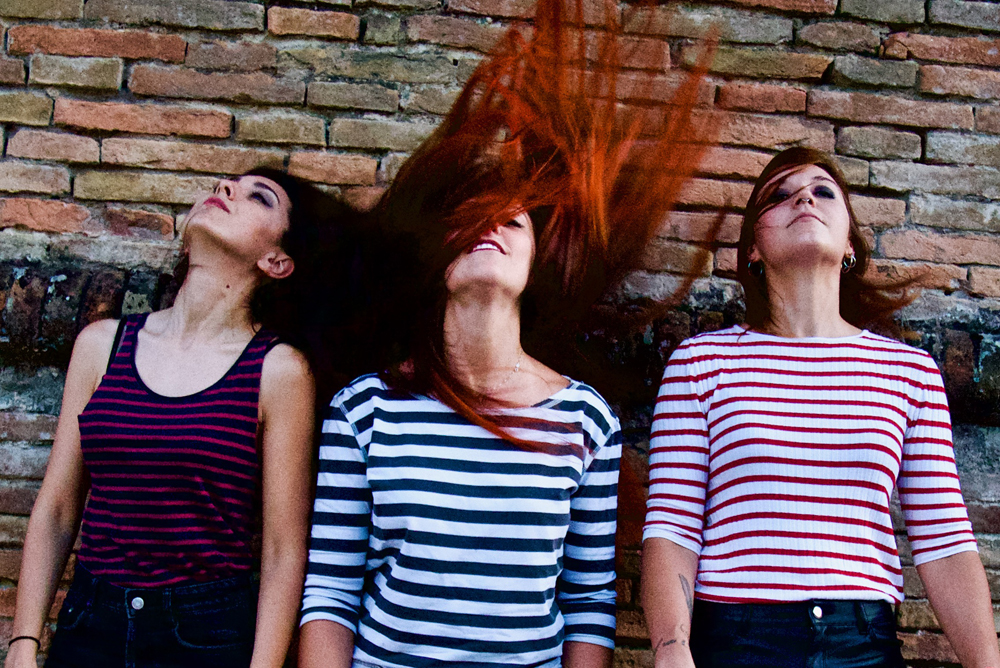 Signing to one of Europe’s leading garage-punk labels Area Pirata, the trio – Valli (bass/vocals), Monty (guitar) and Serena (drums) – are set to release their debut mini-album in the New Year. It will be preceded, on Friday 27 September, by the digital single ‘Just Friends’.

Smalltown Tigers hit the UK in October for their first ever overseas dates, playing four gigs in three days, including an appearance at female punk collective Loud Women’s 4th Birthday Party at the Hope & Anchor in Islington.

Why we love it?
Careering down the highway, with buzz saw guitars and scream-along lyrics. ‘Just Friends’ is a slab of rough and raw punk attitude that burrows its way into your brain, with its chunky bar chords and girl-gang indestructibility, like all the best ragged punk anthems. Awesome!

What they say? Los Blancos have announced they will release their debut album Sbwriel Gwyn (transl. White Trash) via Libertino Records on 27th September.

Vocalist and bassist Dewi Jones explains “it’s a song about empty rhetoric and how something that is utter nonsense can sound profound and meaningful. It is not necessarily a dig at religion; it can apply to popular culture or politics, such as ‘brexit means brexit etc’ or cringey inspirational quotes on social media”.

Why we love it? Spiralling through the sky like a rocket, a dismantling of empty rhetoric, thunderous rhythms and caustic guitars are laced with a sneer. Formidable tuneage.

What they say? ‘Guitar Anthem’  finds the pair add a hint of disco to their signature raw house sound. Taking inspiration from late 90’s French touch, but with a distinctly British twist, Prospa pay tribute to their influences while crafting a tune that is undeniably now. An earworm FX-heavy guitar melody leaves you in no doubt how the track got its name.

With further DJ dates announced including two appearances at this year’s Warehouse Project season (September 21st & December 21st) and a second stint at London’s Printworks on October 13th, this time in the main room, there’s no question Prospa are this year’s underground heroes.

Why we love it? Deftly blending house beats, with simmering keys insidious riffs and soulful samples. Like being plugged into the national grid, you can’t fail to move your body to this. Fantastic and floor filling.

What? As This Day Fades to Another

What they say? Fast emerging Derby songwriter Emzae says:
“As This Day Fades to Another examines, with the help of punchy pop production, whether life could be less exhausting if we dropped our facades and stopped treating everything as a race.”

Why we love it? Popping, squealching and pulsing and coated into a refreshing early 90s-esque rnb swagger. The playful and inventive chorus is catchy yet houses a deconstruction the fruitlessness of being a part of the rat race. Emzae proves herself to be a prodigious emerging talent.

What they say? Originally a solo project for singer / guitarist, Elise Cook, Soot Sprite released their debut home recorded EP ‘Comfort in Concrete’ in May 2018. Over the past year, they’ve transformed into a full, collaborative band with the addition of bassist Ross Becker and drummer Matthew
Tiller.

The new EP ‘Sharp Tongue’ is their first release written and arranged as a group. They worked with producer Ben Green at Studio 54 in their hometown of Exeter, Devon.

Five songs follow varying themes around anxiety and self-reflection; struggling and coming to terms with issues surrounding self-esteem, toxic friendships, and abusive relationships. Songwriter Cook describes the record as “never feeling like you’re doing enough but also reprieve in the desperation to change how you think about it all.”

Why we love it? Elegant and dreamy, this affecting song threaded with majestic vocals that possess a trembling emotiveness that can cut you to the quick. The twitching drums and shimmering layers of guitar envelope into a heart on th sleeve affirmations, a throwing off the things and people that way you down. There’s a clear sense here of the dynamics that make a great song tick. Tremendous.

What they say? Denuo has released a new music video for latest single ‘Lucid’, directed by Tokyo-based filmmaker Pennacky. Filmed in the middle of a hot summer in Japan, the stunning dreamlike visuals reinforce the feeling of solitude and nostalgia in the music.

‘Lucid’ is Denuo’s first offering in 3 years. Welsh multi-instrumentalist Tom Mason’s previous releases, including 2016 EP Frozen Lake. Lyrically Mason flirts impeccably with memory and distance, ’Lucid” is the track that will make you want to roll down the car window and fall hopelessly in love with the sunset disappearing in your rearview mirror.

Mason describes it as “a love song to a place that felt like home. It’s a bittersweet feeling, almost like the denial of a breakup, where you’re trying to live in the memories of better times.”

Why we love it? Shimmering and intricate, and garnished with lilting, wistful harmonies, its the sound of the steam rising up from the pavement. The reflective choruses inhabit memories of better times and trying to let go of the regrets of the past. Exquisitely drawn.

Who? I See Rivers

What they say? “The themes of ‘Collide’ are of conflict and reconciliation, turbulence and transparency. In contrast to the familiar voices and relatable lyrics, the production of the song is both more contemporary and more adventurous than our previous releases, focusing more on creating space using a combination of gritty, acoustic sounds and sweeping, synthesised elements.”– I See Rivers.

Why we love it? Minimal production, a pallette of delicate instrumentation, sparsely puncturing percussion and excellent three part harmonies that are bonded with an affecting clarity. It shows why I See Rivers have such great talent and potential.