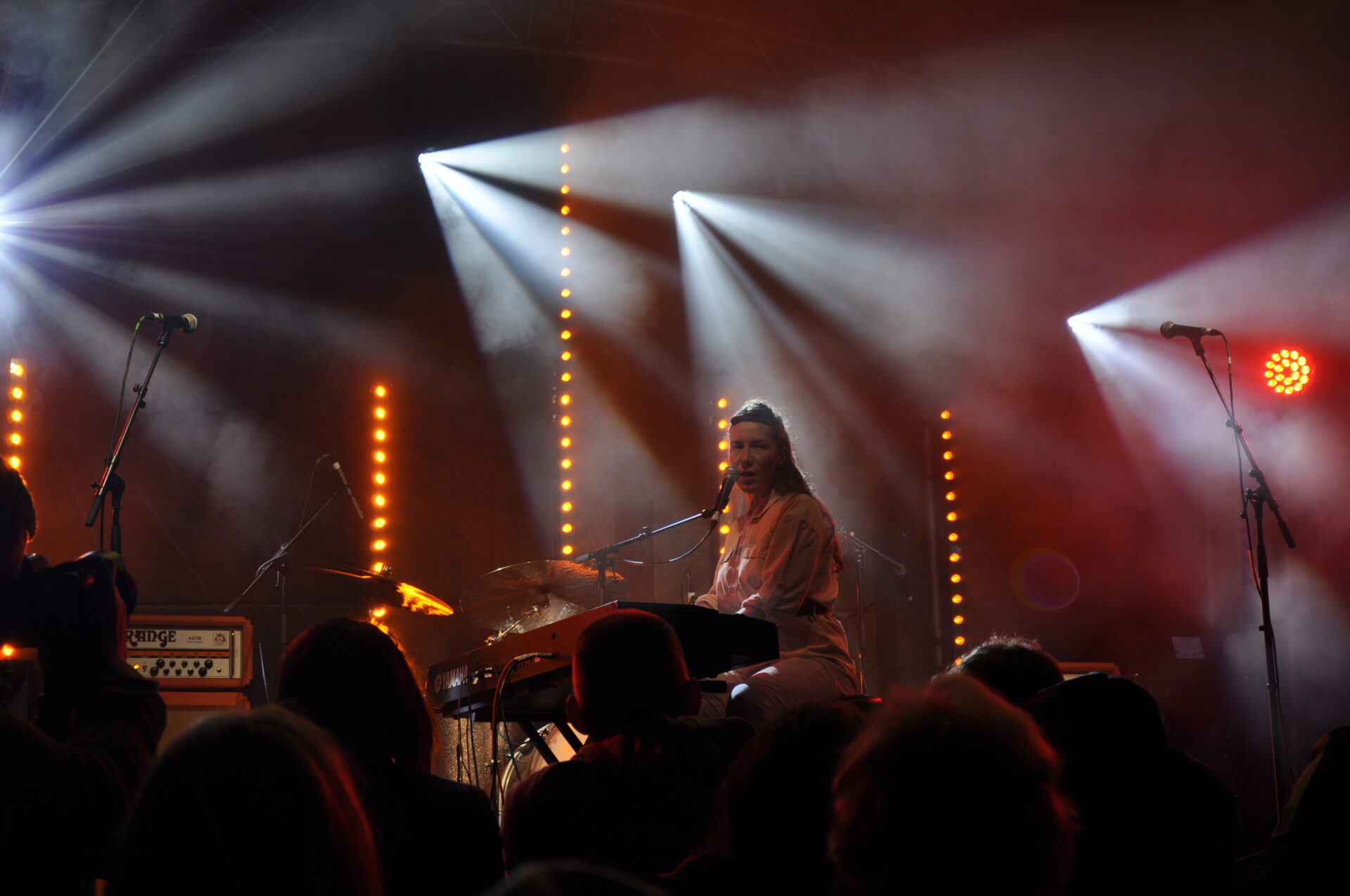 “I’ve never played anywhere like this before,” announces Rachael Dadd with a big grin. “It’s like being inside outside.” You can see that the thought appeals to this most questioning and formless of songwriters. It’s mid-afternoon and we’re in the south transept of Reading Abbey Ruins with a cluster of Thames Valley hipsters for the Down in the Abbey Festival. Founded by Henry I, who was buried there when he died after eating, and I quote, ‘a surfeit of lampreys’, the Abbey was slowly plundered and demolished during the Reformation. Henry is thought to be somewhere under a nearby playground now.

There’s talk of digging up the old king’s remains, as Leicester did with Richard III. You know, like it might put this town on the map. Sounds like a hard sell. Have you seen a lamprey? As death-scenes go, it lacks a certain Shakespearean pizazz. And does the abbey really need to be put on the map? It’s the town’s best-kept secret, an oasis of rubble by the Kennet, in the lee of the now-empty gaol. A wrinkle in the fabric of time, peeping out from a gap between the office blocks.

The cream of Berkshire’s singer-songwriters are milling about here today. Full marks go to Ever Hazel for coming up with the lyric “We’re living in a lonely time / watching animals online”. She’s very excited to be here and says so, often. The new single, ‘Tidal’, is an endearing paean to romance and hurricanes, and skips along on a series of electronic beeps. There’s something Arcadian about her songs, and intelligent and engaging as they are, they’re also a little too upbeat to get to quite where they could go.

Saltwater Sun, over on the main stage, play loud, brash indie power pop. Lead singer Jennifer Stearne has a big voice and some big tunes for it to clamber around on. She screams, yelps and growls her way through the set, songs like ‘The Great Deceiver’ and ‘The Wire’ hinting at a keen, thoughtful eye at work behind the shades.

And in this manner, we while away the time until Rozi Plain. As usual, she’s hard to pin down, but it would be nice to imagine the monks raising a flagon or two of sack to the meditative reverence of ‘Dark Park’ or ‘Symmetrical’. Her set today feels connected to a tradition of sweet, melancholy troubadours stretching back to John Dowland and beyond. As if to emphasise this, Plain lets slip that she’s playing another abbey next weekend. “I don’t mean to lessen the special uniqueness of this happening”, she says with a lopsided smile, “but it’s our ruined abbey epoch at the moment”. Well yes, and why not. She plays the kind of music you build abbeys for in the first place and is gone too soon.

Over at the acoustic stage, Bryde is playing a solo set, and without a full band her songs and her voice gain in stature. As shadows lengthen, without wishing to overdo it, there is a lachrymose ravishing of the senses at work, calling out to the ghosts of this place. She tells us she’s been taking stand up comedy lessons, “because playing live isn’t scary enough anymore”, then does something exquisite with her voice over the churning power chords of ‘Less’.

It’s just one of many lovely moments in the south transept today. We touched on Rachael Dadd already, and she’s cool as a babbling brook this evening. She plays songs from her forthcoming LP, ‘Arrow’ and ‘Language of Water’, and writing about it feels like trying to drive a nail into birdsong. Later, Darren Hayman is quietly superb in the near darkness, with his songs about astronauts and thankful villages. No slouch as a lyricist himself, it’s his take on William Morris’s ‘The Voice of Toil’ from Chants for Socialists that sets a fire burning – “Are we not stronger than the rich and the wronger / when day breaks over our dreams?” – Looking up from the news on my phone, I sincerely hope old Bill Morris is right about that one.

Things hot up at the main stage. The Wave Pictures show us a real good time. David Tattersall doesn’t have the best or most evocative voice, but tonight it’s like running into an old friend. Their songs radiate the warmth of quotidian matters, the boys next door, jamming in the garage, jumpers for goal posts, that kind of thing. ‘Pea Green Coat’ sets the tone of the set – minor moments made epic. Johnny ‘Huddersfield’ Helm steps out from behind his drum kit and sings “Johnny Cash died today / and you’d say / you’d say it’s not like Elvis … though is it? / and you would be right”. He steals the show again with the drum solo in ‘Never Go Home Again’, which also sees some big audience-handclap-action. Live they never disappoint – three superb musicians having a blast – and the set up at the main stage once the sun goes down is a bloody gift to them. Slick bass solos run into the effervescent guitar licks under the contrails of a passing aeroplane and the light dims around the barbed wire that still crests the prison walls. You could think too much about this ruined place, and the solid, good-natured thing they do brings you down to earth for a moment.

Kathryn Joseph, on the other hand, has come to completely wallow in it. She does ‘Tell My Lover’ with a look on her face that suggests she damn well knocked the place down herself just to get him back. Between songs she over-shares a few things with us, then adds, totally reassuringly, “I know I look like a crazy old witch with surrounded by pink crumbling ruins but actually I’m as happy as Larry”. Her music is the human heart in extremis, the sound of desperate, murderous, deranged emotion, “the madness in the blood”, and it points up one of the strengths of the abbey ruins as a festival venue – it’s a small space. It’s tight. You’re in close with your nose pressed up against this raw stuff.

Her songs run in and out of coherency, as though sense and meaning had been put to shame by that pleading, merciless vibrato. ‘Mountain’ goes after god himself, to ask him why – a hell of a thing to ask in a place like this, because anyway, ultimately, this is Reading – God, as someone once observed, is away on business. Try him in Swindon. Kathryn Joseph doesn’t care though, she gives a spellbinding performance for the old, empty stones, full of sex and blood and laughter. She’s lush.

That just leaves BC Camplight. He’s coming to the end of his rambling, booze-soaked tour for ‘Deportation Blues’ and he’s fired up for some truly bacchanalian revelry tonight. Again, you kind of wonder what the ghosts of the old monks make of it all, propped at the bar, quaffing sack, as BC knocks out great song after great song. Sometimes it sounds like two or three great songs are going on simultaneously, such is the guy’s appetite for hooks and choruses.

The older songs stand out tonight – The shimmering ‘You Should Have Gone to School’ is worthy of Brian Wilson, and his gut-level, soulful falsetto on ‘Just Because I Love You’ gets me like it does every time. ‘Lay Me On The Floor’ touches chaos itself, descending into a formless, yelping jam that spills out in all directions. The band keep everything just this side of a drunken shambles, but I do find myself wishing he’d think of his health and ease off the bottle a bit. There’s only one BC Camplight. He’s a precious wee genius who makes music like no one else and I do hope the next chapter finds him a bit easier in his skin.

There’s not a dry eye in the house for ‘When I Think of My Dog’. The band slope off to leave BC to have his Elton John moment in the spotlight. Or perhaps John Grant is a better comparison, for the way both writers can zero in on the minutiae of their lives and find humour and beauty in the frightening personal and political forces that shape them.

After a blistering version of ‘I’m Desperate’, BC leaves us with ‘Fire in England’. Ever the good immigrant, he describes it as his love-letter to Theresa May. If anything it’s over-generous (“There’s a girl who lives in England / they say she’s a succubus”), but then it was written of the heady days when she was merely the most repressive and authoritarian Home Secretary we’ve ever seen. No one could have predicted the full extent of it. It feels right that already these songs are fading into yesterday, into the Historie of Merrie olde Albion, into the stones. Ever the worrier, I check the news on my phone yet again, while BC dismounts the goodly frame whereupon he has played his sundry entertainments, squeezes a few hands, and heads off into the ruins and on to further adventures.