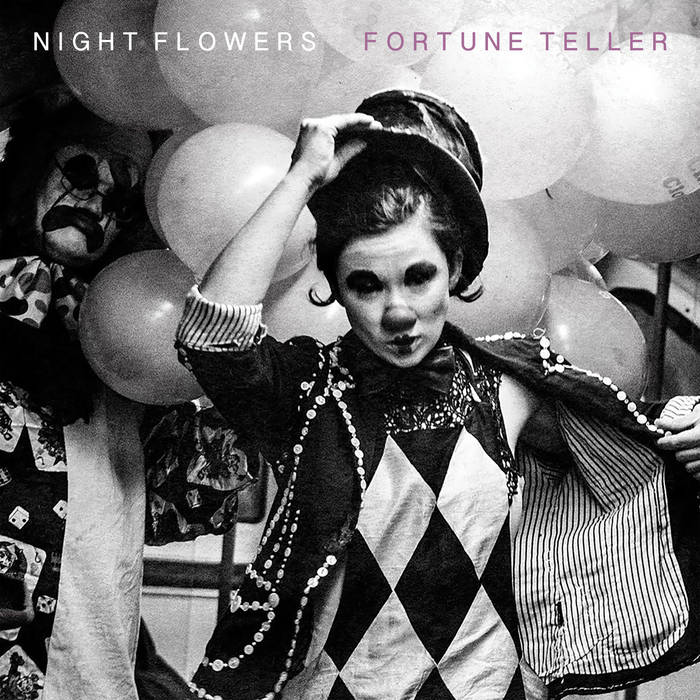 18 months ago, Night Flowers put out their debut album, Wild Notion, a collection of sharp, literate music that skated between dream pop, shoegaze and perhaps just a hint of the more classic rock sound that they explore more fully here on Fortune Teller.

Conceived during sessions for the band’s second album, the eight tracks here started off as live demos and were felt by the group to be a set of songs more reflective of their on-stage sound, and that in fact they would work as an (mini?) album in their own right.

Opener ‘Night Train’ immediately gives credence to that idea, a noticeably chunkier guitar sound complemented by the twin vocals of Sophia Pettit and Greg Ullyart, which are a hallmark of Night Flowers’ sound. There are echoes of Fleetwood Mac and even a nod to Belinda Carlisle in there, and it works majestically as they still manage to sound very much like Night Flowers.

‘Lotta Love’ meanwhile perhaps borrows a smidgeon of the keyboard riff from The Cure‘s ‘Lullaby’ and layers it onto a beautifully melancholy tune, Pettit’s vocals centre stage on this one. The 80s synth motif crops up again on ‘Merry-Go-Round’, a more upbeat offering with even a little hint of country in there.

The wonderfully named Zebedee Budworth handled the initial recordings and also adds a really effective live drum sound to the record which really is an intrinsic part of the aesthetic. The band sound like they are in the room with you, which is hopefully the intention – Fortune Teller manages to be at once intimate and stadium-sized, which is quite a feat.

‘Perfect Storm’ is the only track here which does actually sound a little unfinished – again, the spontaneity is probably what the band were driving for, and there is still a charm to the song, which features only acoustic guitar and vocals. It also acts as a kind of rest point before the listener is thrown already into ‘Side Two’, and the album’s title track which is a little like The Railway Children‘s ‘Every Beat Of The Heart’ slowing down as it collides (perhaps in a railway tunnel!) into a lost track from 10,000 Maniacs. This is a good thing, in case you are wondering.

The set of songs that make up Fortune Teller are concise and focussed with not a sign of over-embellishment or the needless extending of tracks that trips up so many bands. ‘Carry On’ is another piece of tuneful, driving guitar pop, while ‘I’ve Loved You (Such A Long Time)’ absolutely sounds like a single, and one that might have been a hit in the not-too-distant Drake & Sheeran-free past, with its anthemic chorus and keyboard hooks.

‘No Coming Down’ is more Mazzy Star (or even early Mojave 3) than the previously mentioned Mac, a woozy delight bringing the album to a close at a lean 27 minutes. There’s a good chance that you will immediately press ‘play’ and go right back to ‘Night Train’.

Fortune Teller may not be the band’s intended second album proper, but it’s a very strong statement and a powerful document of where Night Flowers are right now.

Fortune Teller is out now on Dirty Bingo Records.