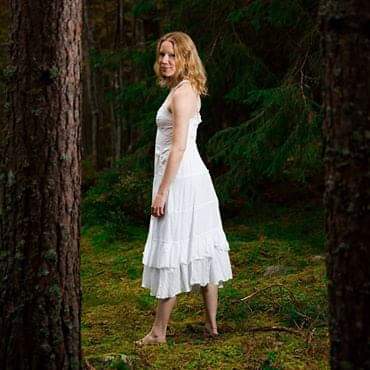 Well, you can’t be more overt than that. This album is technically an EP with only five tracks, but one of them, ‘The Calling’, is a concept piece over 33 minutes long. It is the one-woman environmental movement Åsa Larsson/Resmiranda’s second recording, and the first in English, and is literally for the trees, which is, I assume, why it is only available electronically.  No plastic or cardboard, thank you. (Resmiranda, by the way, is a character from Swedish folklore).

Åsa Larsson, who puts even Greta Thunberg firmly in the shade as a do-er rather than a talker, has gained quite a reputation over the last few years for her environmental concern and efforts, becoming a leading light in the Tree Sisters movement and the Women’s Virtual Choir which she founded, and teaming up with British environmentalist and poet Claire Dubois to pen some of her songs.

This EP shouldn’t really exist. It seems she lost all the recordings to a technical glitch a few months ago but the day was fortunately saved by a tech expert, Tony Senghore, who was able to retrieve most of the material.

Åsa has become quite famous this year, partly for a video of her engaging in the ancient Swedish singing art of ‘kulning’ on a lake to a group of swans, which has over one million hits on YouTube and even more bizarrely out of a TV talent show appearance in which she did the same kulning along with a singing dog.

Which makes her sound like a novelty act but she assuredly isn’t; she’s a skilful musician and writer. She also has a genuinely nice personality, as these extracts from her Facebook page demonstrate:

“For more than two years now, I have been working on my album. I can’t count all the times I have given up on this project. The biggest challenge has been to make peace with my inner critic. But during this long period of time, after every setback, I have heard a whispering voice from inside, saying what has become my mantra: Do it anyway. When my mind has told me it’s an impossible mission, my heart has answered: Do it anyway. When I have felt overwhelmed by negative thoughts, convinced I’m not good enough, my voice doesn’t sound good enough, I don’t have enough knowledge, the answer has been: Do it anyway. When my mind has said, I have three children, a job and no time or energy. My heart has whispered: Do it anyway. And I did. And when I have cried: I really need to rest but if I don’t do this now, it will never be done. My heart has whispered: Rest anyway. And I did”.

There is a great deal of variety in the album. ’Reach for me’ is a light, tuneful piano pop song but bridged by an intriguing flute piece that could be Ian Anderson, or Peter Gabriel on ‘Foxtrot’ or ‘Nursery Cryme’.

‘The Universe’ is a vehicle for an accordion, one of her favoured instruments, to dominate, in fact it almost goes off into a solo at one stage.

Then in ‘Lilith’s Roar’, a song I saw her perform three years ago though it’s had a makeover since then, she shifts away from environmental matters for a moment to social commentary, with a tongue-in-cheek track about Lilith, the wife that Adam took before Eve and who was dismissed from the Garden of Eden because Adam refused to consider her his equal and had a quick word with God about it. Lilith is a euphemism for the banished woman – and indeed for all those – of both sexes – who remain silent in order to avoid opprobrium.

The makeover comes courtesy of a jazzy middle eight that could be performed by Keith Emerson.

‘No more hiding’ is a melodic folk song, again with some interesting instrumental enhancements. It finishes with a similar electronic effect to a song called ‘Sisterhood’ which she wrote a couple of years ago, the best short one she’s laid down in my opinion, and which unfortunately didn’t make the cut here.

And so to ‘The Calling’ which I assume is a reference to her own calling to the business of saving the trees. It’s a collaborative effort with two friends from the house/techno genre, Pelle Grosso and Joachim Sundgren; though my experience of seeing her perform live told me she has the skills of her own to tackle something like this.

I’m not quite sure what to say about it. It’s extraordinary. At 33 minutes it’s more than twice as long as the other tracks put together. It’s as incongruous as a Nightwish opus at the end of a Lewis Capaldi album.

The opening section appears to be a walk through the Amazonian rain forest, to heavy, almost prog-like synths. Then the kulning starts and against this background it is truly ethereal. After that, cue ambient electronica, always with those lurking forest sounds, which later, and pertinently, include the sound of flames. Then the flute returns, hauntingly, followed by a short solo on a xylophone before a synth section that could be out of a sci-fi film.

The second half is dominated by the flute, mixed with animal noises and ominous thunder of the sort that introduces the original ‘Set you free’ by N-Trance but this is no dance track. The music ends completely for the last three minutes, which plays out as the animal noises fight for pre-eminence over the thunder that is closing in.

Åsa Larsson says, “We wanted to create something to rest in, but not to fall asleep to. A piece of music through which you could hear your own inner calling.”

The best way I can summarise this track is to say that if someone invited me to listen to it and told me it was a collaborative piece between say Philip Glass and Anthony Gonzalez (M83) rather than by a complete unknown from a small town in Sweden who lacks confidence in her own ability I would happily have believed them.

I really hope this track at least gets the airing on British radio that it deserves. Something like ‘Late Junction’ if that is still going on Radio 3, or ‘Unclassified’ on the same channel would be perfect.

The only reservation I’ve got about Åsa is that on the high notes of the shorter songs her voice sometimes isn’t strong enough to make the lyrics heard. For example she can’t roar the word roar on the Lilith song. But curing that is really all she has to do.

It seems this was an album of eight songs but when ‘The Calling’ intervened it became four plus that, so another EP will be released later.

‘For the trees’ is available on iTunes, Apple Music, Spotify and Google Play.

1 thought on “Resmiranda – For the Trees (self-released)”