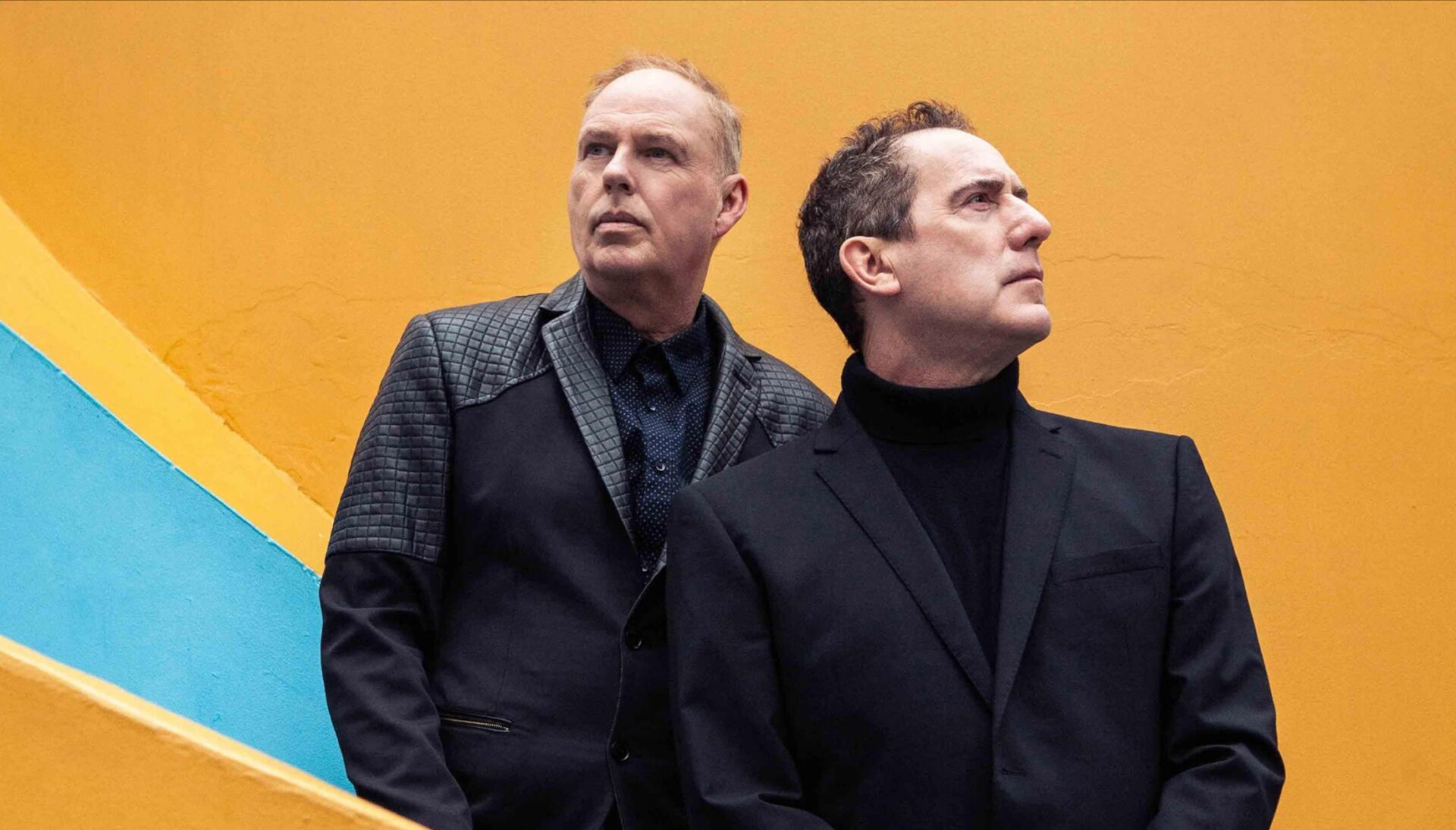 With their new compilation Souvenir marking forty years and forty singles freshly in the shops, Orchestral Manoeuvres In The Dark are in the mood for a celebration, and tonight’s sold out tour brings them to a venue that has almost been like their West Midlands second home over these last few years, the lush Symphony Hall.

First up though is a slightly younger band, MiG 15, which happens to include OMD frontman Andy McCluskey’s son James on bass. A much more guitar-driven band than the headliners, MiG 15 trade in hook-laden tunes in the vein of The Killers or Spector, with singer Adam Bray sharing some of the confidence and humour of the latter band’s singer Fred MacPherson. ‘Dials’ from the recent EP and debut single (and set closer) ‘Bite The Bullet’ are the stand-outs from an impressive set.

OMD have always been masters of the grand entrance, and tonight they excel themselves by taking to the stage to a tailor-made intro containing elements of their own cult classics like ‘Radio Prague’  and ‘ABC Auto-Industry’, while a selection of their impressive sleeve art is built into the accompanying graphics. The band opt for quite a brave opener given that this is ostensibly a ‘greatest hits’ tour, with the stately ‘Stanlow’ (from 1980’s second album Organisation) being an incredibly moving way to start the show.

“There’s gonna be some old ones, some new ones and a couple of weird ones for the hard core” states Andy McCluskey before launching into ‘Isotype’ from 2017’s Punishment of LuxurySo far, so unpredictable, but this changes with a song the band always tend to play third in the set – their first Top 40 hit, ‘Messages’ which has the whole seated crowd on their feet, not to sit down again all evening.  After a spirited ‘Tesla Girls’, McCluskey modestly states that he is putting down his bass as “You’ve already seen the best bass player in our house tonight!”

There’s such a warmth for the band coming from the crowd and when McCluskey welcomes his long-time bandmate Paul Humphreys to centre stage to take over vocal duties for a couple of songs, he is fondly introduced as “Our very own rocket man!” Humphreys delivers a wonderful ‘Forever (Live and Die)’ and a stunning ‘Souvenir’ (the band’s 1981 Number 3 hit after which the new collection was named). After he finishes the latter, a man from the crowd bellows  “Love you Paul” to which Humphreys replies “Love you too mate!” It’s a nice moment that illustrates the fondness felt for the band.

McCluskey re-takes pole position to ‘Dad dance’ through the other two huge hits from 1981’s Architecture & Morality: ‘Joan of Arc’ and its sister song ‘Maid Of Oreans’. Having two back to back Top 5 hits about Joan of Arc within a few months goes some way to demonstrating how the band managed both popularity and to make truly innovative, original music simultaneously.

There’s a nod to their heroes (and elder statesmen of electronic music) Kraftwerk as the next section of the show sees the four members of the band set up in a straight line at the front of the stage (drummer Stuart Kershaw, who has brilliantly deputised for Malcolm Holmes since his health issues a few years back now) coming out from behind his kit to have a well-earned breather as the group spring a real surprise in performing the 39 year old album track ‘Statues’, a song which perfectly encapsulates the melancholy yet warm sounds of their early material. Next is an even older song, the B-side of their first single (‘Almost’) and it’s spellbinding in its minimal beauty.

The party atmosphere continues though as the band re-take their usual places, from first B-side to most recent A-side with ‘Don’t Go’ and an energetic ‘So In Love’ (first single from 1985’s criminally underrated Crush) allows Martin Cooper to demonstrate his considerable saxophone skills. Cooper always seems to be the quiet man of the band, but his input should never be underestimated as he is almost like the group’s secret weapon, despite being there since 1980!

The hits keep coming, a spirited ‘Locomotion’ raises the roof and a euphoric ‘Enola Gay’ closes the set, before the band return to play their big US hit ‘If You Leave’ (powered by its inclusion in the 1986 film Pretty In Pink, it mysteriously stalled outside the Top 40 in the UK), ‘Pandora’s Box’ and finishing with the song that started it all for the band – ‘Electricity’.

OMD leave the stage with a promise to be back soon, and given the energy that they put into this joyful performance, there’s plenty of reason to be optimistic for their next forty years!