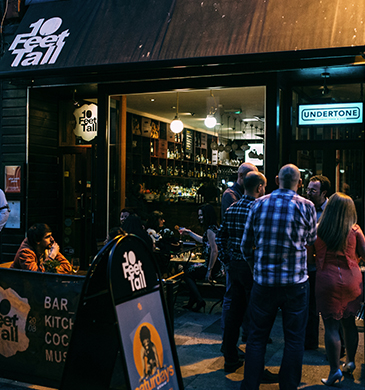 Dempseys, Gwdi Hw, Buffalo Bar, Ten Feet Tall, and Undertone, these names may not mean much to you if you aren’t from Cardiff or have never visited. But for music fans, musicians and promoters in the Welsh capital these are once loved venues that have either closed in recent years or will very soon no longer exist.

Last Friday it was announced that a planning application had been submitted to turn the Ten Feet Tall and Undertone venues on Church street into a restaurant and commercial units. This came as a shock to its staff who said they found out when they read the news on Wales online. Yesterday the management and staff at the venues resigned on mass and in protest at the disgraceful way they had been treated by the venue’s directors.

“As of today, Monday 20th January 2020, the entire team of 10 Feet Tall including the management, bar staff and sound technicians will be resigning due to the actions of our company directors and their advisors. We never wanted to have to do this but we feel that we have no choice.” Said Ten feet tall staff.

The staff argue the directors had decided they no longer want to support live music and want to completely close down the basement venue, called Undertone that has been home to various local punk shows and different genre club nights(like the R&B and hip hop night Bump and Grind) not always catered for elsewhere in the city, in an over decade long life.

The staff finished their statement with: “We love 10 Feet Tall but we feel that we cannot work under our present directors who have refused to have any communication with us regarding how we feel the venue should be run.”

“We really want our venue to thrive as a space for live music and the community and we had so many plans for the venue we wanted to unveil over the coming months but unfortunately, these are now unable to come to fruition.”

A campaign has been set up on facebook called “Save Ten Feet Tall” (like The Facebook page for further updates). You can object to the redevelopment here. The venue asserts currently asserts that it’s still open for business as things stand but the future of the venues and jobs are very uncertain.

Ten Feet Tall and Undertone are just the latest in a long line of venues in Cardiff, that directors and owners have seen fit to seek renovate or bulldoze in the name of commercial considerations and profit.

A massive grassroots fan led campaign entitled “Save Womanby street” the central street for venues in the city was successful back in 2017, with a strategy for the city and a music board being set up in the aftermath, featuring some highly qualified and passionate people. Yet we have yet to see much emerge from this beyond a report with some general reccomendations and the declaration of Cardiff as a “music city”. Last year a similar campaign to save Gwdi Hw led by Daniel Minty saw thousands march to save the venue and the neighbouring buildings from redevelopment, yet they sadly now lie as shells with only the frontages of the buildings on Guildford crescent still remaining.

Ten Feet Tall is also a venue I know well, as a promoter I put on a packed out show by Scottish band Frightened Rabbit their back in 2008 when the venue had just opened. With a vintage look and three floors from the Undertone basement a middle cocktail bar area and a top-level venue with a stage for shows it has catered for all types of nights out and music tastes. Some have questioned the ownerships lack of communication with management before.

With Dempseys aka Four Bars, last year Gwdi Hw and now (potentially) Ten Feet Tall and Undertone shutting their doors in Cardiff in recent years the places where independent promoters and different club nights can take place are increasingly very thin on the ground. Grassroots venues, live music and independent venues are under threat across the country (just last week there were rumours that the Monarch in London was closing for live music) with these premises facing many challenges on many fronts. Running a live venue is a labour of love and very difficult in the environment of austerity, a rise in redevelopment and forthcoming Brexit, with independent venue week coming up they need all the help and support they can get. There is a limited audience at times for indepdent shows in Cardiff so venues need to work together not to split the audience with gig clashes but in partnership with promoters and musicians. We urge you to support your local venues these really are the places where new talent emerges and gets its chance!

Something needs to be done to safeguard the venues we have in Cardiff and support another venue of this kind because whilst the Moon Club, Fuel and Clwb Ifor Bach do a great job as regular independent medium sized venues and there are others out of town(The Globe, Tramshed, The Gate). There is still clearly a need from fans and independent promoters for different options for independent shows in the city centre. The new music board must react to this news and work with the council and interested parties to see what can be done to make sure we have enough provision for live music and events in the city. So that we can react to these threats to live venues more quickly. Maybe a group needs to come together to support one more central venue of this kind?

The gentrification (also a curse to independent venues and spaces in major cities like London and Manchester) of Cardiff town centre continues a pace with the rise of high-rise private student accommodation and souless flats. The owners and directors of these buildings talk about “balance” but where’s the balance when they want to turn their spaces into another office block or restaurant, when there’s already a huge preponderance of these in Cardiff city centre already?! Music and culture has always been at the heart of what brings Cardiff city centre to life, part of what makes it unique giving an opportunity for young people to make music, scenes a opportunity to thrive and fans the chance to experience the thrill of live music in the flesh, we need to protect and support it before it’s too late as the rush for profit strips it away.

2 thoughts on “OPINION: Can Cardiff call itself a “music city” if it doesn’t protect its venues?”