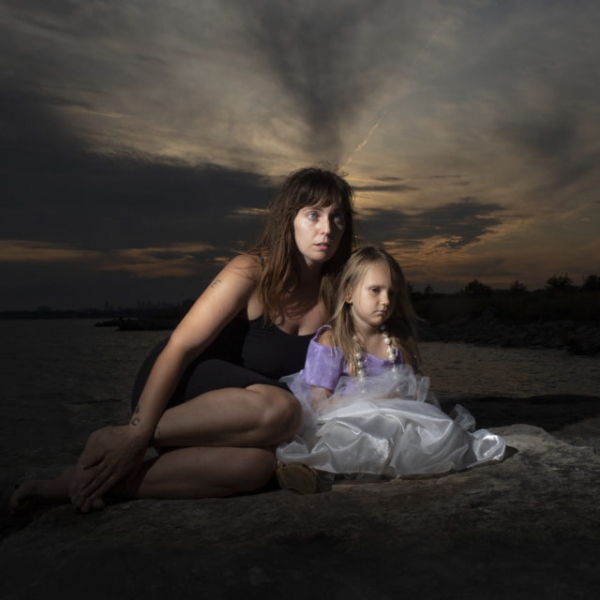 Hindsight. We experience from time to time. Use it in the right way and it can be a powerfully beneficial tool at making us evolve and improve our well-being. Under her prolific project U.S Girls, Toronto resident Meghan Remy attempts to capture the concept of hindsight through the composition, production choices and lyrics of her latest record Heavy Light. Her eight album is sliced into four sections by spoken word interludes; a collage of overlapping male and female voices answering questions about their childhood. Similar to the set of therapy sessions that are heard on Jenny Hval’s 2019 album The Practice of Love. You can choose to focus on one account or listen as a whole. It’s worth noting that the album cover features Meghan Remy with a little girl whom could be representing her childhood identity.

The first interlude on Heavy Light – named after a Franz Kafka adage – is ‘Advice to My Teenage Self’ and it strongly encapsulates the idea of hindsight. Answers to the question of what guidance you would give to your adolescent self feel realistic and genuine as they range from the motivational: “I think you’re doing your best, so let it go and enjoy what you can for now because things will get pretty freaky soon” to the clueless: “I don’t know. I don’t think I have any good advice to give myself, I’m still trying to figure stuff out”. These voices aren’t randomly selected either. These are the voices of the twenty musicians who perform with Meghan Remy throughout the LP, many of which are backing vocalists. For so long U.S Girls has felt like a solo project but this time she sounds the lead singer of a gospel-like harmonious choir. This shared confessional experience of personal hindsight was recorded as a live session at Hotel 2 Tango recording Studio, a space that’s popular with Canada-based artists.

Within the 20-piece band is saxophonist Jake Clemons – known as being a member of Bruce Springsteen’s backing band for the last eight years – who performs a dramatic saxophone solo on Heavy Light’s lead single and pre-first interlude ‘Overtime’. The backing singers continuously repeat the word “overtime” on the bluesy track as Remy accounts the story of a man who’s fatal alcohol addiction was funded by secret money he saved through overtime work. Unbeknownst to his partner. The singers also effectively split the word up into two (to become over time) to reflect the long period of self-destruction and relationship deceit. Painstaking hindsight is reflected when Meghan Remy sings: “I was unaware of my comedy. I thought the math could not lie. But what a mistake it cost you, you laugh. Now you’re six feet underground. And I feel nothing but a clown.”

Hindsight is also reflected in her song choices. ‘Overtime’ is one of three tracks which has been reworked from a previous album from U.S Girls. The aforementioned was originally recorded for her 2013 EP Free Advice Column – it’s not the first time she has revisit tracks as another one from that EP ‘Incidental Boogie’ was also redone on her previous record In A Poem Unlimited. Furthermore, ‘State House (It’s a Man’s World)’ revisits a U.S Girls track from 2013, by utilising the new backing choir to give it an added oomph and make it less disorientating. Album closer ‘Red Ford Radio’ which sounds like a haunting tale of abuse and suffocating torture inside an automobile was originally included on the album Go Grey from 10 years ago. Seemingly representing a hindsight to her own self a decade ago and perhaps a feeling of closure. It replaces a foggy drum machine and fuzzy low-fi vocals with a clearer vocal and a distant gong-like drum. Almost ritualistic.

The second interlude ‘The Most Hurtful Thing’ contains effective responses to Meghan Remy’s question that can resonate with a diverse mix of listeners. From body weight shaming to rejection to bad parenting to religious controlling to mental health, hearing these different answers makes this album feel multicultural. Something that’s also backed by the music. The slightly addictive multi-lingual song ‘Yet It Moves/Y Se Mueve’ is purposely half in English and half in Spanish as the song is about divisions between the cultures that primarily use these languages and is a mix of 70’s disco and bossa nova. ‘Born To Lose’ – which contains lyrics borrowed from a song of the same name by the relatively unknown Jack Name – has the backing vocalists perform in a ecclesiastical manner over the top of marimbas (there’s a wonderful solo moment), shuffling percussion and bangos. Instruments also heard alongside marching drums and güiro on the tropical ‘Denise Don’t Wait!’. Remy is known for creating characters in her songs but this song sounds particular emotional and personal, as if her songwriting is heading in a new direction.

If the first interlude question was a little open-ended and the second traumatic, the third is more precise and light-hearted as Meghan Remy asked her singers about the colour of their childhood bedrooms, with some answers being strangely detailed than others. Before this interlude is ‘Woodstock 99′, a piano song that borrows lyrics from the classic Jimmy Webb ‘MacArthur Park’ and pairs them with a discussion on the controversial Woodstock concert of 1999 which was held in New York and was ruined by violence and sexual assault cases. On the other side of the interlude is the equally interesting ‘The Quiver To The Bomb’ , a LCD Soundsystem-meets-David Bowie space rock anthem also studying a historical past, with an interest in the evolution of weaponry.

The only disappointing aspect of ‘Heavy Light’ is that tracks are perhaps too short individually but taking the album as whole it’s another thought-provoking, stylistically diverse and intellectual entry into the U.S Girls catalogue. Why it’s hard to get bored with a U.S girls album and the large support of voices and slightly more personal lyrics make it even more unique and entertaining. When Meghan Remy looks back in hindsight she’ll be proud of this creation.