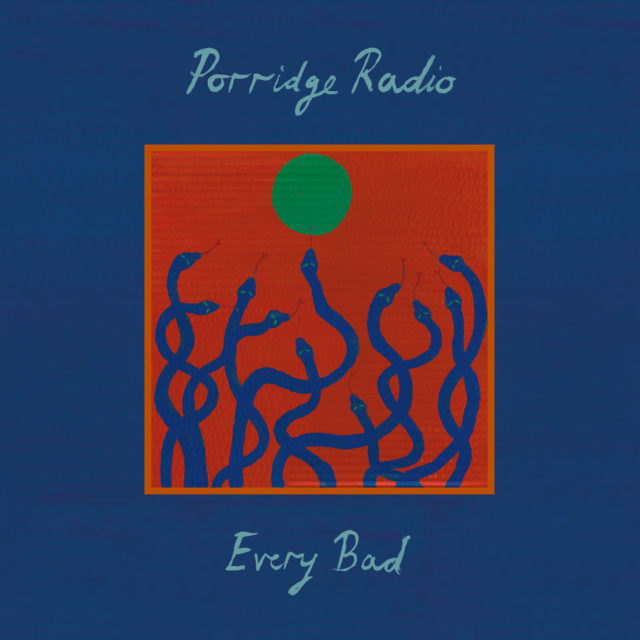 Initially, you hear the name, Porridge Radio, and you see some beige gruel being emptied out of a cereal bowl onto a DAB and you watch as it drips and slides down the speaker and milky bubbles pop in the metal holes and there’s a smell of the morning before school.

Let Every Bad drip into your psyche though, and you will simultaneously see an idyllic Blur – There’s – No – Other – Way kitchen breakfast table with a pot of tea, a toast rack, jam, marmalade, plates and knives and a box of oats sitting by the wireless, and then suddenly a nightmare sequence, flashing neon lights, grotesque images, anxiety, pain, longing, hurt and grief. Dana Margolin is pouring every inch of herself into this.

“I’m bored to death, let’s argue” is a goad. A prod. Provocation to start a fight, to begin the end. ‘Born Confused’ concludes with “thank you for leaving me / thank you for making me happy” presumably hoping for the death of a relationship and happy, or at least telling themselves they’re happy when it’s over.

‘Sweet’ is devastating. Lyrically clever, witty and playful, the beautifully observed lines “my mum gave me this pen/she said it lights up when you press it/and are you still so depressed and I like it that you need me”, an awkward situation where your Mum gives you something mundane but they find amusing just for a excuse to talk to you and ask if you’re doing ok and subtly say that you can tell her everything. Coupled with the incredible din akin to a guitar and amp being thrown down a flight of stairs after each verse. Simply stunning.

In places there is an element of stream of consciousness, that lyrics have been scrawled out in a rage, in a drunken fury, with tear stained pillow, regret emerging from below the surface and then melancholy. There is serious loss here. Exquisite pain, torture of oneself to the point of losing one’s mind.

‘Circling’ epitomises this desperate merry-go-round, a magic roundabout of heartache and despair.

If there’s an envelope, a boundary, a musical taboo to be pushed or broken then they will. A cyclical line or loop repeated and repeated to what should be breaking point but then on again, such as the end of ‘Lilac’. “I don’t want to get bitter/I want us to get better/I want us to be kinder to ourselves and to each other” pushes on and on, to start with it is gentle and pleading but as it builds and spins out of control and becomes a glorious crescendo it is berating; chastising those who hate themselves and attack others because of it. A mantra for these difficult and increasingly uncertain times as we as a species show our true selves and less of what we should be doing. Are we naturally good and selfless or does it actually take effort and a decent moral compass?

Dana’s influences seem so disparate they could include Siouxsie Sioux, Florence Welch, Jules Jackson from Big Moon, Brian Molko, Giant Drag’s Annie Hardy and a million in-between and intertwined but forever sounding unique. Or none of the above.

There is something intangible, the finger remains waving in the air, awaiting that indescribable feeling, transcendental emotion to appear to put it on. However, there it will stay, hovering, as we can’t always articulate.

Just listen and feel it.