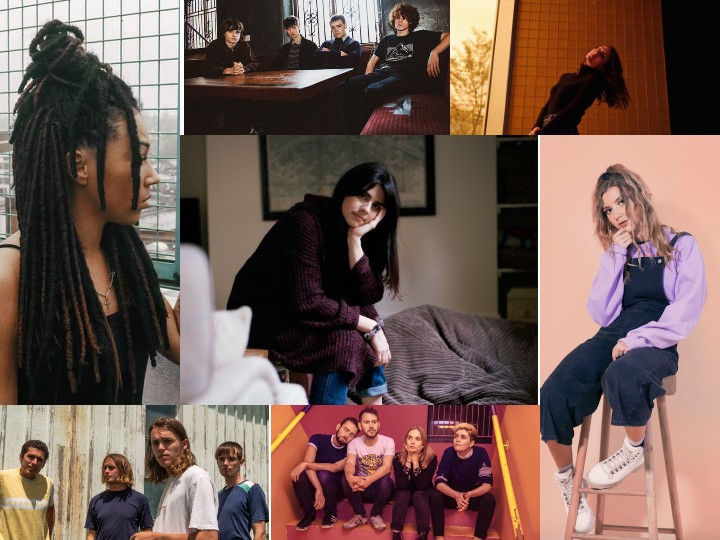 Who? The Lounge Society

“We went through the track and there was a real energy in the room, it was like being at a gig which is exactly what this track needed. Generation Game means a lot to all of us, and we feel it’s an ideal introduction to us as a band. To us the lyrics reflect what we’re all about – shedding light on topics and events we feel are criminally ignored – and for it to be our very first offering to the world (especially through Speedy) really helps get that across. Once we’d finished the take we all stopped dead and looked at each other (and Dan) and he just said ‘that’s it, that’s the one’. I think we were all a bit shocked but the energy was there on the recording and we completely trusted him!’

Why we love it? Brooding, visceral, urgent and explosive. This track gathers from ruminative and paranoid into an explosive flange squalled crescendo and back into brittle reflection. An arty, brutal diatribe about an unequal society and a left behind younger generation, unmissable.(Bill Cummings)

What?I’m Starting To Think You Don’t Even Want To Go To Space

What they say? About the single Lily said, “I was inspired to write this song by watching someone who keeps loudly proclaiming they’re going to save humanity and change the world constantly make excuses for why they haven’t got round to it. It’s largely about emotional labour and rockets and I’m dead proud of it.”

Why we love it? Fightmilk have this enviable ability to sound like a cross between Catatonia, Hefner and everything great about the underground 90’s scene, whilst being fresh and invigorating.
‘I’m Starting To Think You Don’t Even Want To Go To Space’ is a glorious slab of grunge guitar, with pop at its core that harks back to happier times and hopes for a better future. Maybe on a different planet.(Jim Auton)

“Outwards Crying is about my urge to leave my hometown (Dunedin, NZ) and change my surroundings.Outwards crying is a nature song!

For the video we wanted a gritty and off kilter accompaniment to the song, and it turned out to be shooting farm animals and old buildings around Dunedin, which I can’t explain why but seems fitting. I feel like this is our most heavy song on the upcoming album, not in terms of instrumentation, but more how confronting it is emotionally.”

Why we love it? /A wistful slice of psych pop, smothered in hazy catchy guitars and threaded with hooky refrains. The sound of standing back and capturing the majesty of nature. (BC)

What they say? “LUV U is about the frustrating feeling of someone not allowing you to tell them you love them, even though you know you do and you know they feel the same way – they’re in denial, not ready or perhaps even too scared to be vulnerable”.

What they say? Evocative, refreshing and meditative. A subtle backdrop of beats, is splashed with purpl’s wistful, crisp and tender vocals. Minimal and insidious, this track is about the frustration of not being able to express how much you live someone. It wraps itself gradually around your heart.(BC)

What they say? “Our guide (whose voice features on the track) was a Shaman who told us that some of the hills we could see were actually hidden pyramids and that there remained many such undiscovered places. Using modern technology in 2018/19 it was discovered that this is in fact true and there are hundreds of unearthed Mayan sites in the region.”

Why we love it? A patchwork of samples and beats, this trippy hypnotic come down anthem has a 90s throwback quality. But undeniably an earworm of spiritual proportions.(BC)

Why we love it?  Deyah is set to release her new Care City EP on April 10th, her new single/video ‘Venthouse Suite’ is out now.

The video to her new single, ‘Venthouse Suite’ addresses the torment of being judged and mistreated by others, together finding forgiveness in anguish and despair.

Why we love it? Lifted from her forthcoming new EP, Deyah hypnotises again with a soulful track sewn with exquisite soul and old school hip hop bars, this heavy murky atmosphere is introspective, deep and self exploration. Haunting and exquisite.(BC)

What they say;
“I wrote the Bad Art EP as I was emerging from the lowest point of my life. Someone suggested I should write about the experience, which I scoffed at. I hated the whole “tortured artist” trope, because I think most of it just ends up being… bad art. Then I wrote all four songs that are on the EP in one day, so I suppose they were right.”

“I released Bed Head with a daft little home music video you might enjoy. It’s cosy quarantine music if I ever heard any.”

Why we love it? Reflective and tender, this ode to lying in. Is remarkably prescient given many of us are now stuck inside self isolating. Deceptive and melancholic, with a hint of double meaning. The weight of laid back strums against evocative refrains is like a lullaby gently rocking you off to sleep.(BC)

Hannah Georgas debuts a new, original single and video titled, “That Emotion” today. The song is produced by multi-instrumentalist and producer Aaron Dessner, best known as a founding member of Grammy Award-winning band The National. It is the first sneak-peek from Georgas’ upcoming record and first release on a pair of new labels — Toronto-based Arts & Crafts for Canada and, in the rest of the world, Brassland, an imprint co-founded by Aaron & Bryce Dessner.  She talks about working with Aaron as a process that helped her find a new warmth and depth, and brought out “the truth in my voice.”

Why we love it? Subtle and textured, wisps of guitar decorate this gently lapping track invested with Georgas reflective, wistful and gorgeous vocal tone. Her refrains are a shaft of light in these dark days.(BC)