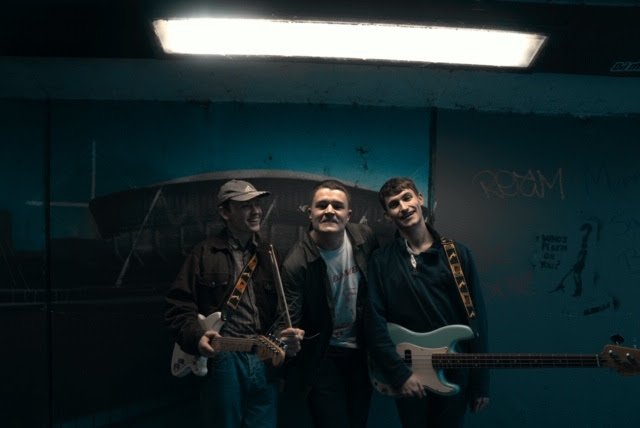 Cardiff based North Walian band Papur Wal have been described as “frenetic riffed beach pop”, what “Dinosaur Jr rehearsing next door to The Beach Boys would sound like”.

The second single from their forthcoming debut album on the ever reliable Libertino records, is produced by Kris Jenkins (Cate Le Bon, SFA, Gruff Rhys) Papur Wal take us on a journey through fear of flying and death all drenched in West cost harmonies and slacker irreverent cool.

Today they’ve compiled a playlist for us for the lockdown, listen below.

El Goodo – As you said your so longs

We’ve only recently discovered this band, a recommendation from Gruff our label manager. A really cool song title that you wish you’d thought of, the arrangment is so good, there’s a reason for every instrument in the mix, and the mix is so balanced. Really Big Star-y as the name suggests, which is a great start in our book.

Saw them in Cardiff recently, this is off their latest AA-side. Some really simple yet amazing lyrics that hit home in this song “I’m a lot like my Father was / I’m always some other place” and “Well let me buy you a round, man / So I can feel like your friend / you know it’s been too long, man / what’s going on with your band?”.

Underrated by so many people, his solo stuff is just insane. This is such a perfect two and a half minute pop song. The chorus also reminds me of the theme tune to seminal Welsh Comedy show “C’mon Midffîld”. We should be celebrating this guy’s existence in Wales.

Love this album, even if parts are a challenging listen. This is the complete opposite, and it’s insane how he can just brush 5 amazing songs under the carpet by putting them in a medley. I’ve been listening to loads of different live versions of this medley on YouTube and they’re all mind-blowing. Todd is a genius who everyone should listen to. We have a song on the album we’re currently working on that we want to sound like this.

Ariel Pink – Round and Round

I kind of see him as the modern day Todd. Really ambitious and cool stuff full of interesting sounds, progressions and melodies. The chorus melody and vocal arrangement is soooo good, especially the second time around with just the drums playing.

One of our biggest influences. A classic TFC song, huge chorus, nice story about love. I believe this is also one of ex-Liverpool and Real Madrid footballer, Xabi Alonso’s favourite songs which makes him all the more cooler.

Beautiful duet between brother and sister. Euros’s sister Megan is also the violin player. There’s a video on YouTube of this song with (I think) Spanish kid’s cartoon El Tigre, El Oso y los demas (the tiger, the bear and others).

Such a banger. I remember showing this to the boys on the way back home (North Wales) from a gig in Wrexham once, and we all loved it. Not really listened to much of his solo stuff, but there are a couple of good songs on this album, and this one really stands out.

We recently met these guys, and really get on with them and enjoy their music. This song is probably our favourite song of the year so far, and came out on the same day as our single ‘Meddwl am Hi’ which we were really pissed off about.

Steely Dan – Only a Fool Would Say That

Finishing off with Steely Dan. Guto and Gwion were really into Steely Dan when we met in University and they’ve remained a staple in our music landscapes since then. This was the album we’d always listen to, and this is maybe a slightly underappreaciated track. One of the best bands ever in our opinion.