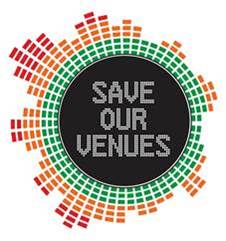 Music Venue Trust has announced #saveourvenues, a new national campaign to save hundreds of grassroots music venues at imminent risk of being closed down – permanently.

Without these independent venues the live music scene in the UK will die. These grassroots venues play a crucial role in the development of British music, nurturing local talent, providing a platform for artists to build their careers and develop their music and their performance skills. These venues also play a vital role in the cultural and economic vibrancy of any village, town or city.

Currently 556 venues are at risk including The Sugarmill in Stoke-on-Trent. “We’re extremely proud to be a grassroots music venue. These spaces are pipelines for talent and absolute lifelines for the communities they serve and the talents therein. We cannot allow them to be consigned to the past. UK music culture as we know it will simply not exist without these spaces, so it is vital to protect them” said Danni Brownsill, the venue’s chief booker and promoter.

Artists will be performing ‘at home’ gigs in support of their local venues, chosen from a list of venues currently in crisis which can be found at the campaign website  www.saveourvenues.co.uk.Each venue will have their own fundraising page with a clear target of the funds it needs to raise to stay afloat throughout this difficult period. Once a target is reached any excess revenue will go to the central #saveourvenuesfund to help the wider grassroots music venue community.

How can music fans get involved?

Donate to a specific venue’s fundraising page by clicking this link www.saveourvenues.co.uk to see a list of local venues that urgently need help.

Watch ‘at home’ shows by artists supporting the #saveourvenues campaign.

One of the main drivers of this initiative is the musician Frank Turner whose recent series of ‘Independent Venue Love’ shows for local venues Nambucca (London), The Joiners (Southampton) the Railway Inn (Winchester) and The Forum (Tunbridge Wells) raised thousands of pounds and provided a major inspiration for this campaign.

Frank Turner said, “The UK live music industry is staring into the abyss right now. I’m not able to save the whole thing on my own, but I decided to do a series of livestream shows to raise money for specific independent venues that I know and love, and that are in serious risk of disappearing right now. The success of these shows demonstrated the love that exists between music fans and their favourite grassroots music venues so the #saveourvenues campaign is a brilliant way of building on that and hopefully giving artists and music fans a chance to get involved and play a big part in helping them survive.”

One venue saved from closure by Frank’s fundraising gigs is Tunbridge Wells Forum.  Co-founder Jason Dormon said “Frank Turner has always championed the grassroots sector, having grown up and learnt his craft in these venues. His generosity and commitment is truly admirable, he inspires live music fans to come together and unite in raising awareness and funds for the UK’s grassroots music venues. We were totally overwhelmed and heartened by Frank’s help and the support and generosity of the local community.”

Music Venue Trust’s CEO Mark Davyd said, “Without the support of music fans and artists literally hundreds of the UK’s grassroots music venues could go out of business, never to return, in the coming months. Please help to save every single grassroots music venue in the UK so that it can reopen after this crisis and continue to be a home to our musicians and our communities.”