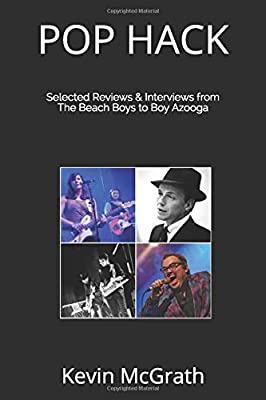 For episode three of Cymru Am Bop! a new Welsh music podcast, Bill Cummings talks to Welsh music writer Kevin McGrath about his new book Pop Hack, his favourite music and some of the local acts he feels are underappreciated. Listen below.

As a staff writer with Wales Arts Review, Kevin McGrath pounded the beat of the South Wales music scene for the best part of a decade, reporting back lovingly on a coterie of unsigned and unsung local musicians who just happened to be making some of the best folk/pop records heard in Britain in a generation. In addition to documenting the work of singer-songwriters’ Dan Bettridge, Aled Rheon, Armstrong, Jodie Marie and Georgia Fearn, McGrath was entrenched in the Welsh Indie underground, on hand to witness the rise of Pretty Vicious and Boy Azooga as they secured high profile record deals and to champion the perennial struggle of ‘Cymrucana’ combo Climbing Trees and Indie-noir pioneers Silent Forum as they sought to punch a Presley-sized hole in the pop stratosphere. The second half of Pop Hack shifts the focus beyond the Welsh border, collecting together some of McGrath’s most illuminating and wide-ranging pieces, incorporating his running coverage of cult Americana outfit Richmond Fontaine and living legend Van Morrison, as well as reviews of Dexy’s Midnight Runners, St. Paul and the Broken Bones, Billy Bragg, Declan McKenna, Michael Bublé, the Nightingales and many more. Interspersed with these reviews is a series of in-depth interviews, including fascinating conversations with punk singer/political activist Victoria Ruiz, Arizona’s rising country/folk star Courtney Marie Andrews and the internationally acclaimed writer and musician Willy Vlautin. Kevin McGrath has also written for Plugged In, PopMatters, From the Margins, Buzz Magazine, New Sound Wales, BBC Wales Horizons and Mystic Avenue. He is currently the author of the redsoapbox arts blog and a juror for the Welsh Music Prize. His book is available here: