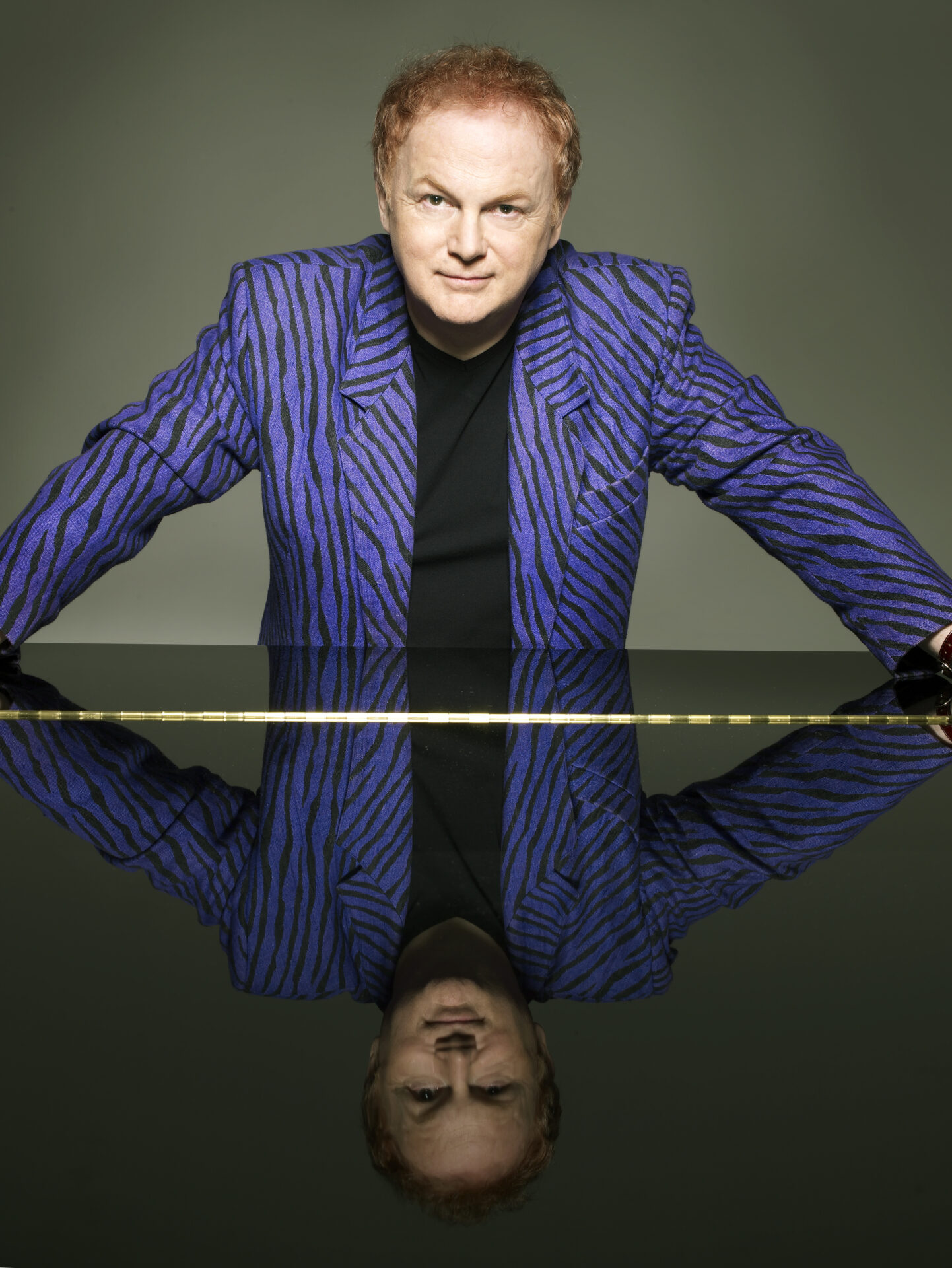 As I told Mike Batt on Twitter a couple of days later, the songwriter extraordinaire was just TOO interesting during our 45 minute telephone conversation last week, and as a result, I had to split the interview into two parts. So here’s part two…

God Is In The TV: Before you ‘hit the big time’, you recorded a version of The Beatles’ ‘Your Mother Should Know‘, which is an interesting inclusion. Did you ever get any feedback from the band themselves?

MB: I played it to both Paul and George, at separate times. I never played it to John…I’m not sure whether Yoko would have liked it…but then again, modern mash-ups are the thing nowadays, so who knows? I know Paul liked it, and I think George did too. That was such a sad day when George died, he was a lovely, lovely man, and I’d say he was as good a writer as any of them. I had a go at writing with George – he played this great solo with a bottleneck guitar on ‘The Hunting Of The Snark‘. I remember when we were getting excited about working with each other, we got chummy and we were on the phone. I said “Right, when are we going to write this masterpiece then?” and he said “Well actually Mike, something crap will do to start with!” And he’s absolutely right – that would be my advice to anyone just starting out writing something, whether it be a song, or a book, or whatever – just write something, anything. It doesn’t matter if it’s an absolute piece of crap. Just write it. Because…let’s say for example you want to write a book about a witch, well, you might write a first page that is utter bilge, but then the next page might be slightly better, and once you’ve got this idea going, the rest of the book might be incredible! And then you can always go back to the first part, the bit that was utter crap, and rewrite it, after you’ve finished!

Well that sounds like great advice. Maybe I’ll finish that book I’m writing after all! And you’ve had some amazing collaborators over the years. Do you have a favourite?

MB: Well I don’t know about ‘favourites’, as I wouldn’t want to put any above the others – they’re all special in their own way, but in terms of being memorable, some of the non-musician ones are certainly up there – Sir John Gielgud, for instance, as it was so unexpected. We just hired him to do a voiceover. He came in, and there he was with his cravat on, I had pie and peas with him in the canteen, he called me “Dear boy” (laughs at the memory), and astonishingly, he took direction from me, because I was just this young lad…it was just so surreal! And the worst ones, on the other hand, are the ones that throw tantrums and kick chairs over.

I figured not. Now, your tunes, going back to even The Wombles with ‘Minuetto Allegretto‘ and before that, have often had a kind of classical leaning. What informed that side of your work?

MB: You remember those papers that used to come through the door where you could buy bulbs for the garden, and carpet cleaners and things like that? Well they used to have an advert for 4 EPs on there sometimes – classical ones – that you didn’t have to pay anything for, although it ended up costing me a LOT of money because I spent so much on classical music after that. And from the moment I first heard Schubert‘s 9th symphony, that was it for me – I learnt every bit of it. My parents went nuts – we lived in Bradford, modestly, and I used to put all the chairs in sections on top of the tables and pretend I was conducting an orchestra! I was a bit coy later on, when I kind of ‘pushed myself in’ to conducting an orchestra, because the difference is, you can get away with making mistakes when you’re younger, but if you make a mistake conducting when you’re older, you end up looking a complete prat!

And you were involved in writing part of the main song from The Phantom Of The Opera too, weren’t you? You wrote some of the lyrics, right?

MB: Let’s just…leave it hazy as to what I actually wrote on that. I was given the basis of a tune by Andrew Lloyd Webber, and it was a tune that had been written for another musical – Trevor Nunn said it was a tune from Aspects Of Love that hadn’t been used, so I kind of adapted that. I certainly feel proud, having watched what a huge impact that musical has had across the world, to have been a part of it anyway.

More recently, you discovered Katie Melua. Can you describe the moment where you thought “This is it! I have to manage this girl!“?

MB: It was actually a very ordinary moment. We put this notice up saying we were auditioning and we had about 30 musicians to see. Polly Scattergood was the first one in, and then Katie, who was Polly’s best friend, was second. All I wrote down in my notes was “sang own song“, which I thought was sort of a disadvantage in some ways. So I said “Let’s try something else” and went to the piano. She sang ‘September Song‘, and I said “Let’s try some jazzy embellishment. ” She wanted me to suggest something but I was going “No, I want YOU to come up with it“, you know, this is not ‘Embellishment #365 of How To Win X-Factor’. So she did, and if there was a moment when I knew I wanted to work with her, it was probably that. I put all my chips on the red on the roulette table with Katie (metaphorically), but then when we recorded like an EPK (electronic press kit) in the drawing room, which we used as a studio, and she had her hair and her make up done, the minute I looked down the barrel of that camera and saw what came out of that session, I knew. I mean, I know looks SHOULDN’T make a difference, but unfortunately, they do – it’s just the way it is. Let’s face it, if you have two good actors to choose from, one of them is Tom Cruise and the other one…ISN’T Tom Cruise, well, you’re going to choose Tom Cruise, aren’t you? Katie already had the personality, so this was the icing on the cake really.

So we did ‘The Closest Thing To Crazy‘, which I’d made for Sony Germany some years before that, but they wouldn’t release it in the UK for some reason. So I was very gratified when Katie had a huge hit with it. One thing I DO want to say about Katie though – over the ten years that I worked with her, throughout all the effort I put in to try and make her a success, she absolutely gave as much back to me as I gave her, so anybody who tries to say “Oh she wouldn’t have made it without you” is completely wrong.

I don’t doubt that. Now, ‘Soldier’s Song‘, that’s such a towering beast of a song that I feel like it must have taken you months to write it…

MB: Quite the opposite actually, it was a really quick one! I was about to go away and leave the country for a couple of years – I’d bought this big yacht, which was the nearest thing I ever did to behaving like a pop star! – when The Hollies asked me to do three songs, in the early eighties. So I wrote ‘If The Lights Go Out‘, ‘Soldier’s Song‘ and ‘I Can’t Lie No More‘, all of which I recorded, and it became a regular part of my repertoire, ‘Soldier’s Song‘. I thought “What shall I write about?” and so I pretended I’d just been hired to write a movie score, so I thought “What could it be about? The battle of Waterloo!” so I thought “I know, we’ll have a soldier who’ll meet someone on the way, a woman who shows him the ropes – a romantic encounter” and I just made the whole story up and wrote the song in a day! When I played it to the band, they just said “Let’s do it!” and I hadn’t even finished the lyrics to the last verse, so I actually did that while I was producing Allan Clarke putting the vocals on the rest of the song in the studio! The adrenaline made me write!

So if you could pinpoint your proudest moment, above all?

MB: I think that would have to be the moment that ‘Bright Eyes‘ hit number one, given the circumstances I mentioned before. It felt like a triumph and a vindication, and I’m so glad I did it.