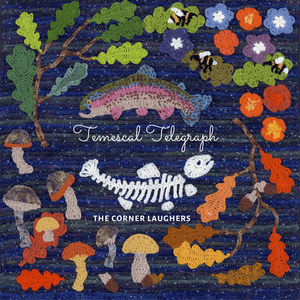 Well, what a confusing record. A confusing record for confusing times. By that metric, Temescal Telegraph by The Corner Laughers may be the most on-point album on the market today. If you’re in the market for some music that veers from the almost implausibly beautiful to the flat out confounding, this is the collection for you.

This ten-song effort by the California four-piece has one of the greatest summer tunes of recent years. In a shimmering, West-Coast folk style, ‘Wren In The Rain‘ positively glistens in the sunshine. Multi-tracked vocals from Karla Kane, picked and blissed-out guitars and the vibe of a warm breeze kissing your ears combine to magical effect. In these troubling times, it really transports to a beach far away from all this chaos. A much-abused term but it really is an instant classic.

There is a caveat. There is almost always a caveat but here it’s a thumping great beast of one. Throughout this rare beauty, I had an overwhelming concern. “Don’t do anything mental. Please, do not do anything mental“. Because the tendency to throw everything but the kitchen sink at songs is a recurring theme across this record. This may be a chilled, folk-rock album, but, as soon as you’re settling into some twee but lovely Fleetwood Mac-style track, at the folkier end of their voluminous canon, a whacking great guitar solo comes crashing in from stage left. As another song lilts along deftly and makes one think of an afternoon cocktail in the garden, the drummer decides it’s time for an energetic solo and goes all Animal from the Muppets on you. Chuck the odd spatter of out of place honky-tonk piano – a la Jools Holland – and you get the picture. Temescal Telegraph is a masterclass in joy and frustration. It really does sound like it was recorded live on Jools Holland with everyone having a go. You can almost see the camera panning around the studio waking up everyone within three feet of a musical instrument to assault.

It really is a great shame. There are marvellous moments and songs here. ‘Sisters Of The Pollen‘ may sound remarkably like The Bangles, but, so what? They were great and so is it. ‘The Calculating Boy‘ is brisk and light on its feet and fair gallops along. With more straightforward, though still thumping, drums to boot. Throughout the album, elegiac passages like the best parts of Simon and Garfunkel drift through the speakers…then a jarringly out of place whistle will ambush you. A countryish twang starts to convince that maybe that frequently anodyne genre has some merit, then the drummer wakes up again and goes at it. Alarmingly though not necessarily unamusingly. We may need amusement in this tumult, but this is not the record for it.

A great record is in here. A really great one. It badly needs an editor. The comparatively lowly score reflects this, unfortunately.