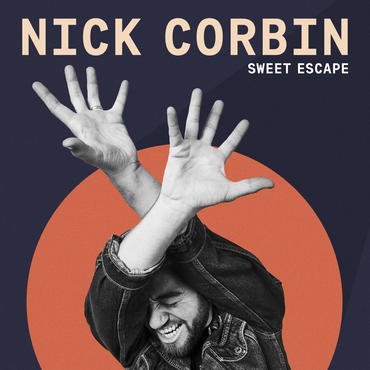 Alright, so having donned my smoking jacket, wide-collared shirt and trousers that are too big for 2 of us, let alone just myself, then Nick Corbin‘s album chimes in. The lead track here is ‘Sweet Escape‘, which sounds almost as if treacle is being fed through my speakers, heavily laden with liquorice tobacco, the kind I remember buying as a kid. The artist in question has been described as a “Mod Mike Skinner“, moreover comparisons have been made between Paul Weller and Tom Misch, something I’m sure this artist may find flattering, but to be himself maybe far more deserving? I can hear similarities, but no one artist fully exemplifies what I can hear Tom performing. Go back to the early-mid Seventies and what is coming through is the sound of Northern Soul, a whole heady mix of influences this artist is evoking. Corbin is no stranger to the world of music and although this might be his debut solo affair, he has been the vocalist with Acid Jazz quintet New Street Adventure. This band had been active throughout the 00s, having released 2 full-length albums. The numbers NSA produced seemed a little brighter in their composure, whereas those songs available on Sweet Escape seem deeper and perhaps more introspective. Certainly, the artist has grown with age, taking the experience of this in both his songwriting and musical presentation. These are glorious moments both lyrically and musically, taking big orchestral moments and squeezing these into what is essentially a club sound, but still remaining big in attitude.

Songs of love, broken dreams and romances that might never have been are what comes screaming at the listener. From the second number ‘Long Long Gone‘, jealousy is portrayed and the mistakes made during a past romance; I’m sure we’ve all been there? Following on from here is what appears to be the continuation of this story: ‘Can We Do It Again?‘ brings the pace down and the subject of the song is now revisiting what went wrong – Whether to restart or just move on?>

Trying to reason his way out of a split, as he sings, “…masters of deception, amongst our closest friends, they’re crying out for protection and it starts to beg the question. Can we do it again?” Sometimes it seems that in any relationship there are several sides to the story and this is something the artist seems to be exploring.

As this number slides out, a song which is far more hopeful begins and “Sunshine In” strikes up. Our central character can be heard playing cupid as he sings “…Tonight we celebrate new beginnings, there’s no need to wonder when it could end and now that I have you right where I need you, I know we will never be unhappy again, again…“. These silky smooth numbers might seem as slippery as the perpetrator’s tongue, but with saxophone creating the mood music, all will fall under their spell. I have only referenced a few numbers here, but there are many more marvellous moments that I can recommend you explore and as a debut album can certainly see this singer rising to great heights. Funnily enough before playing this album I had been immersing myself in middle 80s Steve Winwood, with which  I can draw comparisons: both artists are well versed, some perhaps more than others in writing soulful songs, and this is what comes across. White soul music has been a genre which has been around for a very long time and with new pretenders like Nick Corbin rising through the ranks, one that doesn’t seem to be quitting anytime soon. The more I swim in this album, the more I am falling in love with this singer’s passion for what he’s producing.

Sweet Escape is out now on AC Records.