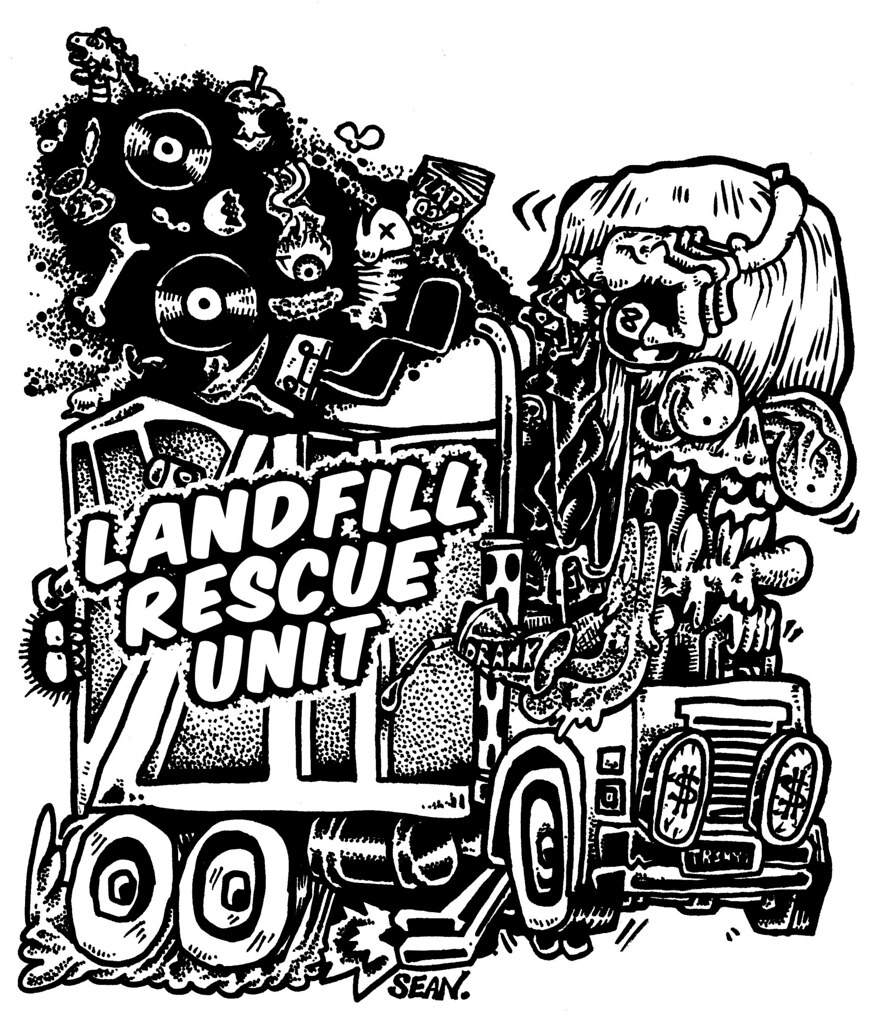 “Landfill Indie” was a term coined in 2008 by Andrew Harrison in Word magazine in response to the deluge of formulaic and musically reductive identikit bands flooding the charts following in The Libertines slipstream. Bands with names like Razorlight. The Kooks, The View, The Courteeners, The Ordinary Boys and The Kooks. And mostly bands with THE in front of their name.

Most of what was dubbed “landfill” was utterly dreadful: over exposed, identikit bands in skinny jeans and hair that looked like it had been smeared in lard. The music was often hideous too, following a formula, jangly angular guitars and frenetic percussion. Lyrics that were ripe with either emptily pretentious cliches about going out or the mundanity of working class life or, well, just yelping irritatingly big singalong choruses (hello The Automatic, the Fratellis et al). Similiar to the peak Britpop years when the labels were looking for the next Oasis, the labels rushed to find the next Strokes or Libertines and found some truly dreadful biege bands to push into the light. Even today we are left with the remnants, with examples of so called landfill still in the charts Catfish and the Bottlemen and The Blossoms.

The Guardian define it as: “What started with the Libertines and their lairy-yet-fey 2002 debut single What A Waster ..became an irresistible formula..latterly embraced by bands such as the Arctic Monkeys, Franz Ferdinand and the Kaiser Chiefs.

Eventually the template was adopted by too many, leading journalist Andrew Harrison to christen the resulting onslaught of unremarkable guitar rock “landfill indie”. By 2008, indie and its sartorial and geographical accoutrements (winklepickers, Camden Town, porkpie hats, T-shirts and ties) were not only deeply uncool but symbols of the folly of ever finding meaning in this army of Adrian Moles in ill-fitting blazers.”

Published last week Vice put forward their greatest 50 landfill songs list. Vice’s definition of landfill lacks nuance and ignores or skates over the existence of other scenes/waves of the time (art rock, new cross, electroclash, the shoegaze revival, indie folk et al), because if you lifted up the rock of the mainstream or the NME (obsessed with as their editor put it “good hair and good shoes“) back then, there were loads of exciting things going on.

Worst still Vice have turned the nebulous landfill term into an even bigger pigeonhole that they can sling any band who even looked at a guitar in the mid 2000s into. It’s quite reductive and written in a guilty pleasures style that’s half sneering at this period and half saying they secretly loved a lot of it anyway. But by playing into nostalgia and also the urge to dismiss the past, it gathered hits and started a conversation. Some of the entries are amusing and capture why the writer loved the song, but by making it such a big pigeonhole it has made the term as redundant as a lot of the music it is referring to.

Guillemots, Mystery Jets, Futureheads, Maximo Park, Young Knives, The Cribs even Editors (who I wasn’t even that into) weren’t landfill to my mind. How can a band from Eel Pie Island like the Mystery Jets with their dad in the band when they started really be landfill? Or three speccy blokes playing gonzo art rock like Young Knives? Or Guillemots who were more string led prog pop? Bloc Party came out of the new cross scene. Editors were part of a new wave retro revival that included the likes of The Killers and Interpol. The Futureheads who were more in the art rock wave influenced by the likes of XTC and Gang of Four? I am not even sure The Cribs or early Maximo Park fit.

For me, if “landfill” means anything it was more a wave of post Libertine/Kooks bands desperately gurning for success and hits. Its all arguable, “landfill” is a subjective idea, as our friend Andy Von Pip says landfill is just whatever we didn’t like back then, and it still holds today.

Then to top it off Vice omit some the worst offenders Hard-Fi, Scouting for Girls, Kaiser Chiefs, Franz Ferdinand, Ting Tings (who were “too innovative” for their list apparently).

My frustration is that there were all sorts of things going on in the early to mid 00s, various waves and scenes, so to lump some bands that weren’t even that known or that commercially successful in with laddish dreck like the The Courteeners, The Wombats and The Pigeon Detectives that was everywhere and tar them all with the landfill brush because they happened to be around at the time, is unfair.

I was particularly taken with the New Cross and art rock scene back then a group of bands who were on the Angular records compilations (Art Brut, Bloc Party, Luxembourg, The Violets, The Long Blondes) who had created an exciting DIY scene, the idea that anyone could do it anyone could “form a band”. I was also invested in the shoegaze revival (Engineers, The Raveonettes, M83), the indie folk sound (Emmy the Great, Patrick Wolf, Laura Marling et al) or the ensemble indie pop collectives (Los Campesinos,The Pains of being Pure at Heart, British Sea Power, Guillemots, Camera Obscura), electro pop was making a comeback too (Ladytron, Goldfrapp, Scarlet Soho et al) a new wave of hip hop and was emerging (Dizzee Rascal, Roots Manuva, Kano, M.I.A et al). Often these waves were largely sidelined by the NME at the time in favour of so called landfill.

So I have put together a playlist of roughly alternative songs of all kinds and artists from the period of the early few years of the 2000s to 2010, that I believe deserve to be rescued from the “landfill” era whatever it actually means and whether it actually existed. Either because they were never landfill in the first place, were under appreciated at the time, or were part of a different scene or sound and well to prove that the early/mid noughties wasn’t all about Johnny Borrell or Ricky Wilson.

1 thought on “PLAYLIST: Rescued from the “Landfill” era”