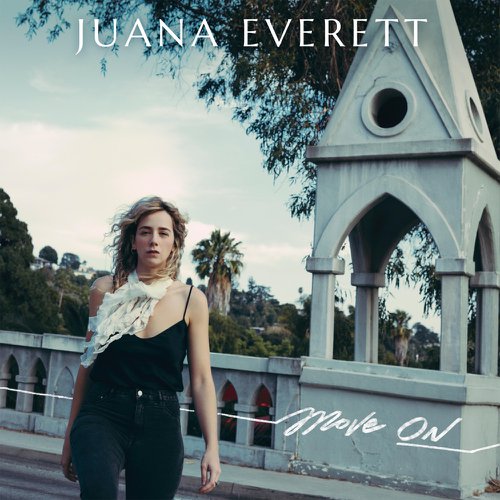 Juana Everett has had a tough time of it lately. Moving from Spain to LA, depression, psychological shifts, family issues, ending an unhealthy relationship, loneliness, isolation, and a change in musical direction. It’s taken its toll. But now she knows it’s time to leave those woes behind, and move on – which is exactly why she’s named her first full length album Move On. The nine track album is her first since 2015’s Golden Hearts, and sees a shift away from her aggressive and rocky Americana, to a more chilled and introspective folk rock vibe. Some of it is a bit ‘by numbers’ but right now I think we all want something comforting. No one wants to listen to an album of doom and gloom, and as personal as this is, it never feels uncomfortable or drags you down.

‘Drifter of Love‘ is the autobiographical opener and sees her telling the tale of “Early in the summer of 2016/Brave as I could be I left my home/I wasn’t sure of what I was chasing/why I carried on.”

‘Wind Whistle Blow‘ also looks back as she herself to keep going, even when things seem tough, “But I know that I can stand up on my feet/Telling myself to be patient.”

‘Light Up A Fire‘ is dark, describing the protagonist, which is Everett, fighting depression. But there’s always hope, as she sings “Yes I’ve wished for death/But I’m not the first one and I’m not ashamed/I found deep in me there’s still a flame,” then ‘Until The Sky Ain’t Blue‘ is an uplifting moment, celebrating love, commitment and romance. The eponymous ‘Move On‘ is the most riotous and energising of the track, uplifting and faster paced. Closer ‘Little Tragedies‘ is an almost catharsis, where Everett lets go of twists and turns. It’s calming, bathed in piano melodies.
It’s self produced, but she brings in musicians who excelled in their own genres and backgrounds to create interesting arrangements that elevate her melodies to something that embeds itself in your ear and has you bouncing away.

Mostly written during her first couple of years in LA, it was a period that saw her transform her feelings into tunes. And you get the sense she has done that well. It’s raw and exposed, and explores some very deep and personal concerns. Introspective, earthy and compelling. Charismatic and charming in equal measure.