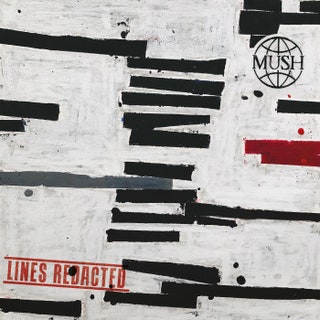 It doesn’t seem too long since Leeds band Mush put out their debut album, 3D Routine, but they are back already with the follow-up, Lines Redacted on the ever-reliable Memphis Industries label. With just under a year between the releases, it’s a real shame that this important period for the band has been virtually all under lockdown conditions, as they are a formidable presence in the live arena, playing well-received gigs with Stereolab, Girl Band and Shame as well as their own headline shows.

The good news is that their on-stage energy translates very nicely into the studio, with Lee Smith (who has previously worked with near neighbours The Cribs) at the controls really managing to capture the essence of the band.

Lines Redacted lopes pleasingly into life with ‘Drink The Bleach’, on which frontman Dan Hyndman pokes fun quite blatantly at a certain former World leader, singing “On the inside / Peroxide Dye / What could go wrong? / Blondes have more fun” in his distinctive vocal style which is possibly best described as a mixture of Bob Dylan and Goofy, and as such pushes him into the category of ‘quite original’. In truth, the vocals might be a deal breaker for some listeners, but personally I find them most pleasing.

The band’s music is crunchy and fresh and is a little reminiscent of the wonderful Stump in their more commercial moments, and maybe a dash of The Fall in there too. ‘Blunt Instruments’ finds Mush at their catchiest, though of course it’s all relative – there’s a little flavour of Radiator-era Super Furry Animals entering the fray on this one, (the first single from the album), especially in the backing vocals around the chorus. I realise that claiming that the band has elements of Stump, The Fall and Super Furry Animals may be enough to have discerning punters rushing to their local record shop with a sleeping bag and waiting for the end of lockdown, but I stand by the observation(s).

If I may be allowed one further band comparison, it would probably be that the guitars on the title track sound very Marquee Moon-era Television (you are almost certainly grabbing that sleeping bag now), but all of these comparisons are only meant to try to piece together some kind of porthole into a band that despite their apparent influences, really have something very original and special going on.

There are some great wonky pop moments too: ‘Seven Trumpets’ might not be Ken Bruce’s Record Of The Week any time soon, but is a very instant song (notwithstanding the unexpected slowdown in the middle) and ‘Hazmat Suits’ is another sure-fire hit in a rational world. It turns out that another uptempo track, ‘B2BCDA’, stands for ‘Back to back consecutive dark age’, which for my money would have been a brilliant album title.

Lines Redacted ends unexpectedly with a 7 minutes and 40 seconds epic called ‘Lines Discontinued’, Hyndman with his most restrained vocal performance by far while the track continues its unpredictable course, changing direction at will as it goes.

It’s an absorbing album that actually seems a lot shorter than its 47 minutes, which in my book is quite the compliment. Long may they mush.

Lines Redacted is out now on Memphis Industries.