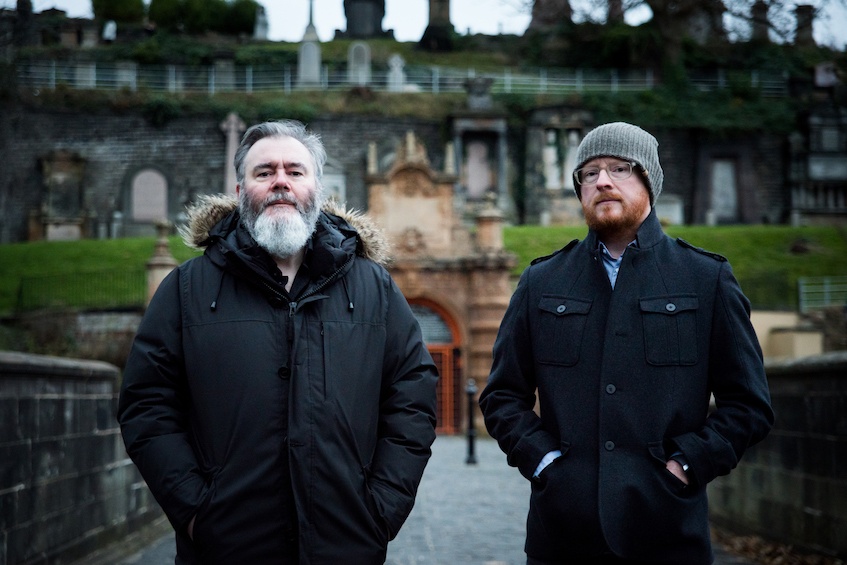 Arab Strap have unveiled the third single from their new album. Entitled ‘Here Comes Comus!‘ it’s described as an ode to the nights out that we are missing in current times. It’s taken from the forthcoming album As Days Get Dark, their seventh studio album in total, and their first for sixteen years.

In the words of frontman Aidan Moffat: ‘It’s about hopelessness and darkness -but in a fun way. It’s a song about the god of nocturnal excess and my inability to ever refuse him. It takes place in a pub, a club, and city alleyways, all the places I’d hoped we’d be able to enjoy again by now – but it’s been so long since I’ve had a big night out that listening to it now seems almost nostalgic. He still pops round to see me at home now and again, but I know he’s holding back and planning for the future, and one day soon we’ll dance again.’

The accompanying video would once have been described as NSFW, and certainly it is very dark. According to director Bryan M. Ferguson: ‘When I first heard Aidan’s lyrics on the track, my mind was quickly flung into a murky pit of complete debauchery and I really wanted the video to be a story of excess to match not just the lyrics but the whole mythology of Comus being the rebellious god of festivity who pretty much represents anarchy and chaos…I felt the video needed to explore these themes of overindulgence much like the protagonist. I wanted to make the viewer feel dirty and maybe even disgusted at their own enjoyment of the imagery.‘

The video, shown below, contains violence and content which some viewers may find disturbing.

As Days Get Dark will be released by Rock Action on March 5.