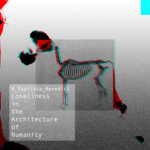 When I really think about it, has it only been eight years since I was introduced to M.BaptistaBenedict?

My introduction, like so many, was his 2013 album on Brainfeeder ‘Super(b)-Child-Ran’. That album is still the most fearless and ground-breaking album Steve ‘Flying Lotus’ Ellison ever put out. It was, and is, unlike anything else on the label. After I heard it, I started to try and find out more about the person who had created it. This has led me to a relationship with his music that has outlasted many I made at the same time. This is down to his ability to create wonky melodies and flagrant disregard to conventional composition. His Bandcamp page is filled with many albums that should have graced the end of year lists but were, like ‘Super(b)-Child-Ran’, criminally overlooked or ignored. Benedict had a fairly quiet 2020, but he has returned with one of his finest albums to date. The wonderfully titled ‘Loneliness in the Architecture of Humanity’.

There is a perverse satisfaction to completing a jigsaw. Everything has come together. You can finally see the picture of the smiling cat. Your time has been spent well. After listening to Loneliness in the Architecture of Humanity you get a feeling of satisfaction. This comes from how Benedict just throws out sounds and textures at the start of each song. You have no idea where it is heading, but for a wonderful moment it all comes together, and you finally hear the song as it was intended. This is mostly evident on opening track ‘Australopithecus’. It opens with ad-hoc beats, these as slowly joined back synths, basslines, and other musical sundries. When they all come together around the halfway mark you get what Benedict was getting at. You understand why that seemingly incongruous sound was introduced, because when it blended with that bassline and melody it became something else, and for the fleeting moments that followed it was the greatest sound on the Earth. Then, as always happens, the song moved on again and it all started to be deconstructed for that boss outro.

The rest of the album is full of these moments. ‘Evil Dissent’ is the closest Benedict has come to writing a pop song. When his distorted vocals intertwined with the stark beats and shimmering synths, you get the image of him standing on a stage, surrounded by pyro and a flashy backdrop at a big festival just after the sun has gone down. It’s that good. The final two songs feel like classic Benedict. ‘Anemoia’ is filled with twitching synths and hypnotic melodies. ‘Mortifer/Letifer’ is built around a wonky piano piece with skittering electronics whipping around it. It ends the album on a slightly melancholic vibe, similar to ‘Super(b)-Child-Ran’. This subtle nod for the heads is a nice touch and shows that despite making quite different music now, Benedict hasn’t forgotten his roots.

What Loneliness in the Architecture of Humanity shows us it that over the past decade Benedict hasn’t lost any of his charm, or ability to combine polarising sounds to create something breathtaking. It also shows that he is capable of surprising us. I never thought that he would have been capable, or dared, to release something so poppy and for it to sound as compelling and underground as the rest of his stacked back catalogue. If this is your first exposure to Benedict’s work, you’re welcome. If you are an old head just bask in the glory of a musician near the peak of his creative powers. This is nothing short of super(b).