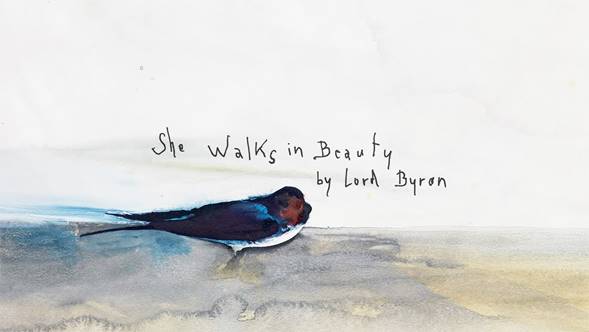 Marianne Faithfull and Warren Ellis have unveiled the title track of their forthcoming album She Walks In Beauty.

The song takes the words of the poem ‘She Walks in Beauty’ by Byron. It was written by Lord Byron after attending a party at Lady Sarah Caroline Sitwell’s on June 11, 1814, and falling under the spell of the beautiful Mrs Anne Beatrix Wilmot. It is reported that, upon returning to his rooms, he toasted her health, drained a tumbler of brandy, then sat and wrote the poem. The was published a year later in his volume of Hebrew Melodies. It was also the basis for Suede‘s song ‘Heroine,’ taken from their second album, Dog Man Star, released in 1994.

Faithfull says of the poem: ‘It’s very romantic, not like you imagine Byron to be…It’s so beautiful, and that’s why I like it. I love the other side of Byron too, but this is really amazing, sublime. And I was very drawn to the ability to do really beautiful rhymes. I think that’s from being a songwriter. It’s incredibly nice. Not what I connect with Lord Byron at all.’

Speaking of the album, and her love of poetry Faithfull adds: ‘When I was 13 or 14, I bought myself a book, Palgrave’s Golden Treasury, and that really turned me on to poetry, lots of different poetry,’ she says. ‘And then there was my English teacher at the convent, Mrs Simpson. I was studying for my A Levels in the year before I got discovered. Very happy. Then I was discovered and never finished them, but I learnt a lot and it never left me, so I had this idea all my life, really, that I wanted to make the most beautiful poetry record with music.

Warren Ellis has collaborated with Faithfull for a number of years, first working with her on her 2005 album Before The Poison. He has been a member of Nick Cave and the Bad Seeds since 1993, and has also collaborated with Cave on a number of soundtracks and albums, including this year’s Carnage.

She Walks In Beauty is released on April 30 on BMG. Other collaborators on the album include Nick Cave, Brian Eno and Vincent Ségal.