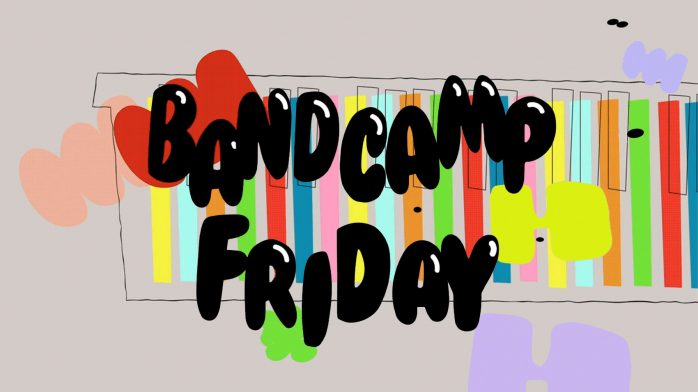 ‘Tis Eastertide, season of mists and mellow fruitfulness, and what better way to celebrate Jesus’ birthday than to score yourself a couple of new releases on Bandcamp Friday? For today Bandcamp waives their cut and everything  you spend, minus whatever PayPal is trousering these days, goes directly to the artist and labels.

So what would the little baby Jesus do? Well, at a guess he’d be looking around for a couple of ideas about what to buy, because like you, he’s a busy fellow. Things to do, Romans to see… he don’t have time for all that digital crate digging. Luckily, God created idle losers like me, just to tell everyone else what’s cool and annoyingly refer to records as vinyls.

You probably already know how brilliant the new Hannah Peel LP is, but I don’t care I’m determined to tell you about it anyway. Fir Wave is a reinterpretation of the revered KPM album Electrosonic – the music of Delia Derbyshire and the Radiophonic Workshop. Samples from the original are carefully nurtured and cross-pollinated with Peel’s own environmental and evolutionary concerns. Peel is an intriguing foil for Delia Derbyshire’s otherworldly oddness. ’Evocative’ and ‘Emergence in Nature’ are surprisingly uptempo, and elsewhere on the album, Derbyshire’s discordant and relatively jazzy compositions are refined into something smoother and more debonair. A thoughtful counterpart to the original’s lo-budget sci-fi savagery.

Qween Paz – Hold On Up

I’m very taken with this new single from Qween Paz. Blessed with not so much a voice, as a stunningly formless entity situated somewhere in the chymical realm of Minnie Riperton and Liz Fraser, they’re quite unlike anything else I’ve heard in a long while. ’Hold On Up’ deserves to be absolutely everywhere. Great bubbles of reverb envelop some blazing vocal acrobatics that enter complex abstract territory. A mesmerizing and visceral record that leaves you wanting to hear more.

Out in a few days on The Leaf Library‘s Objects Forever imprint, this compilation draws together exclusive tracks from their extended family of friends, collaborators and side projects, including Firestations, Wintergreen and The Nameless Brook. The smattering of tunes they’ve put up to tempt you into a purchasing the pre-release are absolutely superb. ‘Gimme Gimme‘ by Toronto’s beguiling happy-house chanteuse Pallas Athene sounds like Astrud Gilberto absent-mindedly getting her rocks off at Ibiza, while anrimael from Porto blows our collective minds with the bathroom dada of ‘Brush My Teeth‘. Available on cassette while stocks last. Gloriously distracted drones and warm fuzzy vibes.

Avant-popstrel Julia-Sophie’s new EP dissects a failed romantic adventure. Downbeat, distant and spectral, the songwriting pays homage to the jaundiced fatalism of Jacques Brel, who is apparently alive and well and living in some kind of dysfunctioning support bubble with Kelly Lee Owens. Bleak sweetness swathed in ecstatic dream pop that will get under your skin – if it wasn’t for the chilly atmosphere it could all get a bit mawkish, but the textural bite of the electronic experimentalism seals the deal.

Originally released last summer, this LP of ambient drones from Kenya’s KMRU is returning to vinyl on 21 April. Joseph Kamaru has been getting lots of attention recently and rightly so – his music, drawing heavily on field recordings, is of the stately old school. From the opener, ‘Why Are You Here‘, onwards we’re into deep, languid improvisations under the big sky. ‘Klang‘ swelters in claustrophobic noise and the 23-minute long title track that closes the LP is filled with tense, shimmering emotion.

KMRU is not to be confused with his father, the seminal Kenyan guitarist and singer Joseph Kamaru. JK Jnr has been assiduously promoting his dad’s legacy via Bandcamp, and students of Afrobeat will find a horde of forgotten treasure there.

My Name is Ian – Fantastic Company

Any Cardiffian with an ounce sense knows that lockdown is only really over at the point they walk into Clwb and see My Name is Ian supporting an inferior band. Their new album, Fantastic Company, is taking preorders for a June release, but until then you can stream the single, ‘For Love’ – a funky disco workout with an air of jaded New Romantic melancholy. For people who regard them just as a jolly novelty act, it might come as a pleasant surprise, but there’s always been a pathos to their songwriting, even at its silliest. This new track is very cool. We await the LP with considerable interest.

Comorian – We are an Island, but we’re not alone

Pre-orders are out for volume 8 of Glitterbeat records Hidden Musics series – field recordings presenting lesser-known sonic traditions from around the world. This one takes us to the Comoro Islands, located off the northern tip of Madagascar, and for the last 150 years caught on the trade routes between Africa, Arabia and colonial France.

Recorded live and outdoors by veteran field recordist Ian Brennan (Tinariwen, Ustad Saami, Zomba Prison Project), and played by a couple of local Comorian geezers, Soubi and Mmadi, the music has a fluidity and avant-garde freeness that’s easy to get swept up in. Tracks like ‘America, Crazy’ and ‘Love Must Come Before Things’ have a splendidly Exuma vibe going on, while the album opener ‘Please Protect My Newborn Child from the Spirits’ quickly transforms from humble folk-supplication to a full-on shamanic wig-out in the grand style. I don’t know what Mmadi’s saying but I wouldn’t want to be the unlucky spirit that comes anywhere near this guy’s kids. Excellent stuff, held together by some gutsy fingerpicking. The single, ‘Bandits are Doing Bad Deeds’ is out to stream today.

Initially released as a download last summer, Mzungu’s exquisite Moontides gets a physical release this month. The rhythmical interplay of the moon and the tides is suggested by electronically treated orchestral loops which shift around in shorter or longer phases. It’s a concept that is, as Mzungu’s Jonah Hebron acknowledges, an oldie but a goodie, and this is magical stuff. All profits for this release go to the mental health charity Mind, which seems appropriate. This is a seraphically pleasing hour or so of music, densely layered and enrapturing.

Mzungu’s Wormhole World labelmate Goodparley is also donating profits from his new single to Mind this month.  Described as an improvised musical comfort blanket and taking direction from Stars of the Lid and Grouper, ‘Disengaging‘ is a lush post-rock soundscape, accompanied by a freewheeling cover version of Erik Satie‘s Gymnopedies, which chickens out of giving us the thirty-minutes-or-so of this we crave. Excellent stuff

Pop perfection coupled with perceptive and often hilarious lyrics, Klypi’s particular brand of puckish roguery is not just in your face – it’s up in all your bits. And you like it. Unless it’s not for you, in which case there’s a song called ‘Not For You’ which is quintessentially not for you. Crude industrial electronics meet bubblegum Queer Pop. Klypi’s muse here is the boundless, melodramatic chaos of youth and their delivery catches something of the drive-in innocence of a bygone age, even as they demand to ‘Cum quick then die’. There’s something genuinely Bowie-ish going on here that has the potential for further mutation. One to watch.

Brigid Mae Power – I Had to Keep My Circle Small

This alternate cut of a track for Brigid Mae Power’s recent Head Above Water LP is out as a downloadable fundraiser for Cope Domestic Abuse Services in Galway, Ireland, and with that deft change of context, the song’s allusive lyrics about needing to pick sides and put your squad together take on a whole other complexion.

The album, released last summer, is still available from Fire Records and is well worth revisiting. Alistair Roberts and Peter Broderick lurk in the background while Power bares her soul. Timeless folk shot through with a contemporary worldliness – or you can just float away on that incredible voice. Big spenders can pick up her LP in a bundle with the Islet and Modern Studies vinyls.

From the discordant opening notes of the birdsong-drenched ‘Echo Outpost Terrain Music’, there’s a sci-fi feel to Between Worlds that calls to mind the scientist-consuming weird ecology of Jeff VanderMeer’s novel Annihilation or Tarkovsky’s Stalker. Menacing and seductively attractive, it’s a compelling landscape of shadows and echoes, half-recognised sonic organisms and dream-like realisations. Music for people who spent lockdown wondering what the world looks like to a bat.

Shpongos is an ambient concept album about fungi. In it, mycophile producer Polypores pays tribute to the invisible world of the interconnected network of mycelium beneath our feet, and upon which life on Earth depends, via the medium of his own interconnected ecosystem, the modular synthesiser. Burbling, woody bleeps convey a sense of the primordial life of a forest floor, of mysterious branching organisms and cycles of decay, digestion and renewal. A warm, peaty, consciousness-expanding spore-fest.

An alias of Angolan found-sound glitch-merchant Nazar, as lengthily featured in last month’s Wire, Yaera promises a less aggressive and more open-ended persona that’s up to the job of bringing his music beyond the formative years of intractable conflict documented by his album Guerilla. Elavoko 1, meaning ‘hope’ in Ubundo, is the first track under the new name and while it’s recognisably Nazar, it conveys a feeling of something else trying to escape – distorted vocals on the edge of intelligibility, growling synth noise swallowed by euphoric syncopations – it’s a tantalising hint of more to come.

If you’re not up to speed with Nazar, then Guerilla is still available on Bandcamp via Hyperdub and it’s well worth your time – an epic meditation on the Angolan civil war as seen largely from exile. Fair knocks your hauntological meanderings into a cocked hat.

Rather banging new single from Wesley Gonzalez, which he describes as being partly inspired by a performance at Green Man ‘absolutely off my nut’. I have a feeling I might have witnessed this particular festival appearance with a friend of mine who afterwards told me it was ‘possibly the worst gig I’ve ever seen’. Completely wrong of course, but praise of a kind. Flashy synths and soaring vocals (‘Hell is the heaven that we all deserve’) pitched somewhere between Elvis Costello and Martin Fry. The personal rendered duly epic.

If complicated young men with synthesizers are your jam then last year’s sterling LP, Appalling Human is around here somewhere…

Let’s leave it this month with a rather startling two minutes courtesy of Montreal’s Yves Jarvis. Last year’s LP, Sundry Rock Song Stock, was a glittering slab of clever indie chamber-pop if ever there was one, and didn’t get nearly the attention it deserved. Breathlessly quizzical and propelled along by light-fingered bassline, this majestically understated download will be on and off with the contents of your PayPal account before you can even ask what the fuck that was.