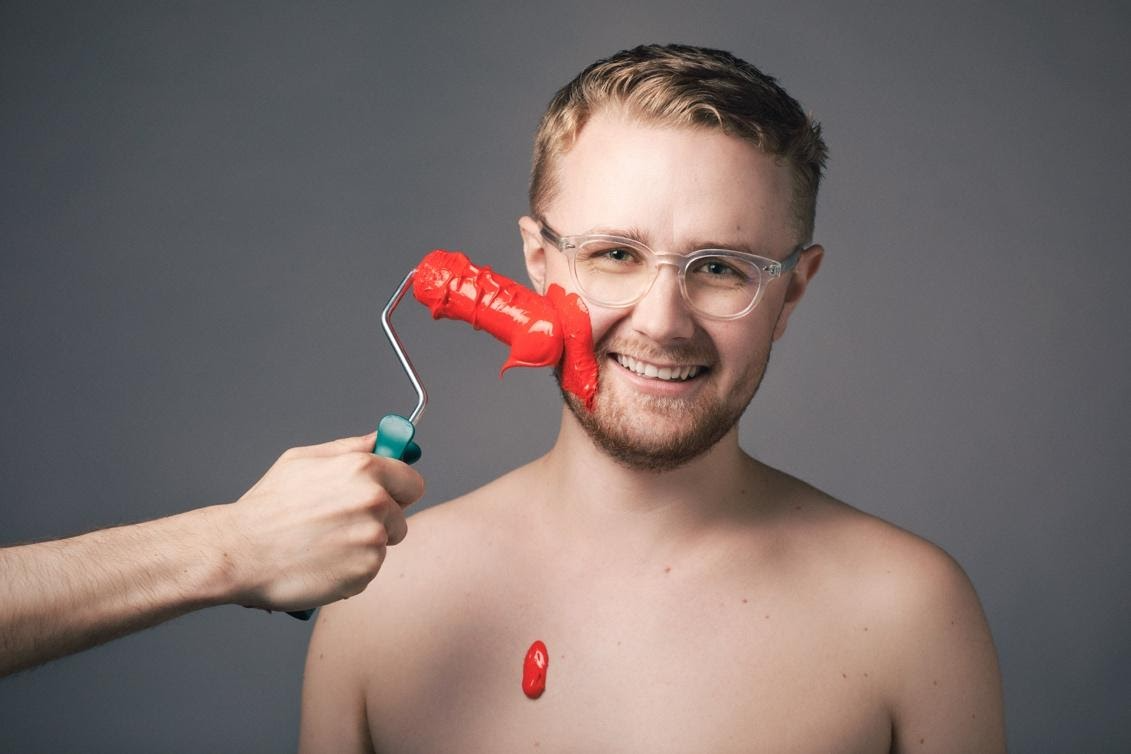 Swedish artist Filip Sjögren, with his band Hands Down, released their debut single ‘Too Late’, earlier this year, via Youth Recordings. The follow up single, ‘Paintroller’, similarly caught our attention with its rousing melodies that beautifully intersect with personal and emotive lyrics.

Sjörgren had taken a year off from working as a sound technician and producer to write these songs, and it is clear that he has a strong ear for melody and creating music that wilts and lifts within you. We were deeply impressed by these layered and sparkly songs, and look forward to forthcoming releases by the band.

I chatted with Sjörgren about how these recent tracks came into fruition, the role of songwriting in his life, his musical influences, favourite live concert, and future plans for music.

‘Paintroller’ made a big impression on me. I loved the lyrics and the overall sounds and feeling of the song. Can you tell us about the inspiration behind this track?

Initially when I wrote the song I was completely into making music with samples from my voice memos, the “piano” sample sound in the intro is from a memo on my phone. On the first demo it had a completely different melody and lyrics than what ended up on the released version. I didn’t really like the lyrics on the demo so my plan was to just change the lyrics and keep the melody, but I ended up just singing a completely different melody in the first the verse and the whole song just flipped and I just went with the flow from there. I think I felt very coloured by other people’s opinions and felt like I had a hard time expressing what I really felt about certain things.

Is the track a standalone release or will it be on a forthcoming EP/album?

It will be on an album!! Fun fact is that I actually wrote ‘Paintroller’ the morning after I wrote the first song on the album. That was when I said: I’m gonna write the whole album chronologically!? I’M A GENIUS. That didn’t end up happening. Like many of my ideas. But the album against many odds got finished and will be released this year!

I also loved your other single ‘Too Late’. What inspired this track?

This one also started with a piano voice memo, but the memo didn’t end up on the track as we re-recorded that part with live take. And I just got this line of “It’s all too late now” in my head. And I was really inspired by that lyric and piano sample, I guess, cause that’s basically the whole song.

You have also been working as a sound technician and producer – how did it feel when you released your debut single of your own music?

It’s fun to finally make music with no compromises. But also a little bit boring cause it hasn’t been any discussions about the songs. I will probably not write an album completely by myself again. It’s pretty lonely. Many cooks make a tasty broth in my opinion.

Your songs have such beautiful melodies and rhythms. How do you write your music – do the sounds or lyrics come first?

Thank you! Generally the sound comes first and then I write a lyric on top of that. Sometimes I have a lyric laying around and I match it to whatever I’m putting together at the moment. Sometimes I can’t come up with lyrics and I go crazy. It’s like having an urge to express yourself clearly but without having the tools to do it. However, I love instrumental music, it’s one of my biggest sources of inspiration.

It has a big importance for me in periods. For like two weeks it can be the only thing I think about day and night. And then for the rest of the year I have a hard time making anything. Mostly because of my job as a mixer and producer, my days are filled with so much music that I have a hard time to actually make something completely from scratch myself. I’m very grateful for that job situation. But a dream of mine is to only write and produce music where I’m also part of the band/artist releasing it.

The songs you have released are very personal – how does it feel sharing them with the wider world?

I haven’t really thought about that too much. They are very personal but I don’t feel like I’m exposing to much with these songs. I want to write music and able to connect with other people. And to that I think the lyrics needs some room for interpretation.

What is the best concert that you have ever been to, and why?

The best concert I’ve been to was a concert where three artists made one big set together and played each other’s songs. It was with Anna Ahnlund, Daniel Ögren and Monte Nour. Such a powerful trio. The songs are amazing and them together just made it for me. Another plus was that I was the sound engineer. So the sound was exactly how I wanted it, haha.

I’ve listened to the same album everyday for the past year. It’s called ‘If I Am Only My Thoughts’ by Loving. Such a great mellow sound. It’s been like a warm blanket for me.

I’ve been quite lucky. I have been making more music than I used to and I’ve started to work with digital events on the side since there’s less jobs on clubs as a sound engineer. And me and the band have been starting to write music together which is super exciting.

Finally, what are your tentative plans for the rest of 2021?

I try to not have any loose plans circulating. But here’s some stuff that will happen no matter what:
-Release debut album
-Make a music video
-Record second album

‘Paintroller’ is out now via Youth Recordings.