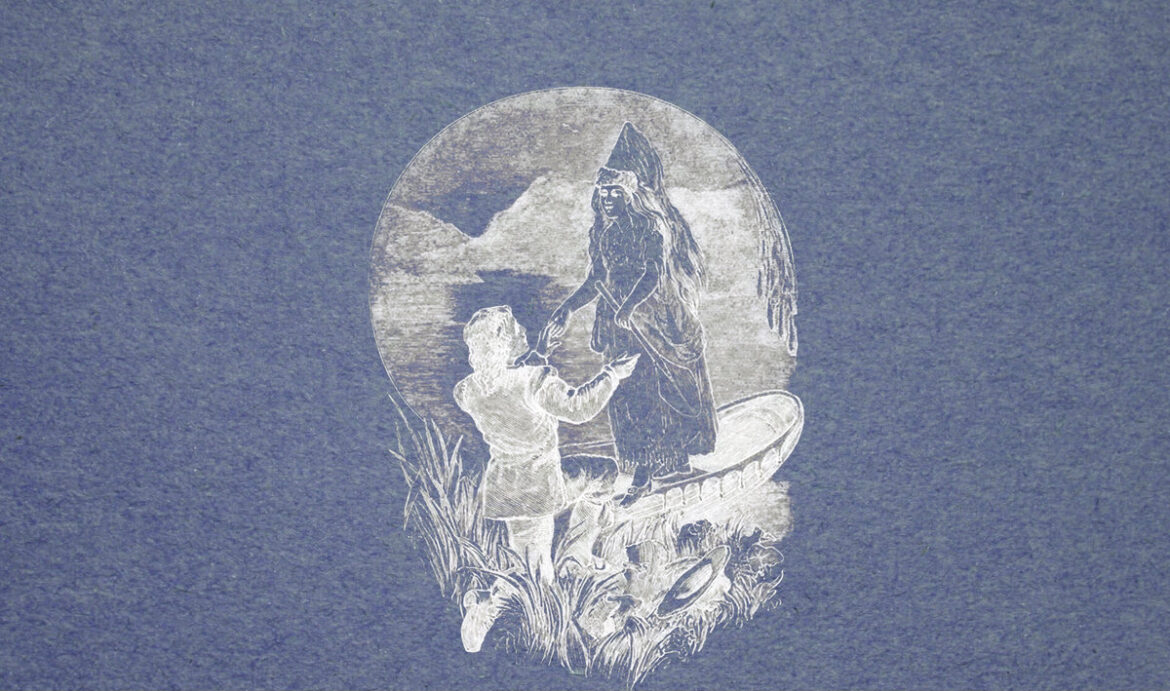 ‘I’ve half-jokingly said before that I want the songs to sound like they’re coming out of a dodgy AM radio in 70s East Germany,’ says Rhodri Viney a.k.a. bilingual doom-folkster Ratatosk, ‘something that could be familiar but not quite right.’

Better known as one half of Right Hand Left Hand, a high-concept, post-rock duo, whose last album, Zone Rouge, was an invigorating sonic tour of the despoiled and corrupted places of the Earth. Yn Canu is, unbelievably, his 11th album as Ratatosk. It’s out on Friday and we have two tracks, ‘Y Cudd’ and ‘The Remnants at Llyn Eiddwen’, exclusively to preview at God is in the TV.

‘It’s for the same reason,’ he continues, ‘that I’ve leaned into doing everything myself – there’s no doubt in my mind that it would sound better and more polished if I worked with other people on the recording, mixing and mastering side of things. But if I blunder my way through the process and get it into shape myself, it sounds more individual, more unique, and less like other things. Familiar, but not quite right in some way.’

Yn Canu, for benefit of non-Welsh speakers, is more or less pronounced ‘Uncanny’ – that class of the terrifying, which, according to Sigmund Freud, leads back to something long known to us, once very familiar. Viney sings in both Welsh and English on Yn Canu and explains that he likes homophones – words with similar sounds – particularly between different languages.

‘I was reading The Hobbit to my kids at bedtime,’ he says, ‘and while they’re in Mirkwood the word uncanny appears quite a lot. My 5 year old interrupted me to say ‘ni yn canu yn ysgol!’ (‘we sing in school’) – it felt perfect straight away, I knew it had to be the album title.’

‘Also, in Welsh, it reads like Ratatosk Sings, which I find quite amusing. There’s only one instrumental on it, so it’s probably singingest record I’ve made.’

‘My Welsh songs are always more direct and personal – this one especially so, describing my inability to function properly around other people, or by myself for that matter.’

He describes the song as being about the inner monologue that sabotages you in social situations, and the subsequent internal post-mortem in which you decide never to appear in public ever again.

‘It’s inspired by pretty much every conversation I’ve had.’

The songs come out differently in Welsh, Viney adds, rather shamefacedly, because he has a slightly better command of English.

‘I’m fluent in Welsh, I speak it every day, but the vast majority of culture I consume is in English, or has English subtitles. I’ve been trying to remedy this, I have a stack of Welsh books I’ve been meaning to get through, but the pandemic has totally killed my reading habits. It’s only now I’m getting that back!’

‘I like my lyrics to be opaque and indirect – slyly suggesting something rather than saying it outright. I just don’t have the linguistic skills to do this in Welsh. I try, but I’m rarely happy with the results, and I find simple honest statements work better.’

‘The initial placeholder lyrics were in English. I liked one so much that I just did a direct translation into Welsh, with the second line slightly reworded to scan better.’

Like many of the songs on the album, ‘Y Cudd’ took a while to find its current form.

‘I take my time when I’m recording because sometimes the best ideas take a while to come out – some of the overdubs can be magnificent, and require a change of direction for the song, so some of the original needs scrapping – the ending of ‘The Remnants at Llyn Eiddwen‘ sounds completely different from the originally written version.’

‘I was playing around with the original guitar part at Right Hand Left Hand rehearsals long before Zone Rouge came out, so I’ve had it a while. I knew it probably wasn’t suitable to do as an RHLH song though.’

Fans of guitar tuning trivia will be pleased to note that ‘Y Cudd’ is the only Ratatosk song that uses the same tuning as Right Hand Left Hand.

‘It’s all quite mundane really – pretty close to real life!’

The Remnants at Llyn Eiddwen

The second half of Yn Canu is taken up with a trilogy of songs documenting the landscape around Mynydd Bach in West Wales.

‘There’s a place around 10 miles south of Aberystwyth called Mynydd Bach,’ Viney explains. ‘It feels rough, raw and old. There’s an isolated monument on top of a hill and if you climb it, there are stunning views in every direction. I discovered this place as a teenager, and it’s now embedded in my soul – I return at least once a year.’

‘If you take a short walk from there down to Llyn Eiddwen, you will be rewarded. Hidden in the trees are remnants of old crumbling cottages, and abandoned gardens and paths. It feels like you’re the first person to stumble upon it for a long time. On the lake is an island, with more ruins – Tredwell Castle, a folly built by a Victorian playboy.’

The Victorian playboy in question was Mark Tredwell, a twenty-one-year-old Englishman who came to Aberystwyth in the 1870s to blow his inheritance. He had a lot of ambitious plans for the area, including the creation of a fake army called the Volunteer Corps who played war games in red uniforms on Mynydd Bach.

More prosaically he also tried to set up a local fire brigade and lifeboat service, but these efforts were soon lost to more pressing affairs – Tredwell’s fortune was consumed by disputes with builders and wild parties with loose women. He left Wales after a few years and died penniless in Surrey in the 1930s.

‘There is a discrepancy,’ sighs a wistful Viney, ‘between the days I’ve lived, and the days I fully remember. The passing of time is a glorious and horrifying thing to witness. At Mynydd Bach, time seems to stand still.’

Yn Canu is released on digital and CD with a handmade orgami sleeve on 16 July and is available to preorder from the artist’s Bandcamp: https://ratatosk.bandcamp.com/