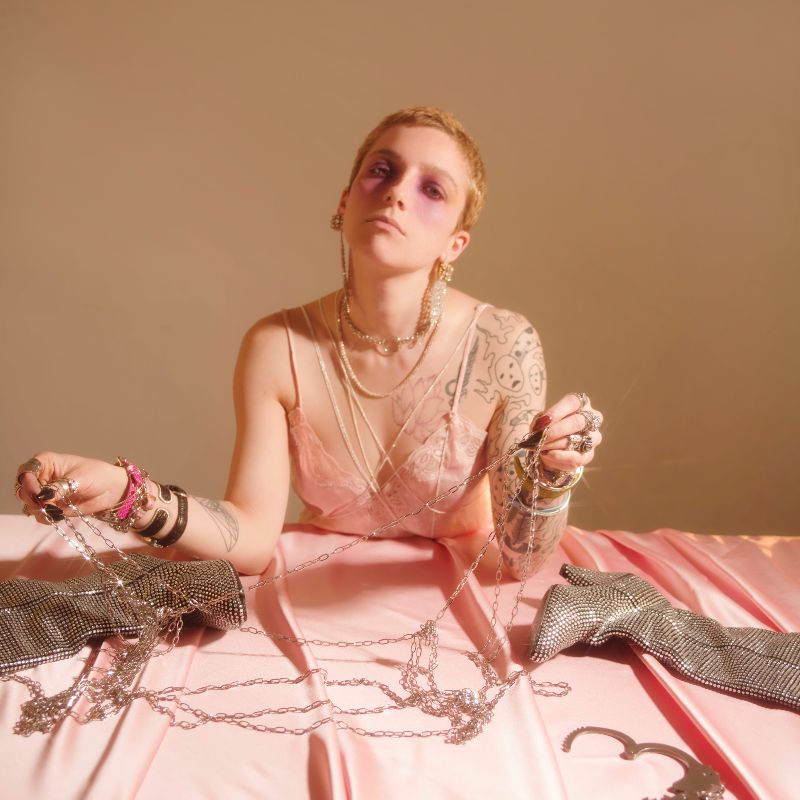 Flossing is the solo project of Heather Elle previously of bands including BODEGA and The Wants.  With her debut solo EP ‘Queen of the Mall‘ set to be released on 10 September 2021 via Brace Yourself Records, I caught up with Heather and asked her about going solo, her creative processes and influences and the impact of the global pandemic on her creativity.

Having been in bands (including BODEGA and The Wants) how daunting/liberating was it to work on a solo project?

It feels liberating to not answer to anyone but also daunting in that I don’t have to answer to anyone!  I intentionally brought in trusted collaborators to keep me on schedule and challenge my ideas.  A few of my friends were so generous to give me regular feedback and contribute musical ideas remotely without any expectations or ego.  I’m grateful for all the experiences and connections that came about with being in those bands, but something inside of me was also screaming…loud.  The industry can move so fast that it’s hard to regularly take your temperature and keep yourself in check.  I have a history of second-guessing myself and downplaying my talents, and when you do that to yourself, you give permission for those around you to do it to you, too.  I see it all so clearly now.

This EP was obviously recorded during the most difficult of circumstances with the global pandemic.
What were the main challenges?

Early on in New York City, the pandemic and protests were super intense here, to say the least, but I felt so disconnected from everyone and everything, especially myself.  A hibernation was long overdue.  I desperately needed to decompress and heal after all the touring.  On top of this, I made the painful decision to end a long-term relationship and move apartments, so there was a lot of emotional turmoil and spiritual unclogging going on while this EP was being compiled.  The pandemic just felt like a f*cked up blessing in disguise for me, because I went from what felt like 500mph to a screeching halt.  I’ve always had an issue with the word ‘balance’ but I’m trying to work on it now more than ever.

Lyrically what are you most influenced by? What do you want to write songs about?  How do you create the music, or does that come first?

I have this new rule that if I’m not amusing, arousing, or disturbing myself in the creative process than it’s just not going to work.  I’m very influenced by comedic and poetic devices; society’s sicknesses, habits, and obsessions; and my general brain vomit.  I write and record myself pretty regularly to later revisit, reframe, and repurpose for musical pieces.  Songs can come about in all sorts of ways.  It’s a lot of documenting lucid fragments that come to me in manic or lethargic states, and if I’m lucky, there’s some sort of coherence and cohesiveness that naturally occurs and is more recognizable once I’m more clear-headed, caffeinated, and concentrating.  I often need to surround myself with more left-brained and linear collaborators to help me sort through my messes, otherwise I’ll never stop daydreaming or throwing paint at the wall.

The combination of synths, lyrics which describe our at times ridiculous world, gripping basslines and videos full of creativity and imagination is a potent mix.  The video for last single ‘Add to Cart’ was directed by Devan Davies-Wood.  Is it a collaborative effort, or do you have clear ideas about how you want your music portrayed?

It’s a potent time, indeed.  Music videos are very much a collaborative effort when it comes to massaging out the creative vision and assembling the best crew needed to execute it.  With my sporadic production, theater, and improv comedy experience, I just love being involved in as many aspects of the process as possible without stepping on anyone’s toes.  Devan and I have a great creative chemistry, and bringing two of the three singles to life with him kept my chin up during the darker times.  Ali Yildiz of Analog Nation pushed me to do the second video unexpectedly which ended up being a stressful but wonderfully unique collaboration.  If people around you have interesting enough ideas you sometimes just have to lean in.  The next thing I’ll be working towards in the video realm is a surrealist live film once I figure out the band thing.

Now we are starting to see the music industry very slowly come back to life, do you have any plans to tour?

The goal is to tour around spring time when I release a “full length” double EP.  I’m not rushing to play local shows — we haven’t even had a first practice yet!  Currently Elijah Sokolow of The Living Strange and I are just focusing on getting this second EP turned in by Halloween.  I’m thrilled to have him write and produce with me this time around.  The next material is already sounding so much more next level.

And finally, if I looked in your fridge right now what would I find?

Lots of fruit, vegetables, and hot sauce.  What’s more important is what’s on my fridge — a flash photograph that my mother accidentally took right in Simon Cowell’s face in 2005 outside a ‘Saturday Night Live’ taping.  He’s been on every fridge I’ve had in NYC and is always watching and judging me! It keeps me on my toes.

Flossing’s debut solo EP ‘Queen of the Mall‘ is released on 10 September 2021 via Brace Yourself Records.
For more information check out bandcamp page.