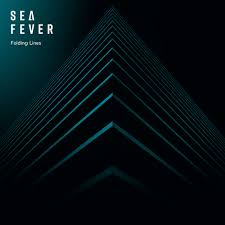 With an album due for release next week and a series of live shows towards the end of the month, Sea Fever are definitely a band that you should have on your radar. Fronted by Iwan Gronow from Haven and Johnny Marr’s band, alongside vocalist Beth Cassidy from Section 25, the five piece consists of talented musicians from various bands of renowned status – including drummer Elliot Barlow and New Order’s Tom Chapman and Phil Cunningham, with Phil on guitar, whilst Tom takes care of bass, guitars, synths and programming.

Having all possessed a desire to work with each other for a while, the band recently explained how them coming together as a unit felt inevitable – something that they perfectly capture on their effortlessly exciting and equally timeless ten track debut, Folding Lines. The album gets off to a strong start with the band’s catchy lead single, ‘Crossed Wires’ – a swirling electronic pop song that sees them fuse electronics with clanging guitars. Next up is ‘Under Duress’ – described to be a multi-layered orchestrated sonic ear worm about unrequited love, the track shines a light on not only the strength of Iwan and Beth’s vocals, but how well they compliment each other. A strength that’s also particularly apparent on ‘Afterthought’ – an intense yet irresistible track that offers a question/answer style set up between the two during the verses, before they join forces on its explosive chorus.

The word ‘idiosyncratic’ was made for Sea Fever and it’s impressive to hear such an eccentric array of sounds throughout the album- for example, the way they go from the uplifting sounds of ‘Satellite’ to driving electronic cuts ‘Le Coup’ and ‘De Facto’, before the guitar infused ‘The Finder’ and eventually, the emotive slow burner that is ‘Programme Your Life’. Highlighting the talents of each and every member of the band, title track ‘Folding Lines’ is perfectly crafted to include all of these sounds, whilst delivering some of the album’s strongest lyrical content about longing, promise and returning to a place that connects you with your past. With an ominous melody and dark harmonies, it’s one that’s sure to soar live at the band’s upcoming launch shows. Another track that’s sure to receive a rapturous reaction in a live setting is ‘Built To Last’ – some tracks are born to be crowd pleasers and based on its jaunty intro and pummelling beat alone, we’re confident in saying that ‘Built To Last’ is one of them.

Having already made their mark in the North West with their retrospective bands, it’s pleasing to see that Sea Fever have created a path and fresh sound of their own. Of course, there are sprinklings of their former (and current) groups throughout the album but it’s their experience and freedom to explore the music that inspires them that’s truly shaped the sound of Sea Fever.