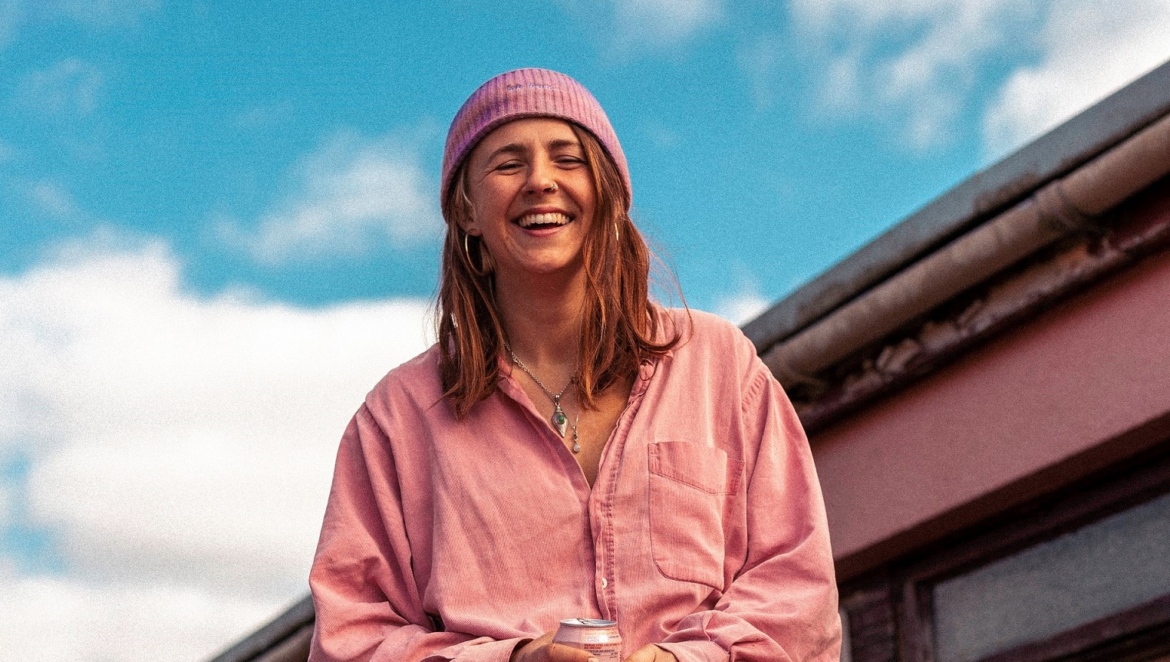 Rona Mac hails from rural West Wales. Between Gardening jobs she records raw, wonderful songs in her caravan, that deceptively draw, then envelop you in the way early Daughter, Jeff Buckley or Laura Marling could; her bruised vocal is a thing of striking clarity invested with heart, and speaks of trauma, identity and growth. She says “If I can talk about things we’ve been told we shouldn’t, and help people connect to feelings they tucked away in their teens, then I’ll be happy when I’m old”.

First coming to my attention with her superlative debut album ‘Sheelah’ in 2019, Rona, a queer artist, shows a beguiling maturity and emotional brevity in her work. She is one of the most exciting emerging talents in Wales right now. “I was at uni and I was trying various lifestyles at different places and I decided to come back to Pembrokeshire. On my list of things to do before I was thirty was to make an album” Mac explains via Zoom, “so I spent the winter making an album. I had always played music in collectives. I had been writing songs since I was nine years old!” she laughs.

“It was really satisfying to record and produce, but when it came to the release of the album I didn’t get to play any gigs. So it was cool when I came back I sold out my first gig with 200 people who were singing all the songs and I was like yeah this is amazing.”

‘Weapon’, her haunting single released on Rose Parade recordings earlier this year, showed her songwriting was swiftly developing, simmering with the reflection of a tempestuous relationship that eventually came to an end. Rona carefully carves a self meditative narrative around love, loss and a craving for simplicity with an indelible wounded vocal: “you really fucked me up this time” she sings brokenly, framed in clipped guitars, an insistent beat and elegantly drawn backdrops. “For me it  was just like writing in my diary really, it is like a cathartic therapy.” Mac talks about her songwriting: “If I am going through a hard time or whatever I can write a song and I feel like I have released a bit of it.” There’s a rawness to Mac’s work that comes from her approach to songwriting. “I suppose I just pick up a guitar or whatever, I press record and sing and play and sometimes it will be a few weeks later I find out what it’s about. That’s what I find most enjoyable so why would I do it differently? I find it fascinating, that process – how it can be like your subconscious coming out.”

“I don’t really have an intention of how it’s going to sound in terms of genre, it’s just like step by step process of sounds and seeing what’s enjoyable for me and see how people take it.”

Her new single ‘Polidics’ takes her home-production to a new level, this hypnotic vocal loop underscored by nimble guitar lines and a throbbing beat, the first single from an EP due out in 2022. “So ‘Weapon’ I did as a one off single with a friend in his studio; he co-produced that one. So this one was taking what I learnt from that experience and working on my own back in my studio caravan, so yeah it does sound a bit different.”

Speaking of frustration at the way things are with consumerism, class and power, ending with a hopeful vision where “we’ll rise, a bunch of honest creatures fill the skies”. Her voice is haunting and exquisitely drawn, giving voice to a generation who feel left behind. “I was watching TV and you know sometimes you are bombarded by all the adverts and I was watching the news and I was just like what is this world? I wrote it in 2019 around the time of Jeremy Corbyn standing for election and the sub title is “all I want for Christmas is the rebirth of our bae JC”, so it was just kind of a build up of frustration about everything and the second half opens up into the hope.”

“At the time I was unemployed because I live in a very touristy area and in the winter it’s hard to find work, and you watch the news and you’re like they don’t give a shit that I have only got 300 pounds to live off and that’s it! When you get into that role play of going to the job centre it makes you feel like you can’t get a job.” she explains, before talking about the news:  “It really is negative negative negative all day, it’s all just feeding you with whatever they think will make you watch the news basically, its torture porn!” she laughs. “It’s a control thing – that’s why I put about control and power rather than just saying politics, as there is so much more to it.”

The artwork for ‘Polidics‘ is a striking collage of pictures of people’s tongues with a pinkish hew. “It was all my mates at my birthday party, I kept asking my mates to stick their tongue out so I could take a picture of it and some of them were quite self conscious and I was like don’t worry it’s going to be anonymous! My girlfriend is a graphic designer so she helped me with it – she has helped me with all the artwork but this one especially.” She tells me: “It was this idea of the building blocks of society and it was about ‘Polidics’ being about people and the way they live and everyone stuck in these boxes, and politics and stuff, it’s these fleshy bricks building everything up, they’re brick colours as well.”

Recently we have seen cuts to arts and music in schools and attacks on culture by the Tory government, with venues and festivals under threat. Is the culture war really a war on culture by our own government? “When you really look at it, with art whether that’s graphic design, art and theatre, it’s in everything, so for them to cut that out from the bottom they are shooting themselves in the foot.”

Mac’s also been thinking about the value of music and art too. “If you have two paintings next to each other and it could be the same painting it could be created in the same way, but someone who has got status in the arts scene can sell it for two million and someone brand new on the scene can sell it for five pounds.” She explains “That’s the same with music – sometimes you are literally having to jump through hoops to get anywhere. I’ve heard it come up quite recently that lots of even successful bands say they still have to have a second job to make a living.”

“I’ve got an EP coming out, I think its going to be released in late February, so there will be another single coming out in in January which is called ‘Smoke’.” Mac explains sketching out her future plans: “The EP is five tracks and it’s called ‘Shades of Ham’ and the art is exploring the fleshiness of stuff and the theme of it being quite raw and gritty and I quite like the coupling of those two things together.”

“Focus Wales and Swn was just unexpected.  I’ve got a few in December but I’m planning a tour next year” she reveals of recent performances.

“The thing of having to look so far in advance, is not on my radar at all. I’ll decide that I’m going to release something like a month before and then I’ll release it, but I am learning to give things a little bit more time. There’s always new material you want to get on with and get moving with. The lockdown made everything a bit constipated too.” She laughs “I’ve previously had a lot of jobs over the last few years so haven’t had the time, but I’ve got a part time gardening job this winter. I have put aside some time for recording, so I’ve got this EP and another one in the works and I am possibly going to be working on a film soundtrack as well. It’s a female UK surf film about twenty five minutes long, they will do a draft of the footage and I will do a draft of the music and we will try and tighten it up with the music.”