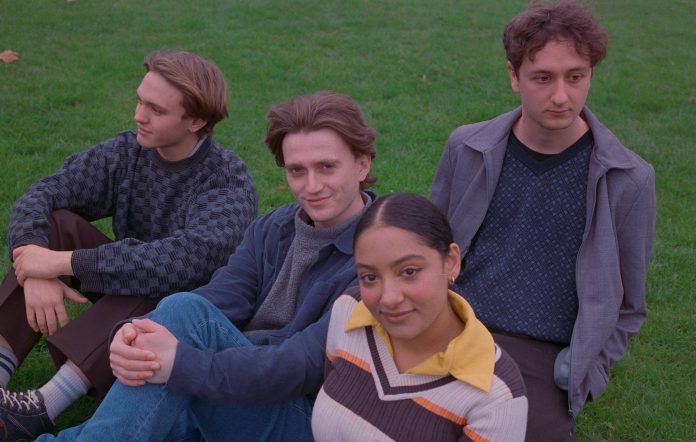 As we hurtle towards December here is another serving of fresh sounds, don’t forget to follow our playlist below.

Why we love it: Leeds’ quartet English Teacher have released their new track ‘Good Grief’ on Nice Swan records.  It opens with that wonderful cowbell sound.  There is so much going on in this song it is a perfect showcase of the talent of this band.  With a funky guitar riff throughout it is led by frontwoman Lily Fontaines.  Clear and smart we can hear the lyrics which reflect on the absurdity of the times we are living in.  And then a shift about two-thirds through with a building of chaos and confusion with an abrupt stop, and back to that fabulously funky guitar riff.  There is a cheeky end to this song and it gives ‘Good Grief’ a thought-provoking finish.

The band further expands on ‘Good Grief’: “The track follows the love story of Track and Trace as they navigate their relationship through 2020. It’s about the virtual dates, the TikTok dances, the Karens in supermarkets and the obscene levels of potentially avoidable suffering, once again, orchestrated by those at the top.”

Why we love it: Anne Briggs is one of Britain’s great lost voices. An integral part of the the great British folk revival of the 1960s, the woman who inspired the songs ‘The Pond and the Stream’ and ‘Beeswing’ by Sandy Denny and Richard Thompson respectively had effectively turned her back on a career in music by the early ‘70s. She moved to the Hebrides in 1973, and later became a market gardener.

Anne Briggs is not forgotten, though, not least by Devin Hoff. The American musician and songwriter has been thinking about Anne Briggs for a decade, and he has now recorded an album which revisits her music with a series of collaborative partners including singers Julia Holter, Shannon Lay, Sharon Van Etten and Emmett Kelly; oud player Alejandro Farha; saxophonist Howard Wiley and drummer Jim White. The album, Voices From The Empty Moor (Songs of Anne Briggs) was released last Friday on Kill Rock Stars.

The first single from the album is ‘Let No Man Steal Your Thyme’, featuring the otherworldly voice of Los Angeles avant-artist Julie Holter. Together Hoff and Holter combine to chilling effect with an eerie interpretation of the traditional folk ballad first recorded by Anne Briggs almost 60 years ago. (Simon Godley)

Why we love it: The American musician, actress, composer and performance artist Bitch will release her brand new full length album Bitchcraft, on the 4th of February 2022 via Kill Rock Stars. In anticipation of the new album the legendary queer music icon has just shared the second single from it, ‘Easy Target’.

Speaking about ‘Easy Target’, Bitch says, “It’s about how we have to ‘take it like a man’ and figure out how to be proud anyway. Watching women tell their truth and still ‘the man always gets his way’. Watching Bill Cosby go free. Tarana Burke and the scrutiny she faced. Anita Hill. The hundreds of women athletes that were abused by Larry Nassar. How our society barely trusts women. Britney Spears. Now Texas.”

A strong and incredibly powerful indictment of the disadvantage and discrimination faced by women on a daily basis, Bitch’s hard-hitting message for female empowerment gains even greater traction in the week that saw the liberation of Britney Spears from her nearly 14-year conservatorship. (Simon Godley)

Why we love it: Dublin band Bullet Girl have released their new single ‘The Hunt’ ahead of their debut EP Talking Pony which is due in 2022.  The track explodes from the get go.  Full of thumping bass, spikey guitar riffs and pounding drums.  It’s an angry, confrontational track full of vitriol for greedy politicians and landlords who perpetuate the housing crisis in Ireland.

“Politicians hunt the poor for sports.”

The vocal is impassioned and fierce, boiling over with frustration and helplessness to counteract those in power.  Hard-hitting and through-provoking Bullet Girl have produced a track which has  fire in its belly.  The electric guitar riff has a prevalent part to play and along with that drumbeat it grabs your attention.

Incredibly powerful and passionate with that anger reflected in the guitar reverb ‘The Hunt’ stays with you long after the track has finished. ‘The Hunt’ was recorded with Girl Band bassist Daniel Fox who has worked with a number of Irish bands throughout lockdown including Sprints and Turnstiles.

Why we love it: Maybeshewill, the instrumental five-piece from Leicester in England have not released an album in more than seven years. But all that is about to change this coming Friday, 19th November when No Feeling Is Final is released on the band’s own Robot Needs Home Collective Label, in collaboration with close friends Wax Bodega (North America), New Noise (Asia) and Birds Robe (Australasia). And to herald the arrival of what will be their fifth full-length album, the post-rock outfit have just shared their new single ‘Green Unpleasant Land’, a song inspired by the 2020 book of the same name by Professor Corinne Fowler, which explores the countryside’s repressed colonial past and its reputation as a retreat from urban life.

Expanding upon this, the band say “Fowler’s writing challenges the (often unspoken) notion that green spaces in the West have and should be the preserve of white people. The track seeks to draw attention to this insidious strain of racism that is deep-rooted within our society.

Green Unpleasant Land is something of a stylistic departure for the band, making musical reference to folk and traditional music from the British Isles. Its foreboding air of unease and unsettling finale are heavily indebted to the cinematic genre of ‘folk-horror’, as typified by films like Blood on Satan’s Claw, The Wicker Man and Midsommar, all of which convey a morbid fascination with the darkness of the rural landscape.”

Maybeshewill will also perform their first London headline show since 2016 at Islington Assembly Hall on 15th December 2021. Tickets are on sale now.

Why we love it: Mysterious artist ANU illuminates and captivates with this slice of reverent techno, with the equal of Orbital and Justice this gradually enveloping electronic tapestry of pulsing beats, synth stings and ambient passages.

“Worshipped by the first human civilization, the silent and enigmatic masked sky god ANU has journeyed through time and space on a vast odyssey of discovery.” (Bill Cummings)

fanclubwallet – ‘That I Won’t Do’

Why we love it: fanclubwallet is the project of Ottawa-based Hannah Judge, who released her debut EP Hurt Is Boring earlier this year. Wistful and insiduous organ motif, fuzzy guitars underpin Judge’s self explorative melody, unsteady and unsure unfurling into revere. It was made while Judge suffered a Crohn’s disease flare-up which left her bedridden in her childhood home for 10 months.

With her illness now in remission, Judge explains that the new track was written about re-learning how to re-enter the world and socialize. “When I wrote “That I Won’t Do” I was recovering from a year long illness and re entering into the socializing world (like so many others post pandemic). The song is about dealing with a new relationship/friendship where you aren’t sure whether the person is good for you or not, and you’re not feeling like yourself. It’s about trying to break bad habits while not wanting to break them at all.”